Direct bottle printing may cause sleeve market to shrink 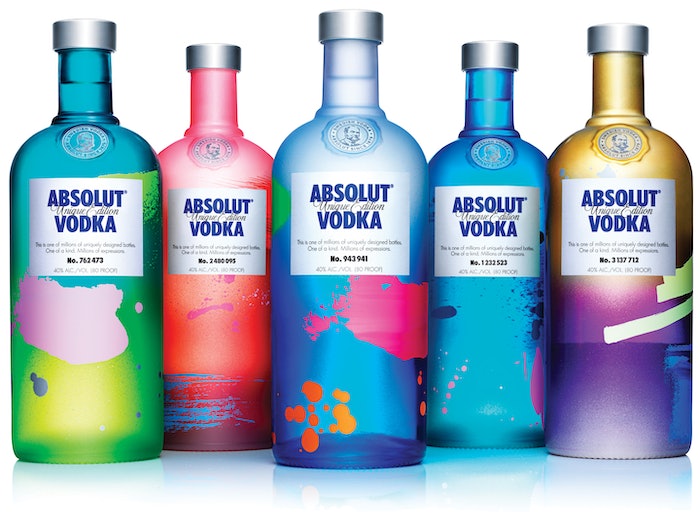 Hints of this coming deco-revolution were evident at Pack Expo 2012. Hartness International, for one, was showing a bottle of Lips of Faith ale from New Belgium Brewing that is screen printed with UV Hartness Ink. The Hartness process runs faster and uses less energy than a traditional applied ceramic labeling (ACL) line. To us, the resulting Lips of Faith label had a higher def quality than an ACL screen. Elsewhere at the show, at least two other exhibitors were holding private discussions about their direct-to-plastic bottle decorating initiatives. And a quick check of recent patent activity suggests interest in direct bottle decorating is definitely being stirred.

“Shaken, not stirred” is how some elements of the labeling industry are reacting to the dramatic global rollout of a limited (four-million bottle) run of “one of a kind” Absolut Unique vodka bottles, each having a different color coating and pattern as well as its own unique label number. “We developed a computerized valve and control system to automatically and continually change colors and spray patterns on the bottles,” says Fredrik Källqvist, development manager Glass Sweden & Denmark at Ardagh Group, producer and decorator of the bottles.

Bottles then move to a screen printer from Fermac, s.r.l. where, using inks from Ferro Corp., a variety of anamorphic designs is added. Absolut’s website offers a general description of the operation: “Splash guns and color-generating machines were set up and complex coating, pattern, and placement algorithms were programmed in to ensure that no two bottles would be alike. Thirty-eight different colors were used, and 51 pattern types were applied to the bottles. A striking look was achieved by color contrasts and a white, matte paper label that features each bottle’s unique number.” Absolut’s printing algorithm is unfathomably capable of producing 94 quintillion (that’s 94 with 18 zeros) distinctly decorated bottles—no two alike. This YouTube video gives you a peek at the line, and some of the thinking behind it: http://youtu.be/toHQCrb4a38.

Been there, more or less done that (a long time ago).

Molded to resemble colonial glass whiskey flasks, the bottles were blown from gobs that oozed out of a single tank to which amber, blue, green and purple colorants were added without purging the tank. The result was a seemingly infinite array of bottle colors on the shelf.

To this day, the Lestoil colonial bottles, faux antiques though they are, can be found on eBay and shops selling collectibles.

For Absolut, the launch of four million uniquely decorated bottles has set collectors clamoring for the rarest five digit-and-below Unique bottles. And the launch is adding new urgency to a number of bottle decorating developments expected to see market light in the next year or so.