A collaboration between UPS and TerraCycle results in the creation of a reusable shipper, the Loop Tote, optimized to flow smoothly through UPS’s transportation process and provide consumer convenience. 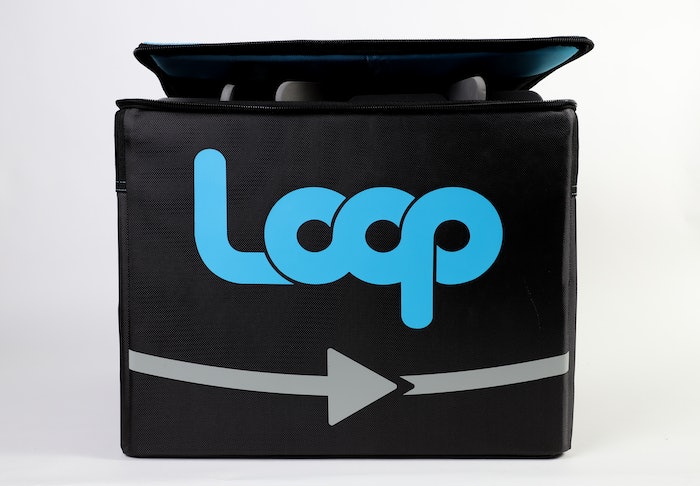 UPS helped engineer a durable, reusable tote that will be used to deliver Loop products and pick up empty packaging.

One of the key components of the Loop circular shopping platform is the transportation logistics that enable the products to be delivered to the consumer’s doorstep and the packaging to be picked up and returned to TerraCycle for cleaning. Since mid-2017, long-time TerraCycle partner UPS has been involved both with the design and testing of the Loop Tote as well as testing primary package designs for e-commerce shipment.

“We’ve been working with UPS for such a long time, it was natural they would be our partner for this platform,” shares TerraCycle VP of Global Business Development Toni Rossi. “They were really great in steering us toward questions and things to consider while developing the tote.”

According to UPS Package Engineering Manager Quint Marini, UPS has experience helping customers design packages for one-way shipping. But the Loop Tote was unique in that it required a design that would allow it to be used “over and over and over again.” He says the first step was learning what TerraCycle needed the tote to do and then explaining to them the UPS transportation process.

One consideration was balancing the weight of the products inside the tote. “A lot of times when there’s a weight shift, it affects other containers inside,” says Marini. “So you really have to devise a nice, internal divider system to keep things away from one another number one, and number two, to keep the weight shifts from occurring.”

Other considerations included the durability of the materials, the closure method, and how and where the shipping information would be displayed to allow the package to flow smoothly through the network and ensure barcode readability.

Says Rossi, first and foremost was ensuring the tote would be as durable as the primary packages it was designed to transport. “Creating this type of platform and then having single-use packaging for the shipping is not in the spirit of what we’re trying to create,” he says.

The TerraCycle design team led the project in-house, and when expert knowledge on packaging materials and components was required, it worked with its suppliers. Once TerraCycle had a prototype, UPS tested the tote at its ISTA-certified Package Design and Test Lab in Aurora, IL, to identify weak points in the packaging. After going back and forth two or three times with testing and design tweaks, Marini says the tote was ready for field testing. “The field testing helps us really evaluate the whole system, but more importantly, the shell of the Loop package,” he explains.

The resulting tote measures 19 in. L x 16.5 in. W x 15.5 in. H and is made with a washable, heavy-weight nylon fabric. Inside, a flexible foam grid holds products of varying sizes in place. The tote uses a zipper closure with a tamper seal that is removed by the consumer. On top of the tote is a clear pouch in which the shipping label is placed. Handles on both sides of the tote make it easy to lift and carry.

Through field testing, TerraCycle realized the need to make the tote and the dividers collapsible. “When we are looking at the markets where we’re launching—New York and Paris particularly—space is not a luxury most people have. Creating a tote that can collapse and can be easily stored away was something that was important, so we built it into our design,” Rossi says.

For the frozen supply chain, TerraCycle uses a two-pronged approach. First is the design of the primary packaging. For example, Nestlé created a double-walled, stainless-steel container with thermal properties for its Hägen-Dazs ice cream that, along with the tote, “keeps the ice cream fresh and cold from the moment the canister is filled until it is delivered to the consumer’s home,” says Nestlé. The second part is a component, almost like a cooler, with reusable eutectic plates inside, that slips into the tote. “So, when you couple the thermal capabilities of the package and you add it to that frozen chamber, that allows us to ship something frozen, and there’s no waste whatsoever,” explains Rossi.

UPS also helped TerraCycle with guidance on primary package design for e-commerce shipment. During testing, UPS identified solutions to mitigate material breakdowns, product leaks, exterior packaging design that shows signs of fatigue after limited use, and scratches on metal containers caused by metal closures. Among its recommendations were the use of multi-threaded closures for product containers and a modified capping approach to reduce the risk of leaking products.

From this, TerraCycle’s Loop design department developed a brief for its brand owner partners with design suggestions, such as the types of materials that work well and those to avoid. “Our advice is to steer clear of, for instance, using a thin-walled sodium lime glass, because we know it’s going to break in transit. Use a thicker glass, such as borosilicate glass,” says Rossi. “All of those suggestions are definitely part of the process we use to on-board new partners into the Loop platform.”

Part of the goal of the trials in Paris and New York in spring 2019 will be to continually test the durability, the shippability, leakage issues, and cleanability of brand owners’ package designs, so that by the time a final design is reached, “all those boxes have been checked,” says Rossi.

Through UPS, the totes will be delivered to consumers and picked up within 24 to 48 hours after the order is placed. As with the packages inside, the tote will require a deposit from the consumer. That amount has not yet been finalized, but will be announced before the May rollout.