Hummus & chip snack pack served up in a can

Tribe Mediterranean Foods introduces a new snack combination of hummus and pita chips packaged in a composite can designed for convenient, on-the-go consumption. 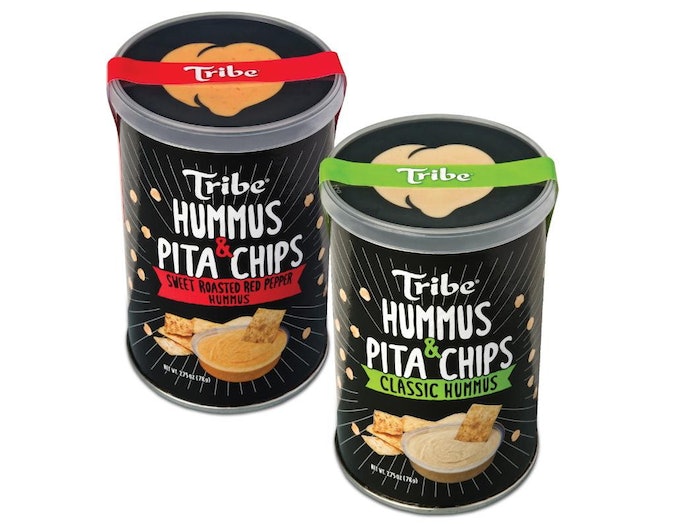 Have a hankering for healthy snacks on the go? If so, you’re not alone. According to the 2013 “Healthy Snacking” study from Mintel, 65% of snackers are interested in healthful snacks, with 36% of snackers eating their snacks on the go. Addressing this market, as well as the spectacular spike in sales of hummus snacks—up 77% this year in units sold—Tribe Mediterranean Foods, Taunton, MA, has introduced a handy, backpack- and cupholder-friendly Hummus & Pita Chips snack pack in two varieties.

“Innovation is crucial to Tribe’s success,” says Tribe CEO Adam Carr. “We’re consistently looking to create products that best serve the taste buds and lifestyles of our consumers. Our new To Go pack allows us to be more mobile and not only play in snack-heavy spaces, but also stand out as a smarter, more healthful option.”

Introduced in July 2014, Tribe To Go is packaged in a category-disrupting composite can that holds a portion cup of hummus and a snack bag of pita chips inside. The can not only delivers product protection and portability, but it also provides plenty of space for fun and playful graphics that beckon snack-seeking consumers.

To ensure its secondary packaging would meet all of its functional and aesthetic needs throughout the supply chain—from filling through to consumer use—Tribe worked with packaging and services provider Sonoco and its print management subsidiary, Trident.

CHECKING OFF THE BOXES

When Tribe first approached Sonoco in late January 2014, it had a vision of the package it wanted Sonoco to create and an extremely aggressive timeline—a tentative launch date of April 2014.

Among its requirements, Tribe was looking for a package size and construction that would work with its existing, proprietary filling processes, would offer portion control, on-the-go convenience, and resealability, and would allow the product to be distributed through different channels, including retail, vending, theatres, airports, and others. “And of course they were looking for an attractive package that would draw the eye of the consumer,” adds Derek Trader, Marketing Director for Sonoco. “They wanted to stand out, while being consistent with the branding for their existing products.”

Sonoco Global Corporate Customer Account Manager Robert Goodson adds that Tribe also wanted a package that would allow the 57-g thermoformed cup of hummus to rest on top of the bead, or rim, of the can. “So after the overcap was removed, and the lidding of the hummus cup was peeled away, the cup would be the first part of the product that was accessible, and it could also be resealed with the can’s overcap,” he says.

To come up with a design that met Tribe’s needs in the time allotted, Sonoco employed its i6 Innovation Process™, made up of six steps: insights, ideation, invention, integration, interaction, and iteration. “We start with the customer strategy at the center, and as quickly as possible, we narrow the focus down to the most appropriate solution for them,” Trader explains. “When you have a number of different package platforms that you can bring to bear to solve the problem for the customer [as Sonoco does], you can develop a format that is most complementary and most supportive of their brand strategy.”

The final design for the Tribe To Go package is a 2.75-oz spiral-wound, composite can that measures approximately 4.5 in. tall and 3 in. in diameter. The can is constructed of, from the inside, a paper/film/high-density polyethylene liner—providing a barrier for product protection—adhesive-laminated to a recycled paperboard layer that gives the container physical strength to hold up through distribution and use. A preprinted label makes up the can’s outer layer.

A clear, pop-top lid, sourced by Sonoco, covers the can, under which is the hummus dip container. The thermoformed cup from Winpak rests on bead of the can and is covered with a lidding film printed in black except for a see-through area in the shape of a chickpea that allows consumers to see the hummus inside. Underneath the hummus dip cup is a 21-g bag of pita chips, protected from breakage via the rigid secondary pack.

Says Trader, “Tribe came to us with some ideas about what the package needed to do for them, but they didn’t exactly know how to execute properly in order to be able to check off all the boxes related to their filling, distribution, and retail requirements. So they relied on Sonoco to be their consultant and help them address the needs of each stakeholder along the way.”

Label graphics for the can are fun and playful, while utilizing established Tribe brand equities. Explains Margie Lewis, Assistant Brand Manager for Tribe, “We wanted to stay close to our eight-ounce Tribe line so consumers would recognize the brand in other unexpected locations.”

Designed by Vessel Ideation, graphics pop against a black background that stands out sharply in the refrigerated hummus section. Elements include the Tribe logo in white, the casual, almost hand-drawn font of the 8-oz pack, also in white, and illustrations of chickpeas—in this case a veritable explosion of Garbanzo beans—that surround the copy and an image of pita chips and dip on the front panel. Banners in red or green positioned underneath the product name identify the Sweet Roasted Red Pepper Hummus and Classic varieties, respectively. Covering the overcap is a strip of red or green tape, decorated with the Tribe logo, that provides tamper-evidence as well as further branding.

A further lighthearted design can be seen on the flexible bag that holds the chips. The matte-black bag is decorated with humorous copy and illustrations in white of different chip-dipping styles. Among them, “The Last Bite,” “The Helicopter,” and the “Sinker Recovery.” Says Lewis, “We wanted our pita chip bag to stand out, and so we designed it around the fun and unique styles of dipping.”

Label converting is done by an outside supplier, sourced by Sonoco, that flexo-prints the material in six colors, plus a UV coating, which Goodson says was added to give the label some additional impact. Prepress work, including artwork management, color separation, and layout for the spiral-wound label as well as flexo platemaking, was done by Sonoco subsidiary Trident.

Tribe To Go is currently available in retail and grocery stores such as Stop and Shop, Albertsons, and Jewel for an average retail price of $1.99 to $2.99/can. Tribe says it plans to expand to other venues by year-end.