Hypertherm redesigns packaging for 220 SKUs of metal-cutting consumables for a more environmentally friendly clamshell that protects against product counterfeiting.

Hanover, NH-based Hypertherm®, Inc. is a designer and manufacturer of advanced cutting equipment and consumables that was established in 1968 when its founder invented water-injection plasma-cutting machines. The company distributes its products worldwide through an extensive network of distribution and OEM partners to customers in industries such as manufacturing, shipbuilding, and automotive repair, as well as to artists and home hobbyists.

In late 2012, as the company’s Manual Torch & Consumables division prepared to launch several new, larger-sized products, it determined it was time for an overhaul of both its package structure and graphics. The company had already been contemplating such a change to address several emerging issues, and the fact that the new consumables would not fit in any of the company’s existing packaging provided a perfect impetus for the new project.

“We were seeking new packaging designs that would improve our retail appearance, streamline the number of different packaging designs required to package our consumables, use recycled packaging material, and reduce the overall size of our consumables packaging,” explains Brenda Mahoney, Product Marketing Manager for Hypertherm’s Manual T&C division. Another prime requirement for the new design was the ability to provide greater brand protection against counterfeiting.

After meeting with thermoform supplier Placon at a packaging trade show and reviewing the new packaging concepts they proposed, Hypertherm selected them to lead the project. Says Mahoney, “Their innovative approach and comprehension of the objectives we were trying to achieve led us to want to work with them as a new supplier of our clamshell packaging.”

Eco concerns at the forefront
As Hypertherm outlines on its website, a core value of the company is environmental stewardship. “Hypertherm’s vision of environmental sustainability is embedded in our cultural norms and reflected in our long-range business planning,” shares the company. Because of this, with the package redesign for its consumables, the Manual T&C division sought a more environmentally friendly solution.

Likening the consumables for a cutting machine to the razor blades for a razor, Mahoney emphasizes that Hypertherm sells a lot of these items—which in turn, requires a lot of packaging. Under the existing system, the company was maintaining six different clamshell designs in varying sizes made from polyvinyl chloride. One of the environmental issues Hypertherm identified was that while the PVC material was recyclable, it could not be made from recycled content. In addition, the design of the structure necessitated extra packaging material without adding value to the package. Therefore, the company’s specifications for the new design included the use of a recycled-content material and a 20% reduction in the overall package size.

To address the materials issue, Placon recommended its EcoStar® PC50, a roll stock material comprising a minimum of 50% post-consumer PET up to 100% RPET, made from curbside-collected bottles and thermoforms. Placon operates its own 700,000-sq-ft facility in Fitchburg, WI, that reprocesses up to 120,000 lb of recycled PET per day, turning it into food-grade and non food-grade recycled rigid roll stock for thin-gauge thermoforming.

As Jeff Baillies, Senior Concept Designer for Placon explains, the company also runs up to 15% recycled thermoforms into the blend, “so the Hypertherm containers can be recycled and turned into a new Hypertherm or other plastic packaging container,” he says.

Baillies was lead designer on the Hypertherm package redesign process, taking the project from the concept stage through to final production part approval. To meet Hypertherm’s requirement for a package using 20% less material, Baillies says the first step was to change the location of the clamshell’s hang hole. “The old clamshell design had the hang hole located at flange level on 0.750-inch tabs that extended above the insert card cavity,” he says. “On the new design, the hang hole was moved into the insert card cavity, which allowed the reduction of the 0.750-inch flange to 0.125 inches.

“The side flanges on the old clamshell were 0.250 inches, and on the new are 0.125 inches. Space between cavities was reduced, and cavity placement/arrangement was modified to decrease package size and allow for the new hang-hole location.”

In terms of material thickness, Mahoney says 0.020 mil RPET was chosen “as it provides enough support for the packaging cavities without making the package too rigid that it cannot be opened or closed easily.”

Design reduces pack SKUs
Hypertherm’s Manual T&C division manufactures and packages more than 220 unique consumable part numbers that fall into five different consumable types: electrodes, nozzles, swirl rings, retaining caps, and shields. At the time of the redesign, six different clamshell designs were used to accommodate all of the products. One of Hypertherm’s goals was to reduce the number of package SKUs by consolidating its consumables into a minimum number of cavity shapes and sizes.

To do this, Baillies says Hypertherm first determined how these consumables would be packed and sold (in single- or five-cavity clamshells). They then narrowed down the number of consumables to the smallest and largest in each product family, and provided Placon with physical samples of each. “These allowed us to create a CAD assembly file with the consumables all located on a common center point,” he explains. “From this, we were able to divide the consumables down into four groups based on their physical size and the quantity of each to be sold in a pack. These four groups were used in determining cavity depths and creating cavity shape options.”

With the new design, Placon not only reduced the number of package SKUs from six to four, but it also gave all four clamshells the same footprint—with the exception of the package depth—which allows them to be stacked interchangeably during pack out or at retail. A structural rib placed on the lid of each clamshell SKU further assists in stacking assembled packages.

The new clamshell also provides greater structural integrity through several new design features. At the bottom of all the consumables cavities is a raised platform that provides additional structure to each individual cavity and gives an area of cushion for the products. The area between the cavities at the insert card level has also been lowered to provide a step or additional level of structural support between cavities.

A deterrent to counterfeiting
Hypertherm is made up of 10 different divisions, three of which produce consumables. “It’s a very lucrative business in general,” says Mahoney. “The result is a lot of aftermarket competition, but there is also a lot of counterfeit product that gets put into the field as well.” In contrast to authentic Hypertherm consumables, counterfeit products are often produced with substandard materials and production methods and can lead to a number of equipment problems, including less consistent cutting, shorter life spans, and higher operating costs for the end user. The package redesign provided Hypertherm with an opportunity to incorporate proper sealing into the package.

“When we looked at what counterfeiters were doing with our packaging, we saw they were either opening it up and replacing a genuine part with a counterfeit, using their own packaging but putting our label on the package, or just using their own counterfeit packaging,” says Mahoney. “So we were looking for ways to protect not only the clamshell, but also the blister card that was inserted into the package.”

Coming up with a solution required a balancing act between making the package easy enough for customers in an industrial environment who may be wearing protective gloves to open, while at the same time deterring tampering and providing evidence to the customer if the package had already been opened.

Placon’s solution is a patented snap feature integrated into the lid, borrowed from the Placon ThisBox® (TX) hinged clamshell product line. The snap feature creates the ability to ultrasonically weld the packaging closed around the hang hole so that when the package is opened, a plastic tab adheres the blister card to the front panel of the package. “This makes it very difficult for a counterfeiter to try and reuse the blister card without damaging or ripping it,” Mahoney says.

Currently, Hypertherm’s packaging process for consumables is manual, but as Mahoney explains, the company is looking to automate the process over the course of 2014 to include ultrasonic welding. “In the interim, while we are waiting to do this, one of the other things we did with the new design is to have our Hypertherm ‘H’ embossed into the base of the clamshell, which is different from the package we had before,” she says. “Our previous packaging was very easy to duplicate, and there was no patent protection.”

Pack looks sharper on shelf
As for the goal of an enhanced brand appearance at retail, every component of the package redesign was carefully thought out by Hypertherm’s internal marketing team to ensure synergies in its consumables brand look worldwide. Previously, consumables packaging was generic in design, with circle and oval cavity design features. This resulted in an inconsistent orientation when the product was displayed in the pack on store shelves or peg hooks.

In order to create a consistent merchandising look with the new package, cavities are designed to display the 220+ SKUs in an intentional manner. Through the curvature of each cavity, retailers can determine whether a consumable should face up or down, left or right, ensuring that each package will be lined up in exactly the same fashion as the next.

With the new package shape also came the need to design a new blister card and the opportunity to create new graphics that included color-coding to differentiate consumables. At the top of each card, in the area around the hang hole, Hypertherm added a band of color—there are five in all—to signify the cutting torch with which the consumable should be used.

To enable Hypertherm to package products on-demand, blister cards are preprinted on the back with standard information and warnings, while the front is printed in-house using a Memjet color ink-jet printer running software from Loftware Enterprise Labeling Solutions.

Gradual rollout
The new clamshell made its debut in December 2013, with the launch of a new product, and was then used again for another new product launch in February 2014. As of presstime, existing product had not yet been introduced in the new package, pending the resolution of some logistical issues related to the blister card stock and new printers, Mahoney advised.

Regarding those new packages that have made their way into the market, “initial feedback has been very positive,” says Mahoney. “Our channel partners like that it is stackable, and our order fulfillment department likes that it is compatible with our shipping boxes and inventory management system. As we continue to roll out the packaging and initiate the sealing of the package, we hope to achieve all of the original objectives of the project.” 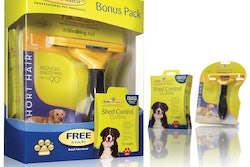 Visibility the key to Bonus Pack 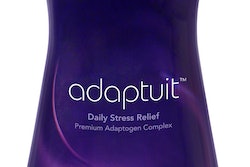