The outer carton boasts a ‘beautiful opaque yellow’ while the inner tray that holds the cell phone protector is made of up to 100% post-consumer recycled PET.

As sales of cell phones and other mobile devices have blossomed in recent years, so too have sales of the protective cases used to keep such devices free from damage. Among the leading suppliers in this product category is Otter Products LLC. Based in Fort Collins, CO, Otter Products recently redesigned the packaging it uses for its OtterBox series of protective cases. Gone is a paperboard solution that tended to get a little shopworn over time and in its place is a two-part PET solution that has brought not only a dramatic improvement in on-shelf merchandising but also an immediate uptick in sales. It’s a classic example of a manufacturer willing to invest significantly in better packaging because it was clear that the payback was there to be had.

“I would say at this point that the new packaging is probably 80% more costly than the two-part paperboard package—folding carton and molded-pulp insert—that we used before,” says packaging engineer Josh Caldecourt. “In my opinion, the packaging used previously was not a good reflection of our brand. I think now we have adjusted that in the right direction and by the right amount. It’s easy enough to justify when you look at the results. We did changeovers at Best Buy and Walmart that amounted to a complete planogram wipe, a fresh new look executed overnight. The data showed a 10% lift in sales almost immediately.”

It should be noted that these are not inexpensive products. The suggested retail price is anywhere from $20 to $100, which means that having to pay another 20 cents or so per package is not as significant as it would be if the product had a price point significantly lower. Even so, this new and improved packaging represents a significant investment. It was a huge decision to move ahead with the change, and Caldecourt and company should be commended for their willingness to invest in packaging the way they did.

In migrating from paperboard to plastic, Caldecourt worked closely with Wynalda Packaging, the maker of the outer carton, and thermoformer Placon, a specialist in rapid prototyping and advanced production tooling that makes the clear inner tray.

The outer carton is offset-printed on a sheet-fed press. “To get that beautiful opaque yellow,” says Caldecourt, “we give it multiple hits of white, then yellow, then black, and finally the series color—a green band for the Defender Series, blue for Commuter, and orange for Reflex. You’ll often see a package like this with reverse printing, but we like the look of surface print and a matte coating that protects it.”

Hot-foil stamping is next, which is followed by die cutting and then a folder/gluer. The hot-foil stamping material, which comes from Crown Roll Leaf, is what gives the finished product a half-inch square holographic anticounterfeiting component on its top flap. Also done during die-cutting is an embossing step that gives a nice 3D tactile quality to the cute little otter floating in a pool of the company’s signature yellow.

Speed to market is crucial

The outer carton comes in three form factors. The Commuter Series and Reflex Series models both fit into one while the Defender model requires Size A or Size B depending on whether or not it includes a belt clip holder. All of the cartons include on the bottom right corner a QR code plus product identification numbers in a yellow rectangle.

“Serving a market as fast-moving as cell phones, speed to market is essential to us,” says Caldecourt. “So we designed this packaging concept with maximum flexibility in mind. For example, that QR and product ID in the yellow rectangle is printed by the carton maker. But if we need to we can also apply a label ourselves to make it product-specific. The net result is that we’ve taken print lead time pretty much out of the equation.”

Placon is equally nimble in making the clear inner trays. These are thermoformed in just three “footprints,” one for each outer carton form factor. But because Otter Products serves a variety of cell phone makers—BlackBerry, Apple, Motorola—the internal geometry of the trays has been formed in more than 100 different varieties in the nine or so months the new package has been in use. “We’ve been able to design, tool, and produce a new internal geometry in as little as four days,” says Caldecourt.

Mold inserts make this fast turnaround possible. Whenever a new product surfaces, Otter Products sends Placon a CAD file detailing the shape of that product and tells them which of the three tray footprints the product belongs in. Using the CAD file, Placon quickly builds a prototype tool. They test it for fit, and once it’s approved it goes to aluminum production tooling so that a mold insert can be made.

“They form the trays from rollstock,” says Caldecourt. “They use a matched-metal trim press as opposed to a steel-rule die, so the tooling actually sheers the trays out of the web and pushes them through in neat, nested stacks. With the steel-rule die the trays are punched out but they still remain in the web and have to be either hand-picked or automatically picked and stacked. This is faster and more efficient.”

Also significant is that Placon makes the trays from its own EcoStar extruded sheet. Produced by Placon from mixed bales of post-consumer PET packaging, EcoStar is up to 100% PCR content. The tooling used to thermoform the trays includes three international resin identification codes that inform consumers that the material is recyclable.

The task of putting the polycarbonate and silicon phone protectors into the PET trays and trays into the cartons is done by hand. This is also when the metal hang tag is inserted into two slots on the carton’s top flap.

The net result is a package that efficiently accommodates a high number of SKUs, fulfills sustainability objectives, and remains undamaged throughout distribution as well as while it’s on display in the retail setting. 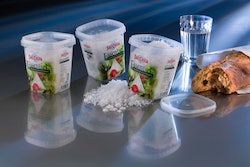 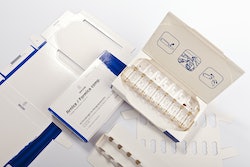 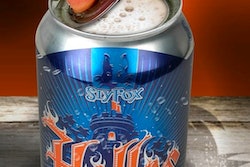 Debut of full-aperture can end for beer