More than 300 Wal-Mart stores in the West are recycling shopping and apparel bags, thanks to a special ‘sandwich’ bale. 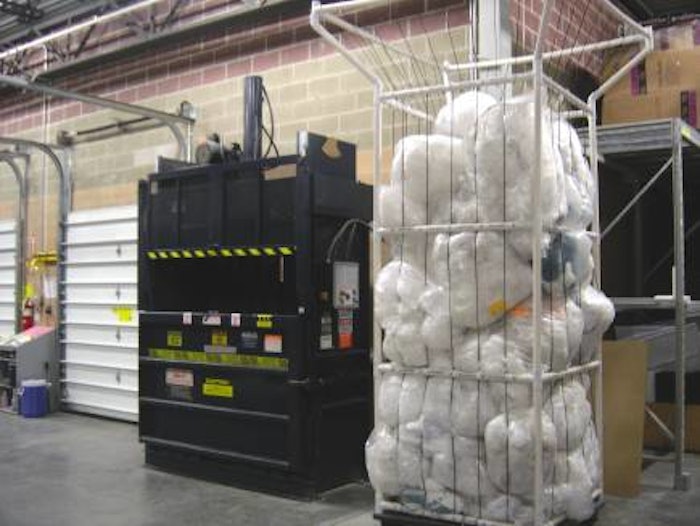 Beach-ball bins have proven to be the perfect place to collect plastic bags in the backroom.

Bales combining corrugated and plastic bags are now being created and ultimately recycled from 326 Wal-Mart stores in eleven Western states. Developed by Rocky Mountain Recycling, the patent-pending process is in a pilot test that began last fall.

In just the second month of the test, the stores generated 448 tons of recovered plastic, says Tara Stewart, a Wal-Mart spokeswoman. Projected out for a year, the total would reach well over 5ꯠ tons.

“It may total even more because the volumes are increasing as our stores become more experienced with making the ‘sandwich’ bales,” Stewart says. Previously, all this material had been directed to landfills as waste, she confirms.

Jeff, the son of proud dad, Arnold Ashby of container distributor Industrial Container & Supply Co. in Salt Lake City, has been involved in recycling for about 15 years, including a stint driving a truck that picked up bales of corrugated from retailers like Wal-Mart. His relationship with the retail behemoth dates back to the early ’90s, he tells Packaging World.

What’s so significant about the beach-ball bin? It’s the way the stores can easily collect plastic bags in their backrooms before the new bales are made. In the end, store employees use the corrugated baler in the store to make the combination sandwich that uses 10” to 12” of corrugated box waste as the base and about the same amount as the top of the sandwich. In between, workers load the plastic bags and activate the baler as many as 15 strokes, each time adding more plastic bags. When the bale is completed, the baler secures it with strapping.

The result is nice, flat corrugated top and bottom with a center of 18” of compressed plastic bags and stretch wrap film. The flat surfaces are important so that bales can be stacked for removal and shipping.

Garment bags were the driver

The impetus for this program wasn’t the Wal-Mart shopping bag, even though that’s at the heart of a school collection program that later became part of the program.

Jeff Ashby reports that friends and neighbors who work at Wal-Mart near his home alerted him to the waste issue for apparel bags and stretch-wrap film. “They told me that virtually every individual garment that comes into the Wal-Mart store is inside its own plastic bag,” he says. “Store employees have to strip off the bags before they can take the merchandise out to the sales floor. Essentially, these bags help to keep the apparel from wrinkling in transit, and it also helps keep the garments clean.”

Eventually, Ashby supplied these people with large garbage bags to collect the apparel bags so that he could learn just how extensive the waste problem was. After two days, he says, the people involved began to complain that they were running out of space in the backroom, and someone asked why couldn’t they put the plastic in the baler to compact all the bags. “That was the genesis of the idea, and we did a lot of work to refine how to do it best,” Ashby points out.

As the sales and marketing manager for Rocky Mountain Recycling, Ashby has long studied the markets for all types of waste, including plastic film. For now, much of the recycled plastic is marketed to companies that manufacture composite lumber, such as Trex and Boise Cascade. “These companies were looking for stretch film from large distribution centers,” he says.

While the Wal-Mart bales contain some stretch-wrap film, primarily linear-low-density polyethylene, the largest percentage of the plastic remains the low-density PE film from the apparel bags. And thanks to a school collection program for shopping bags begun under the aegis of the Wal-Mart Foundation, the bales also contain some high-density PE that’s used to make the tee-shirt shopping bags.

“Boise Cascade loves the mix of plastic that comes out of these stores,” Ashby says. “Apparently, it’s a perfect mix of the three different grades of polyethylene for its process of producing the plastic lumber.” In addition, he adds that at least two major makers of shopping bags are also evaluating the use of the plastic material.

Ashby’s contribution isn’t limited to the concept and finding markets for the plastic. Rocky Mountain Recycling not only picks up the bales, it has to separate the corrugated from the plastic and ship each material to an appropriate customer. “Corrugated paper recyclers don’t want plastic film, and film recyclers don’t want corrugated paper. So we’re in the transportation business, but we or another company also have to separate the materials, re-bale them, and ship them to our customers,” Ashby says. “That way, I can ship a dry van full of 20 tons of plastic to the lumber manufacturers.”

Ashby says that Rocky Mountain Recycling can’t physically serve much more than the Wal-Mart stores in its 11 states, plus the new ones planned for those areas.

“We’re planning to license the technology about how to make the sandwich and perform training to other companies that can handle other areas, with the proviso that our company will market the plastic film for the licensee,” he says. The license will be free so long as RMR is permitted to market the plastic waste.

RMR—and its customers—have been pleased with the cleanliness of the bales. Ashby says that it expected some contamination, even though its training shows workers how to remove any contamination they see. “We expected food wrappers, soft drink cans, and the like,” he says, “but it’s been very clean.”

He attributes that to the use of the beach-ball bin in the backroom of the store. “Because the bin is so open, it’s pretty easy to see any contamination that might be in with the film bags. That’s especially true with the clear apparel bags,” he adds. In fact, he says that Wal-Mart is waiting for more of the beach-ball bins to come in before they try to expand the program to Sam’s Clubs outlets.

“This is another large step forward in Wal-Mart’s total recycling program, and not only helps conserve natural resources but eliminates material from the waste stream, keeps it out of landfills, and provides material for new products,” said Dick Pastor, director of Wal-Mart’s Environmental Management group. “We are constantly looking for ways to improve the amount of material that can be recycled and eliminate as much waste material as possible.”

The retailer was unable to provide any details on how much the new program saves in waste disposal costs.