P&G switches to plastics for Folgers

Calling it a revolutionary new package for coffee, Cincinnati, OH-based Procter & Gamble introduced the AromaSeal high-density polyethylene container as a replacement for the venerable three-piece steel can for the brand’s top-selling 39-oz size. 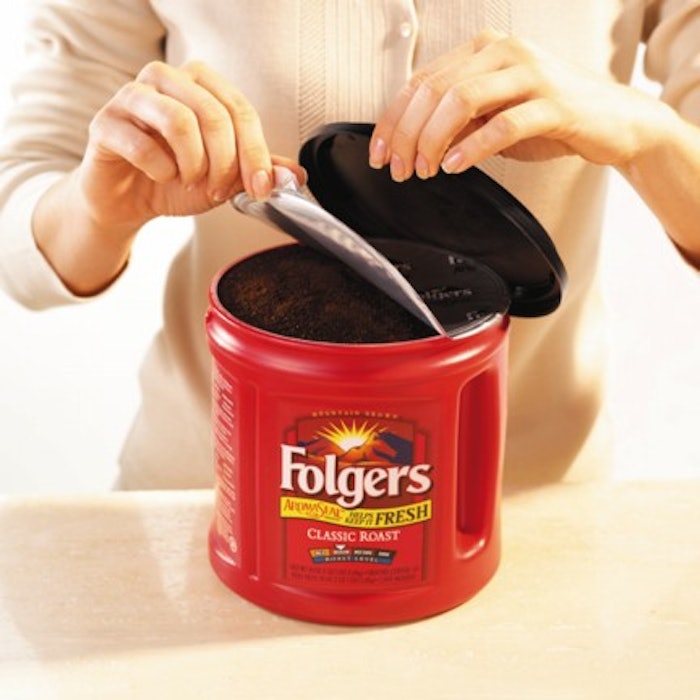 Other Folgers sizes will gradually follow suit, though P&G wouldn’t reveal a timetable for the changes. Launched in August with widespread distribution this month, the bright red container could potentially revolutionize packaging within the coffee category.

Blow-molded by Liquid Container, the patent-pending container is at once striking and practical. While the canister’s overall shape is cylindrical, it’s blow-molded so that it appears to have four separate "panels." The four panels are divided by vertical "grooves" molded into the container. One panel includes an easy-grip handle created by two recessed areas, making the container easy to pick up and carry. Decoration on two other panels includes Folgers’ well-known sun and mountains graphic, and a violator that reads "AromaSeal canister helps keep it fresh." A fourth panel includes a bar code and instructions for coffee makers.

A P&G representative said that decoration is done after blow molding, by heat-transfer technology, from Multi-Color Corp.. Libby Perszyk Kathman was also involved in the package design.

Besides the easy-grip handle, another major benefit of the stackable container touted by P&G is that it does not require a can opener. That eliminates the possibility of sharp edges. Instead, the consumer pulls off the black low-density polyethylene overcap from Erie Plastics that snaps onto the top of the canister. Removing the overcap reveals another interesting aspect of the package: an easy-to-peel-off seal membrane from Amcor.

"What’s unique about the membrane is that it incorporates a one-way valve [seen as two small slits]. As the freshly ground coffee degasses, the valve allows the excess gas to go out, while preventing oxygen from entering," says Gerard Buisson, the P&G packaging leader for the AromaSeal canister. In an exclusive interview with Packaging World, Buisson says the material is a "multilayer adhesive lamination that includes polyester." It also appears to contain foil or a metallized layer. The polyester is reverse-printed-flexo in one color, with a repeating "Folgers AromaSeal" logo. A tab permits consumers to easily remove the membrane.

The packaging materials are said to provide the necessary freshness for the coffee. "Shelf life is not a major concern for consumers because they’re purchasing [coffee] frequently," says company spokesperson Tonia Hyatt. "We did extensive consumer research and found that consumers wanted ease of handling, something without sharp edges, and product that stays fresh day after day after it is opened."

When asked about the economics of the company’s switch to plastic, Buisson says, "we will not discuss costs. The key driver of this project was to meet consumer needs." P&G noted that the steel can weighs 200 grams, 80 grams more than the AromaSeal, so the new canister is lighter to carry and ship.

Containers are filled at the company’s New Orleans, Louisiana plant. "We believe consumers will choose this package over [steel] cans," says Buisson. "We’ll eventually be replacing all our cans with this technology."