Keeper’s feature-packed I-Pack™ secures the tie-down straps, yet permits consumers to interact with the product on store shelves—all without wires.

Rick Lingle
Keeper's custom variation on a blister pack allows consumers to interact with the product's key features, yet protects the tie-d

Keeper Corp.’s new packaging for its tie-down straps is so consumer accessible that the North Windham, CT-based company registered it as the I-Pack™, short for “interactive package.” The I-pack allows consumers to see and feel the pair of straps and even try the ratchet or buckle at the store before purchase.

The package was coordinated by J.R. Reeves Co. (Cheshire, CT). Keeper marketing director Paul Delaney had connected with Reeves Co. at the 2001 National Hardware Show. “Reeves worked with our engineer and the designers and molders and sourced everything, so it was one-stop shopping,” Delaney says.

The package comprises an 80-mil backer “card” injection-molded of gray-pigmented polypropylene by Kinamore (Cheshire, CT). It is molded with hanger holes at the top and twin compartments to hold the strapping. The compartments are partially open on the back to allow limited access to the straps. On the pack front, the straps are protected by a clear blister thermoformed of 24-mil polyvinyl chloride by SouthPack (New Britain, CT). The blister covers the bottom part of the front of the backer to hold the straps. It is secured to the backer by seven pegs matched to corresponding die-cut holes on the blister. SouthPack reports that die-cutting 56 tiny holes at once, done for the 8-up thermoforms, was a bit challenging.

A 21-pt SBS printed card fits into an open frame at the top of the backer and is secured to the backer via two posts on the back and a tab at the top. It is offset-printed in four colors—plus one color on the card back—by Dot Packaging (Batavia, IL).

Debuting in selected stores in December 2002, the I-packs are a more expensive alternative to the rectangular PVC clamshells that Keeper has used for 15 years and will continue to use, according to Delaney. Suggested pricing is from $18 to $24 per pair, depending on the size. The single packaging format was designed to accept 8’, 10,’ or 15’ strap lengths in ratchet or buckle styles. Under development for a year, the I-pack is the second consumer-oriented packaging improvement the company has debuted within the last six months (see packworld/go/c66).

The I-packs will initially be used for four new premium products first at automotive aftermarket stores, then at hardware stores, Delaney says.

The I-pack was developed in response to packs competitors introduced at automotive stores that enabled consumers to manipulate the packaged product.

“That forced us to develop something to stay a step ahead of the competition,” Delaney relates.

Delaney says the I-pack is an improvement over the rectangular clamshell and insert card. One or two straps are packaged loose inside those clamshells, which are stapled shut.

“In the clamshell, we really have to spell out when there are two straps in the package,” says Delaney. “They are loose inside, so it looks like a single mass of strapping.

“The I-pack lays out very clearly that there are two tie-downs in the package. It shows each component, the size and shape of the hook, very clearly. It’s interactive—consumers can maneuver the ratchet, feel the metal, use the ratchet, and make it click. They can feel the strap webbing through an opening in the package back. They can do all this without opening or ruining the integrity of the package. And visually, the packs display well for merchandising.”

Delaney points out that competitive packs use wires to secure their products, whereas Keeper’s is “wireless.” The company decided to stay away from securing its products that way for a very simple reason.

“Wire ties require the use of a knife or scissors to remove it from the plastic backing,” he says. “We didn’t want consumers to have to use a knife anywhere near the webbing.”

The blister cover helps reduce “shopwear,” which is common for the category, Delaney says. “People open the packaging, touch the webbing, and it gets dirty. We hope to eliminate shopwear with this ‘hybrid’ blister pack.”

Feet molded into the backer’s base allow it to stand up on a stable surface, Delaney points out, but it’s not intended to be displayed that way.

Delaney also notes that all of the packaging components, backer, blister, and card, are homegrown—produced in Connecticut. “We didn’t want to deal with engineering through Asian companies. It costs us more to do this way, but we had a fast turnaround.”

Now Delaney and his associates will wait and see if the wireless packs connect with customers. 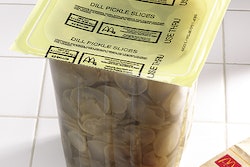 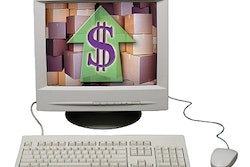 Web Plus: Online purchasing of corrugated to grow 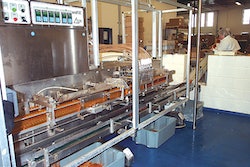