Automation, custom molding and a packaging partnership allow an inventor to bring a hands-free tube applicator to the marketplace. 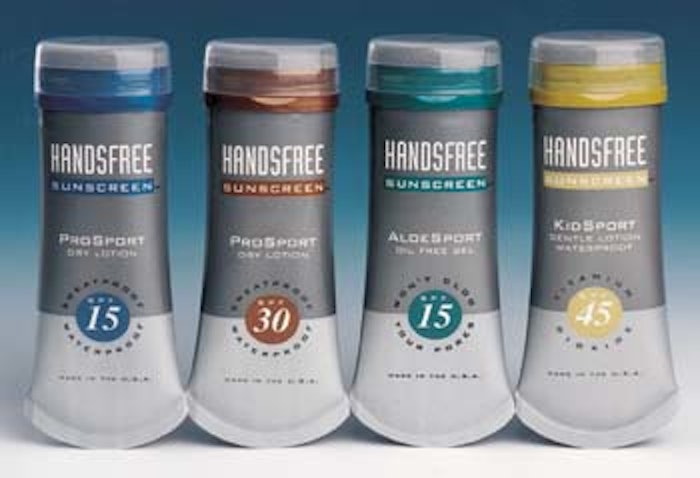 Consumers squeeze sunscreen through a small hole in the foam pad at the end of the tube. The foam's closed-cell design allows co

Bijan Hosseini has had packaging on the brain since he was a child. Having often used a sponge applicator to polish his father’s shoes, Hosseini remembered the feel of the convenient sponge applicator in his hand all the way into adulthood. That image contributed to the invention of a package he designed for the personal care/pharmaceutical industry: a tube with a foam applicator on one end that makes it easier to spread product on the body without messing up the hands. Hosseini is now vice president of HandsFree Applicators, Fountain Valley, CA, a company that markets his tube invention.

The first application for his idea was a tube for HandsFree Sunscreen™. Modern design and striking colors decorate the tube, but the application of the sunscreen is what sets it apart. Product is squeezed through a small hole in the soft foam pad at the end of the tube. The foam doesn’t absorb the sunscreen, rather its closed-cell design allows it to spread the sunscreen on the body. HandsFree recently won the award for most innovative tube at the 1998 Tube of the Year competition from The Tube Council of North America (New York, NY) (see Packaging World, March ’99, p. 2 or packworld. com/go/handsfree).

Supplied by Norden AndBro (Pitman, NJ), the tube’s body is extruded of medium-density polyethylene. Welded to the body is a high-density PE shoulder that cradles the closed-cell foam applicator. The clear injection-molded polypropylene overcap features a half-inch-long pin that fits into the hole in the foam to prevent the sunscreen from coagulating.

Hosseini’s tube could hardly be characterized as an overnight success, however. Until this tube, he had no experience in packaging. In fact, his background was in retailing women’s apparel. But the applicator idea stuck with him, and finally “I decided to put my money where my mouth is,” he says.

It took two years to put that package together. At first, Hosseini built his own custom molds to injection-mold the tube and the shoulder area holding the foam pad at the same time, but that method proved impractical.

“I was going through some hair-pulling experiences and finding out that my manufacturing process was not practical for high-quality, high-volume production,” he says. “I needed to hook up with a company that had the technology and the systems in place.”

Hosseini called a number of vendors hoping to find one that would be willing to manufacture the tube. Finally, in early ’98, Hosseini found Norden AndBro, a subsidiary of Norden, which was receptive to the idea.

Working with Norden, Hosseini was able to put HandsFree Sunscreen on the market a little more than a year ago. Hosseini’s company owns the custom molds, and Norden is producing and assembling the tube parts.

Norden injection-molds the shoulder and overcap. The applicator head is manually assembled by placing the foam from Riley Foam (Philadelphia, PA) inside the oval shoulder, then snapping the overcap onto the shoulder. The assembly is cut to length with both ends open. Afterward, the material is offset-printed in four colors plus a lacquer overcoat. A Norden heading machine then uses internal hot air to weld the shoulder, foam pad and overcap into the tube.

Corrugated cases of tubes are shipped to Norden’s Branchberg, NJ, plant for filling and sealing on a Nordenmatic 850 machine. The machine holds tubes in a cassette, which functions somewhat like a magazine does for carton or case blanks. Tubes descend along an angled chute into a piston filler that completes the task at speeds to 70 tubes/min. Tubes are automatically crimp-sealed and then packed 280 tubes per shipping case. Shippers are sent to HandsFree Applicators in California where orders are manually filled.

Hosseini says HandsFree is most suitable for athletes like tennis players and skiers who don’t want to dirty their hands or take off their gloves to apply sunscreen. “We’ve distributed mostly to specialty golf, fishing and skiing retailers, plus 5ꯠ convenience-store locations,” Hosseini says.

He goes on to say that competing against big sunscreen names like Coppertone® and Banana Boat® is pointless because those brands have market saturation. “It’s difficult to discern the uniqueness of one [sunscreen product] from the other because of all the competition that’s out there,” Hosseini says. “So we’ve made the decision to stay away from that level of competition and go into the marketplace as a specialty product and grow through segments of the retail environment that fit, like golfing and tennis.” The 2-oz tube retails for $4.99 and is available in SPF 15 and SPF 30 versions.

But Hosseini doesn’t plan to stop at sunscreen. In October, the patented HandsFree tube entered the pharmaceutical market holding an analgesic for athletes. “The best ingredient for [the tube] is an analgesic. I’ve always felt that,” he says. The new product is called HandsFree Pain Relief and will be available in the same specialty stores as the sunscreen for $6.99. In addition, HandsFree Shave Gel is available in specialty stores for $3.49. Plus, starting this year, HandsFree Sunscreen will be sold in Argentina, Singapore, Brazil, France and Ireland.

Without Norden’s help, Hosseini says he’d never have been able to realize his dream and get his product off the ground. On his own, he was able to produce the applicator as it exists today, but of inferior quality. “It wasn’t until Norden stepped up with its automated systems and quality controls that we were able to put the package together in a way that we could offer it to the rest of the world.”

See sidebar to this article: Foam's the word