A 1-L clarified polypropylene bottle for Ajax cleaner in Brazil uses 10% less plastic than a version for Europe while doubling its top-load strength.

David Newcorn
The handle adds strength with a profile that tapers in diameter towards the center. Several angles and creases molded into the h

When marketers at Colgate-Palmolive wanted to roll out floral-fragranced versions of liquid Ajax wall and floor cleaner in Latin America, they sought a clear bottle to show off the product's bright colors. Because the product must be poured for use, a handle was considered mandatory for maximum consumer convenience. But based upon local, in-house blow-molding equipment capability, both extrusion-blown polyethylene terephthalate and polyvinyl chloride were ruled out.

That left polypropylene, a resin that CP previously had little experience with from a bottle-molding standpoint (see sidebar, opposite page). "Based upon all of the information we had, polypropylene was our only option, so it was a make-it-work type of scenario," says Sal Del'Re, manager of surface care packaging in the global packaging department at the company's Piscataway, NJ, technical center. CP spent a challenging year developing the technology to deliver a highly clarified, structurally engineered PP bottle. The result is the Ajax Festa das Flores bottle, which first appeared on store shelves in Brazil in May '98 and is being introduced across the rest of Latin America.

This 1-L bottle weighs 58 g and has an average wall thickness of 20 mils. A previous version of the bottle that was made for a European launch a year ago lacks the Brazilian bottle's low weight and high top-load strength, though it has the same clarity.

"Minimizing the amount of plastic used in any plastic bottle while maximizing its strength is extremely challenging," says Del'Re. "We found polypropylene bottles do not have the same handling characteristics as high-density polyethylene or PET bottles; that is, PP bottles tend to be softer, especially in the major panel areas." As a result, bottle makers often compensate by adding additional plastic selectively into the parison. "In our case, we set out to avoid the 'more is better' rule by designing and engineering around the resin's limitations."

What Del'Re refers to are four overall design elements incorporated into the bottle to give it structure: a reinforced label panel, a structurally engineered handle, a specially designed base and what CP refers to as "catenary" shoulders. Using structural engineering principles, the bottle uses 10% less plastic while delivering 60 lb or twice the top-load strength of the European version. Greater top-load strength means reduced damage during distribution. In fact, Del'Re says, finished cases of this product do not require partitions due to the higher performance in load bearing.

Without its special design elements, a PP bottle in that same weight "would feel a lot softer and more fragile," says Alan Nimmey, CP's worldwide director of packaging.

Of course, the idea of designing a plastic bottle so that folds, creases, angles and other features create rigidity and add strength isn't new (see Packaging World, Sept. '98, p. 38, or packworld.com/go/crisco). But what's unique about this bottle is that there are no obvious repeating patterns of ribs, diamonds or braces.

The design starts with the vertical folds or corners at the left and right sides of the container. "They're sharp, maybe sharper than one would typically see in a polypropylene bottle," says Del'Re. "They act as columns to reinforce the front and back panel." A supportive frame surrounds the label panels themselves. "The angles and position of the frame are carefully established to add strength," says Nimmey.

The handle is designed with a diameter that tapers down in size toward its mid-point. "That in itself gives you a significant amount of support in the handle area, which often represents the weak point of a bottle," says Del'Re. Traditionally designed bottles typically maintain the same handle diameter from top to bottom.

Two other areas of the container also are calculated to maximize strength. First is the catenary shoulders. Explains Nimmey: "Mediaeval architecture introduced the use of the buttress design based on the use of a specific arc or curve. That arc is referred to as a catenary curve. We took the engineering principles and created the catenary shoulder in our Festa das Flores one-liter bottle. It's a mathematical form that maximizes the transmission of load along the surface of the material." It's a similar concept to the egg: If it's squeezed the right way in one's hand, it's extremely difficult to break.

Finally, the unique base design--what CP refers to as a tunnel base--consists of a left-to-right, semi-circular channel that bisects a series of similar, front-to-back channels. "Such a design provided for significant light weighting of the base," says Del'Re.

While the design of the bottle achieved a high strength-to-weight ratio, maximum bottle clarity was deemed an essential element to marketing. Colgate determined the three factors that contribute significantly to PP bottle clarity are resin blend, mold design and the molding process.

"We found that there's a balance between clarity and strength. Achieving one can lose the other," says Del'Re. "Working with Milliken we have determined the blend of resin and corresponding processing parameters that will yield the maximum clarity with the maximum strength. They've been terrific partners through this entire development process," he adds.

A final ingredient in the resin is a small amount of ethylene monomer, which enhances drop-impact strength. (Using ethylene monomer allows the insertion of ethylene molecules into the growing PP chain during polymerization). The polypropylene copolymer and clarifier are then compounded and pelletized into a single molding resin by OPP Petroquimica for delivery to CP's in-house blow-molding operation.

CP makes the Brazilian bottles on shuttle-style equipment from Bekum (Williamston, MI). "We're heavily vertically integrated in making plastic bottles," says Del'Re, estimating that CP makes half of its own bottles in this region.

Colgate-Palmolive wouldn't disclose cavitation or cycle times, except to acknowledge they're continuing to improve as the learning curve progresses. "We will not compromise bottle quality for cycle time," says Del'Re. "Cycle time will improve as we learn how to run this process."

The mold was designed by Uniloy-Milacron (Manchester, MI), formerly part of Johnson Controls' mold-making and blow-molding business before it was purchased by Milacron. The mold design represented a significant contribution to the successful development.

"You can't just extrude polypropylene into a mold designed for high-density polyethylene," says Bob Readdy, Colgate's senior technical associate specializing in blow molding. Part of the issue is surface finish. Polishing the mold's interior is a critical factor in the production of a clear bottle, but "when you extrude polypropylene into a highly polished mold, air entrapment is likely to occur between the plastic and the mold surface."

One solution turned out to be a partial sand-blasting in certain critical areas of the mold, allowing trapped air to escape.

Another consideration in mold design was to utilize three separate cooling zones. One cooling zone for the entire bottle wasn't sufficient. "Cooling the body too fast results in clarity being compromised," says Del'Re. "For effective machining and cycle time, the neck finish and tail flash areas need to cool quickly," the latter to facilitate flash removal.

"The mold design went through six generations before we achieved our clarity, strength and quality goals," Del'Re says. Uniloy-Milacron "has done an outstanding job on this portion of the development."

The design of the parison tooling also had to be addressed. "The die for polypropylene should be highly polished and have a longer land," says Readdy. The "land" of the die that Readdy refers to is the straight section of the die just before the plastic exits the die. CP found that the ratio of the die land to the die gap for PP should be 10:1 versus 5:1 with HDPE. "In addition, the die head needs to be streamlined to minimize disrupting the polymer flow," adds Readdy.

The length of the extruder screw was also increased to allow the material plenty of time to melt. "Longer residence time in the extruder improves melt quality and resulting bottle clarity," says Readdy. A length-to-diameter ratio of 24:1 minimum is recommended for processing clarified PP, according to Readdy.

Another change compared to HDPE was the addition of a prepinch hot knife. This device provides for the efficient cutting of the PP parison. By trapping the parison air, the hot knife also prevents the parison from collapsing onto itself.

Summarizing CP's move to PP for the Ajax container, Del'Re admits, "It has been and continues to be a learning experience. It took us about a year to get to this point. But the presentation as it looks today is really crisp and it evokes the Ajax heritage on the shelf." 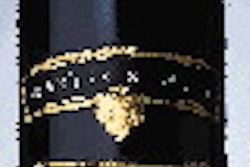 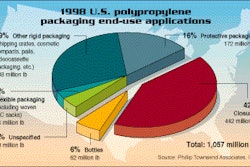 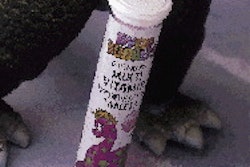 How to protect an effervescent tablet 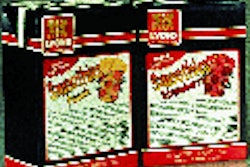