All fit for shipping

During peak production periods, thousands of pieces of exercise equipment, weight benches and home gym systems are produced daily at the three plants of St. Jerome, Quebec, Canada-based Allfitness Co. They leave this high-volume manufacturer headed for stores all over the U.S, including major retailers such as Montgomery Ward and Sears. They also export to England, France, Italy and Mexico. With merchandise traveling such vast distances, shipping quality becomes as important as the merchandise itself. Allfitness had been using a cohesive kraft paper to wrap its products for shipping, but found that the paper was not doing the job well enough. "Paper offered us very little protection," says quality control director Terry Cobb. "It simply didn't have the cushioning properties to protect parts from coming together with force during transit." Not to mention tearing and puncture problems, which left products exposed to further scratching. In addition, he says, "Products may sit for several months in non-climate controlled warehouses, where packaging caused humidity problems as a result of the glue on the cohesive paper becoming gummy and discoloring the products." Just over a year ago, Allfitness switched to Polyair's (Chicago, IL) Cohesive Air-Foam(TM), a blend of polyethylene resins formed into sheets that protect highly polished or fragile surfaces during transit. It consists of 1-mil linear low-density polyethylene coated with a cold-seal adhesive, which is then laminated to 1/16" of low-density polyethylene foam. "We went to several vendors of this type of product," says Cobb. "We brought in samples, did tests and came up with Poly-Air. The foam sheets give us the best results at the most economical price." Air-Foam is nonabrasive, yet has a high coefficient of friction. It's also lightweight, waterproof and offers good thermal insulation. Allfitness put foam samples through rigorous testing designed to simulate stressful shipping environments. Two standards were applied, for both North American and European shipping conditions. "In Europe, there are no loading docks like here in North America, so the European tests were much harder," Cobb explains. "The drop test height was three times that of the North American test, which assumed direct placement from loading dock to truck," he says. From varying heights, packages were test-dropped onto every edge and surface, then inspected for damage. These were performed repeatedly, with Air-Foam and other brands of protective packaging. A humidity test was also performed. "After the humidity test, some of the packaging products left an unpleasant, sticky residue on the wrapped parts," says Cobb. "Of all the products tested, Cohesive Air-Foam was the most economical, and was the only one that passed all our tests." "Cohesive air foam has answered several issues," he continues. "It maintains the painted finishes of our products, allowing them to arrive in excellent condition." The new packaging has solved the humidity issue, as well. "It sticks to itself and nothing else," says Cobb. "It doesn't leave any residue on the product. "Also, there's a big difference in the perception by the customer. Compared to the dull brown paper we previously used, the bright white Air-Foam provides a neat, clean appearance when the carton is opened, lending a considerable amount of perceived quality. And our workers feel much more comfortable with the foam than with paper, which caused paper cuts." Cohesive Air-Foam arrives at Allfitness in precut 8" and 10" strips. "It comes in a roll," says Cobb, "and we install it on our production line near the packing benches. Our operators unroll and trim it as they need it." The number of sheets that are torn off the roll is determined by part sizes. Parts are hand-wrapped and carefully placed in designated spots inside a shipping carton. A lid is placed on top, the box secured with straps, then placed on a pallet, shrink-wrapped and loaded into a truck for shipment. "The foam does cost more," Cobb admits. "The cost difference between paper and resin-based foam is substantial. But if we go back and look at market research on the return rates of product due to damage in shipping and handling, the benefits equal out--and might turn in our favor. "Staying a step ahead of the competition is what Polyair allows us to do," he concludes. "We can concentrate on making quality goods, since the foam protects both our quality image and our products." 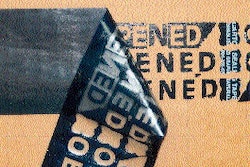 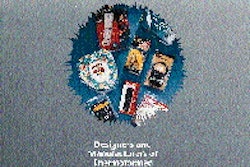 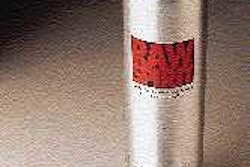 Aluminum "bottle" a first for vodka