Innovia Films launches Propafilm RCU—its first BOPP film that has been officially proven to provide up to 1.5 years of protection from mineral oil migration. 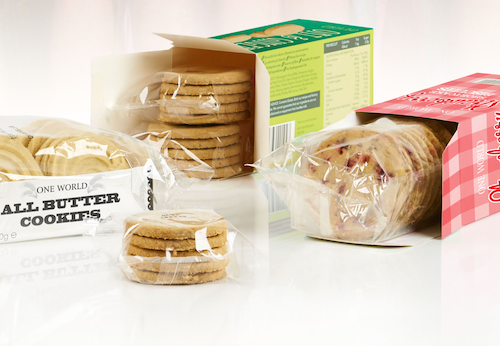 Innovia Films has launched its first BOPP film that has been officially proven to provide up to 1.5 years protection from mineral oil migration – Propafilm RCU. Its development has been the result of proactive investigation into the mineral oil hydrocarbon (MOH) and mineral oil aromatic hydrocarbon (MOAH) barrier protection of their films. It included the evaluation of films with multiple laydowns, increased coat weights and one-side/two side variations.

This work commenced after earlier studies by Dr. Koni Grob, from the official Food Control Authority of the Canton of Zurich, Switzerland identified that foods were being contaminated by migration of mineral oil from paperboard packaging. Further studies by the UK Food Standards Agency highlighted that safe levels were frequently exceeded in food packaging samples that were tested.

Traces of mineral oil residues in food are thought to arise due to their migration from the printing inks present both on the packaging surface and in recycled newspapers, used in the production of cardboard packaging. Most commonly used newspaper inks contain mineral oils. These cannot be removed sufficiently during the recycling process and are thus able to enter cardboard food packaging. Even at room temperature these residues can migrate and be deposited on dried foods packaged in the box, such as pasta, rice, breakfast cereals and biscuits. MOAH are suspected of being carcinogens, according to the World Health Organization’s Joint Expert Committee on Food Additives (JECFA), and the UN’s Food and Agriculture Organization (FAO).

The film, besides offering excellent barrier, has superior optical properties, a low sealing threshold and a broader sealing range which makes it ideal for use in a variety of markets (biscuits, bakery, confectionery, dried foods, tea and cereals).

Andy Sweetman, Marketing Manager Packaging & Sustainability for Innovia Films, says: “It is exciting to be able to offer the market a cost effective versatile film that ensures proven protection for dried foods. It is printable and can be used on a range of machines, including vertical and horizontal form-fill-seal (VFFS/HFFS). Propafilm RCU is ideal for pre-made bags and lamination to other films. This BOPP film offers the market a complimentary alternative to our NatureFlex film that provides up to five years protection. It means we have a product to meet a wide range of shelf life requirements.”

Ease of Use, Recyclability Push Growth of Flexible Plastic and PET Bottles in Western Europe

In 2018, food packaging accounted for a 55% share of the market in the region, followed by 37% for beverage packaging. Both the food and beverage categories saw the demand for smaller, lighter, and easy to store and handle pack sizes.
Kim Overstreet
Dec 16th, 2019

Italian pasta maker Girolomoni has launched its organic Graziella Ra ancient wheat spaghetti, farfalle, and penne rigate in what is described as a fully recyclable paper stand-up bag with a window that allows consumers to clearly see the product inside.
Pat Reynolds
Nov 15th, 2019

Paulig, based in Helsinki, Finland, and owner of the Santa Maria brand, actively strives to reduce its environmental impact and has worked for some time now to develop packaging that protects product while minimizing environmental impact.
Pat Reynolds
Nov 7th, 2019

Confronted with questions around sustainability, the flexible packaging industry is working to make recyclable pouches a reality in support of a more circular economy, using the How2Recycle label.
Matt Reynolds, Editor
Nov 1st, 2019

For its roasted popcorn snacks, Berlin-based Wildcorn uses a multilayer high-barrier PP laminated film that is recyclable in countries having the recycling infrastructure to accept the material.
Innovia Films
Oct 31st, 2019

In analyzing the sustainability of the new inverted squeeze pouch for its BBQ sauce, Uncle Dougie’s is surprised to learn of its environmental impact versus glass jars.
Anne Marie Mohan
Oct 21st, 2019

Like other suppliers of packaging materials exhibiting at PACK EXPO Las Vegas, Scholle has identified a movement in the spouted pouch market from aluminum foil-based laminations to transparent laminations and, ideally, to a transparent and recyclable option.
Pat Reynolds
Sep 24th, 2019

A PACK EXPO highlight in the Upper South hall of Amcor was a package of English muffins from Dave’s Killer Bread, a firm based in Milwaukie, OR.
Pat Reynolds
Sep 23rd, 2019

Flexible package for new nut butter-covered nuts from Justin’s is one of the first commercial pouches to use such a high proportion of PCR plastic.
Anne Marie Mohan
Aug 5th, 2019

Boulder, CO-based Skratch Labs, the maker of clean and simple sports nutrition products for endurance athletes, is breaking away from its traditional packaging with a special edition packaging design to show support for the EF Pro Cycling team competing in the Tour de France.
Pat Reynolds
Jul 22nd, 2019

First use of Ecolean in Mexico

Mexico City-based Alpura, a leading dairy producer in Mexico, is the first in that country to commercialize an innovative stand-up pouch that has become quite popular around the world.
Pat Reynolds
Jun 26th, 2019

Thinsters are truckin’ this summer with the Grateful Dead