A zipper reclosable pouch is now making its debut for pasteurized blue crabmeat in a 16-oz pouch sold under refrigeration. 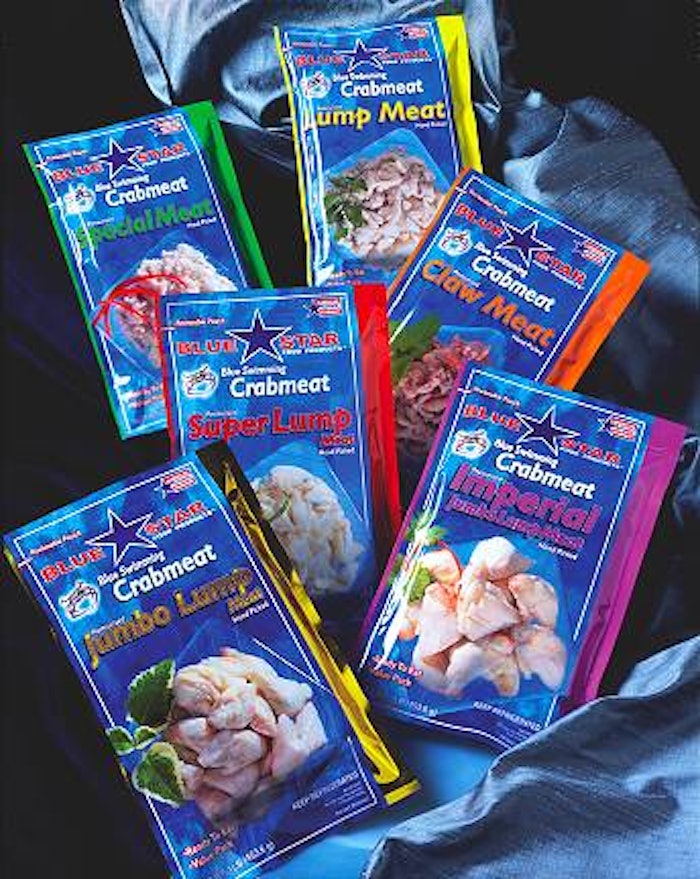 The Zip'n Store pouch was co-developed by Pyramid Flexible Packaging and by Presto Products, maker of the polypropylene Fresh-Lock zipper for retort applications. The package is now being introduced in six varieties in the United States by Blue Star Food Products, Miami.

Unlike tuna packers, Blue Star has developed its own pasteurizing process that uses lower temperatures and less time in the retort to create a much fresher-tasting product, says Steve Harmell, vp of marketing and sales for Blue Star. Since the product isn't fully sterilized, the package is completely handled under refrigeration. "In the crabmeat business, people want a fresh taste, and this is as close as anyone can get to fresh and still have shelf life," Harmell says.

Produced at Pyramid's Korean converting plant, the pouch comprises polyester/foil/nylon/cast polypropylene in a thickness of 5.75 mils, says Darryl Shimada of Pyramid. The polyester is reverse-printed with a 175-line screen in eight colors by gravure. The graphics were largely developed by Pyramid, using product photography supplied by Blue Star. The crabmeat is packed in both Vietnam and in Indonesia, with production expected soon in Thailand, Harmell reports. All the plants have had experience packing crabmeat for Blue Star in cans and plastic cups. Currently, the packages have a 12-month shelf life, but the company is now experimenting with techniques that could extend it to 18 months.

About a year ago, Blue Star began marketing crabmeat in a 6-oz retail pouch that was also supplied by Pyramid, without the zipper. The new 16-oz pouch will be the first time the retortable zipper has been incorporated into a nationally distributed product in North America, points out Shimada. Distribution, says Harmell, will begin with tests of air shipments to six of Blue Star's major distributors for foodservice accounts. He adds that Costco, a warehouse club operator, will test the new products in a couple of its warehouses to gauge consumer interest.

Selling prices for the blue crabmeat vary widely, Harmell says, from $3.99/lb in the 6-oz size, up to $19.95/lb for its high-end varieties. In fact, the top grades, Imperial and Jumbo, are first packed into a plastic sleeve for added protection before the sleeve is loaded into the pouch.

"We presented the pouch at a recent seafood show in Boston, and we had a tremendous level of interest," Harmell says. "We already have one restaurant chain who wants to test the large pouch." However, he adds that the 6-oz size also has appeal to restaurants. "A couple of national chains fell in love with that pouch, so we're shipping some to foodservice distributors as a portion size." He adds that, while the foodservice industry standard package is a can, some restaurants are promoting themselves as having "can-free kitchens," so the pouches, small and large, will appeal to them.