Both 12-oz Butter Toffee and 10-oz Low Fat Butterscotch flavors debuted in October. They retail for $2.99 at approximately 800 Target stores nationwide. Both products, which are contract packaged, come in the same 81/4" W x 11" H premade pouch, sourced through Osio Intl. (West Covina, CA). From the outside in, the 4-mil structure includes a 48-ga polyester/adhesive/48-ga metallized polyester/extrudate/proprietary polyethylene sealant. An Osio representative tells Packaging World that the extrusion used to join the sealant layer to the rest of the structure is especially heavy, lending the pouch ample puncture resistance and stiffness. Anticipated shelf life is at least six months. Eight-color graphics are reverse printed via gravure. The Orville Redenbacher brand, owned by Fullerton, CA-based Hunt-Wesson, has long been recognized as a leader in the microwave popcorn category. According to Jim Withrow, the company's director of sales and marketing for nongrocery, "Entering the ready-to-eat category was a venture onto new ground that called for innovative packaging, and this reclosable zippered pouch is one of the keys to selling the brand." The zipper material comes from MiniGrip/Zip-Pak (Manteno, IL). "It's not an inexpensive package," Withrow admits, "but the response to the product has been excellent. When we presented it to Target, they liked the concept so much that they placed it in their stores nationwide." He explains that club stores and supermarkets will likely be the next retail channels to receive the product, though he declined to provide a timetable. Another new package sporting a zipper reclosure is the crunchkeeper(TM) snack food bag from Plano, TX-based Frito-Lay. Spotted by PW recently in Cedar Rapids, IA, were Super Size(TM) versions of three popular brands: Doritos in a 24-oz size that sells for $4.99 and Ruffles® and Lay's® at 181/2 oz for $3.79. Next to the top zipper and its printed three-step usage instructions, a large zipper graphic accommodates the Super Size tagline on the front panel. The pack's resealability is also promoted on the back panel, with verbiage such as "keeps the crunch(TM)" and "Frito-Lay has developed a new resealable bag to keep your favorite snacks fresh tasting longer." At press time, neither packaging specs nor details on crunchkeepers' availability had been disclosed to PW. 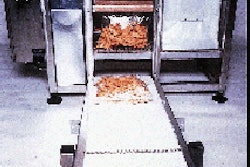 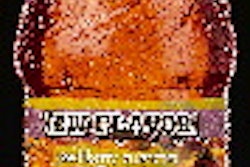