"We wanted to make sure that if this package was the only communication a consumer got, the product just might sell itself." So says product manager Mark Younce of Jerome Foods in describing what the Barron, WI-based turkey processor wanted from the packaging it designed for a lien extention of The Turkey Store® products. 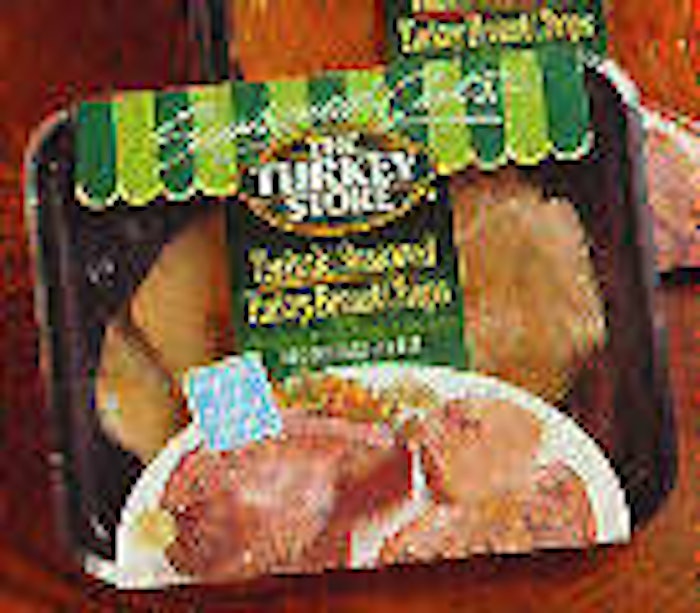 The paperboard sleeve accomplishes its communications mission on the strength of a prominent photo of the cooked product. In case consumers aren't familiar with turkey cuts, the tantalizing photo tells them what they're missing if they pass the package by. Printer off-set in six colors plus aqueous coating by Green Bay Packaging (Green Bay, WI), the sleeve is a 16-pt recycled clay-coated newsback. Like the original items available in The Turkey Store line since 1985, the meats in the new Seasoned Cuts(tm) line are in modified atmosphere packages that deliver a 21-day shelf life under refrigeration. A custom thermoformed tray of black polystyrene highlights the seasoned products, Younce doesn't say who provides the tray. As for the clear film shrinkwrapped over the tray, it's described as a BDS material from Cryovac (Duncan, SC). Inside, a black soaker pad from Sealed Air (Danbury, CT) collets excess moisture from the meat. Introduced last August, Seasoned Cuts are scheduled for national distribution by the middle of 1995. They retail for about $5.99/lb, or $4.80 for one package.