In South Africa, Tiger Brands has taken what it believes is a giant green leap by converting all its bread packaging to ‘degrade-to-water’ biodegradable film.

It’s probably safe to assume that every leading consumer packaged foods manufacturer in South Africa is evaluating its options to act and look ‘greener’ when it comes to packaging. Trumping the market, though, is the biggest player, Tiger Brands, which has just completed a massive and complex project to convert it biggest brand by value, Albany bread, to biodegradable bags. The ground-breaking new packaging hit local supermarket shelves in early April. “This represents a notable and exciting development for Tiger Brands, and it is the realisation of our corporate commitment to sustainability and reducing our environmental footprint,” comments Meghan Draddy, packaging development manager cereals, milling & baking. “It’s a wonderful opportunity for Tiger to boost and add value to the Albany brand—and to give back something at the same time.”

Draddy stresses, too, that Tiger is absorbing the nominal extra cost as part of its social responsibility efforts. “We simply have to do our bit—and considering we use some 500 million bags a year, the amount of plastic our product is sending to landfill is enormous. We recognised that we have to take ownership of and solve this problem. Recycling such flimsy film is not viable from a collection aspect, and so converting to biodegradable packaging is the optimal answer.”

Albany has by far the biggest share of the country’s national bread market, with 12 major bread plants producing the Albany Superior, Olde Cape, D’light, and Everyday ranges. Not surprisingly, Albany bread is the Tiger group’s biggest user of packaging.

A pioneering project of this magnitude involved months of discussion, planning, development, and degradation trials, and it has taken more than a year since its mooting to become a reality. For Draddy and the Albany marketing team, the first box to tick was to determine whether, in fact, this move would be valued by consumers.

Tiger Brands has for many years used immersion market research techniques where subjects are minutely observed and interviewed in their work or home environments to explore the issues that surround and contribute to a brand’s performance.

“From this we ascertained that environmental issues are a concern for people across all socioeconomic groups—contrary to common perception, or misconception, they are by no means only in the mindset of affluent or highly-educated consumers,” Draddy notes. “With bread a universal staple in this country, we’re confident that this development will be warmly received by all consumers.”

The next stage of the project was to work with long-standing packaging partners to find the right biodegradable solution. After much research into the many varied technologies that are available, it was decided to link with Symphony Environmental (www.degradable.net), whose d2w or “degrade to water” additive that creates oxo-biodegradable plastic comes with a proven, globally-recognised track record (see sidebar on p. 64).

Draddy has high praise for the support and input of Albany’s three flexible packaging suppliers in coming to this green party—Tropic Plastic & Packaging (011/27.31.4681534), East Rand Plastics, a member of the Astrapak group (www.astrapack.co.za), and Nampak Flexible (www.nampak.co.za).

“We have been manufacturing biodegradable refuse bags with success over the past four years—and we are delighted to take this know-how and support Tiger Brands in this project,” he notes. “Bread branding, much assisted by better printing options for packaging, has evolved fairly dramatically in recent years, and this step by Albany is a positive development for Tiger, for ourselves, and for the public at large.”

He adds that many consumer packaged goods companies are investigating ‘greener’ options for their packaging, but many are put off by the added cost. “Perhaps with Albany now taking the lead, more will follow,” he says. “It really is the ethical way to go, and the environmental pressures are not going away.”

Tropic Plastic & Packaging is the country’s leading manufacturer of wicketed bread bags and principal supplier to Albany. The company has a deserved reputation as a specialist and innovator in this arena and was the first to introduce the mitred bag that, with a 45 degree cut at bottom of bags, presents a neater and tighter finished pack.
“We’ve made it our mission to keep ahead in the bread industry; we have much technical and operational expertise and have installed the very best wicketing machinery,” comments Mohamed Timol, Tropic’s operations director.

The wicketers, he notes, come from Hudson-Sharp (www.hudsonsharp.com). “This Albany initiative is extremely exciting, and we’re proud to be key partners with Tiger in making it happen.”

Tropic has developed two technically-advanced films that are being used for Albany’s breads and which are now extruded with the d2w additive: Tropithene, an opaque film which has a luxurious texture and finish and which is used exclusively by Tiger to differentiate Albany’s Olde Cape range of breads; and Tropistar, which, for PE film, has particularly glass-clear properties and is thus ideal for bread bags. In fact, Draddy points out that an initial teething problem revolved around clarity of the d2w bags, a challenge which she credits Tropic’s Mo Timol and Symphony’s George Fee in resolving.

Nampak Flexibles, another in this project triumvirate, took a major and measured move into the bread market in 2004. According to Robin Moore, managing director of the division, it has invested over R22-million ($2.8 million) in technology, including seven Hudson-Sharp wicketers and a Carint (www.carint.com) CI eight-colour press, all installed at its Meadowbrook, Johannesburg, factory.

“Apart from an impressive fleet of machinery, we also brought in all-important human skills to ensure the quality of our extrusion process and bag-making. This growing arm of our business—we now have 30% market share—is also nurtured by a dedicated sales and support network,” Moore says.

On the Albany project specifically, he believes this initiative is both timely and admirable: “Albany is our biggest customer and it has been a great project to work on—all parties in the packaging supply chain must face up to the environmental challenges. Hat’s off to Albany for taking the lead.”

An important aspect of d2w’s application is that the degradation process can be controlled via the use of inhibitors. It was an imperative for Albany, Draddy stresses, that the bags had good storage characteristics. “We undertook numerous trials,” she notes, “especially to prove that the bags would last unblemished in storage. Understandably, for reasons of economy we order in significant quantities and usually have several months’ worth of packaging to hand at our plants. We can’t allow any degradation in store.”

After lengthy testing, the bags passed muster on all parameters with no compatibility or tainting issues, maintaining both their integrity and tensile strength. “We estimate an overall cradle-to-grave life-span of two years. In ideal weathering conditions, such as exposure to UV light and rain, the bags would last for a year, but we gauge they will degrade in 12 to 18 months in landfill,” says Draddy.

Albany intends making an appropriate noise about its good work and is rolling out a comprehensive marketing campaign that involves an environmental programme through schools and extensive PR.

Ultimately, concludes Draddy, the project has given rise to a wealth of new knowledge within Tiger: “We will endeavour to pass on all we’ve learnt to other brands within the group. It has been an amazing and enlightening exercise.”

Editors note: This story is reprinted with permission from Packaging & Print Media. 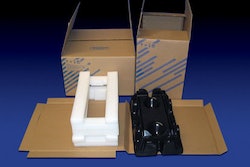 Measurable success on the sustainability front 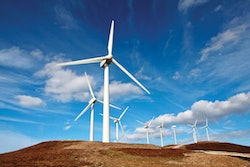 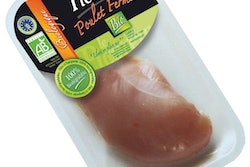 Tray puts PLA on the MAP