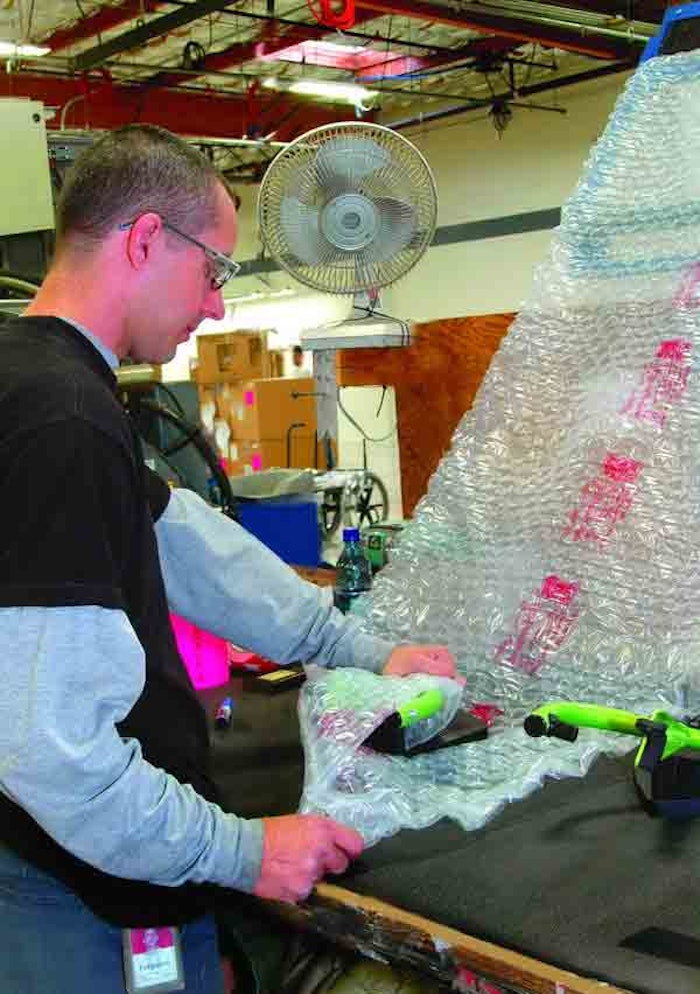 When a customer invests in a wheelchair, he or she wants it to be in pristine condition. So when some customers complained about nicks, scratches or dents on these medical devices, , CO-based manufacturer Sunrise Medical sought a cure.

The occasional damage during shipping was attributable to the kraft paper Sunrise Medical had used to wrap metal wheelchair components such as arm rests or leg rests. “During shipment, they were rubbing against one another through the paper and that led to scratches or dents. We were getting some customer complaints,” explains Kevin Davis, senior packaging engineer for the maker of homecare and extended-care products.

The packager first began using a Pak’R system at its 240,000 sq’ facility in , in November 2005. It now employs six of the systems. The 20”-wide x 18”-high machine is mounted to a stand for dispensing, allowing packers to quickly pull and tear off the amount of air cushions needed.

“We served as a beta-test site for the new Pillow Pak’R system,” says . “We provided feedback and the machine was a huge success as the wrap helped alleviate the nicks and damages, and the air cushions were easier and faster to use” than was the previous paper wrapping material.

“What is unique about this system,” he says, “is that it produces a 24-inch-wide web. For us, that size was imperative because the leg rests that we use are fairly long compared with the 16- or 18-inch web width of some competitive products. So this material solved that issue for us.”

Sunrise Medical has four manufacturing sites and one in . Pre-fabrication of components is done in . Assembly of wheelchairs is done at the facility, where the chairs are wrapped and shipped, primarily to distributors.

Although Sunrise Medical makes what calls “commodity-type wheelchairs you might see in a hospital, the majority of our chairs are customized,” he notes. “The doctor takes the measurements of the patient, and then sends that information to us.” says these chairs can be highly specialized, such as the one used by the late actor Christopher Reeve. The customized wheelchairs are also sold as Quickie-brand devices.

The Pillow Pak’R, says , “is a stand-alone unit that serves as an on-demand wrapping system. We are very tight on space so these work nicely.” runs the Pillow Pak’R machines on one eight-hour shift, five days/week, where they protect shipments of hundreds of wheelchairs each day. The machines are stationed at different areas within the facility.

“We have two Pak’R units in our parts area that has two independent lines,” says . “Since almost all parts going out are subject to scratches or dents, each part needs to be wrapped, which keeps each machine busy. There is another machine for our ‘power’ chairs located in a separate area, and there is one machine in each of our three ‘manual’ chair packaging lines.”

Although the units can be moved within the plant, they are not on wheels. “It would not be efficient due to our [plant] layout to share machines,” adds.

In use, an operator loads a roll of the 1.2-mil low-density polyethylene film onto the Pak’R. FP Intl. extrudes the film, printing its name on the web in red. The supplier says there are 11 bubbles across the 24”-wide web.

A sensor on the stand is set to either a 6’ or 8’ length of film. No foot pedal is used to dispense the film. After the Pak’R inflates the material an operator tears it off the web at the perforation. The cushioning is wrapped around the arm or leg rest and the worker uses tape to adhere the end of the cushioning to the material.

Commodity-type chairs are typically folded down and packed into boxes for shipment by United Parcel Service. For motor-powered customized chairs, workers strap the chair to the pallet beneath it. Arm or leg rests are wrapped in the air cushioning. A 49”-high corrugated “tube” is positioned over the load and slides down over the pallet. Corrugated corner posts and a top cap provide added stability. These materials are supplied by Unisource, and manufactured by Western Corrugated Design (562/695-9295).

Asked about the economic comparison between the new bubble-type cushioning vs the previous kraft paper, explains: “Ours is a small market and the competition is fierce. It comes down to customer perception and satisfaction. We want our product to arrive without any damage and without our distributors having to do any touch-up work, and now there are no more nicks or scratches.”

How have customers responded? “We’ve received some good feedback, both from the and international customers,” says . “ is an area that is stringent on what it accepts and the quality levels. After making these changes, we received some good feedback from them saying that the parts were arriving in great condition and there was a noticeable decrease in scratches upon receipt.”

The success of the cushioning system, says, has Sunrise Medical considering them in its other facilities as well. “All in all, we’re pleased with the Pillow Pak’R system and service,” he says. “It takes us the same amount of time to pack the chairs as when we were using paper, only now we’re protecting the items from damage. Changing from paper wrapping to this air cushion packaging has made us as happy as our customers.”