Sugar is the latest product to turn to a handled high-density polyethylene container. 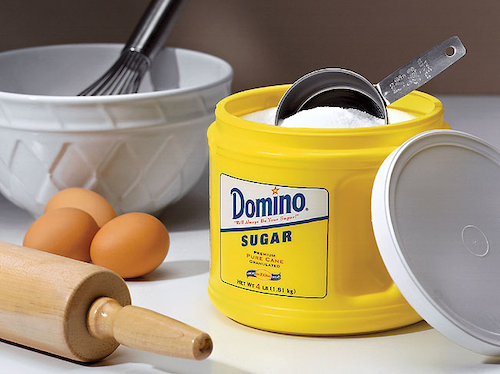 Introduced in six test markets beginning in February, Domino Sugar in a 4-lb canister represents “a first in the sugar industry,” according to Yonkers, NY-based Domino Foods, Inc.

What makes the canister so unusual in this instance is that sugar “is a large-volume, low-profit commodity item,” notes Kevin McElvaney, the company’s marketing manager. Consumer pressure led Domino to the canister as an alternative—not replacement—for its 4- and 5-lb bags.

“It’s quite a drastic packaging change for sugar,” he admits, “but consumers have been asking us for years why can’t we do something about the packaging for sugar. I would get e-mails and phone calls saying we can put men on the moon, but you sugar manufacturers can’t find a better way to package sugar.”

Domino considered lay-flat and stand-up zippered pouches, and gable-top cartons as alternatives to paper bags, “but they can’t be stacked three-, four- or five-high like bags or boxes, which fit like puzzle pieces on the shelf and fill all the space from bottom to top with no wasted air. These other alternatives end up on a second, third, or fourth shelf,” McElvaney says, forcing retailers to have to restock them frequently, adding labor costs.

Pretium Packaging blow-molds HDPE into a yellow, handled container. “It mimics the look of our paper bag and uses Domino’s yellow color,” says McElvaney. Graphics come from Di-Na-Cal Label’s heat-transfer labels. A low-density polyethylene overcap from Berry Plastics snaps on the canister to top the package.

Beneath the overcap, a clear film is heat-sealed to the mouth of the canister for tamper evidence. The words “Domino Sugar” and “Do not use if seal is broken” are random printed on the film. Once the product is gone, the canister can be reused for storage.

While Domino Foods fills bags at its own facilities, the test-market containers are outsourced. McElvaney affirms that capital outlays for packaging lines to accommodate the canister would have to be justified by strong sales.

The 4-lb canister is available in St. Louis, Milwaukee, Chicago, Atlanta, Baltimore, and Roanoke, VA. “It will remain available until we evaluate where we want to extend it,” says McElvaney.

“So far it’s doing very well in the marketplace,” he adds. “The problem we have now is too many out-of-stock situations. Wal-Mart has done a bang-up job with it in the test markets, and they can’t keep it on the shelf.”

McElvaney admits the canister is expensive, estimating that it costs about 10 times that of the paper bag. That plays a role in how Domino markets and prices the new package. In the Northeastern United States, for example, where the company sells 5-lb bags, “the consumer gives up a pound of sugar for a value-added package,” he says. In that market, the canister sells for $2.29 to $2.69, the same range as the 5-lb bags.

In Midwestern markets, where the company sells sugar in 4-lb bags for $2.29, consumers get the same amount of sugar, but pay between $2.49 and $2.99 for the canister.

Berry Global announced that its PE squeezable tubes have been recognized by the Association of Plastic Recyclers (APR) as meeting and exceeding APR’s HDPE-01 Critical Guidance.
Berry Global
Oct 23rd, 2020