Hi, I'm Matt Reynolds, Editor of Packaging World Magazine, back with another edition of Take Five. Today I want to talk about candy.

For my lifetime, at least, candy bars, chocolate bars, and candy-coated shells around little morsels of chocolate, I have to be careful about brand names, have been packaged in plastic packaging. For the candy bars, for the most part, that's been horizontal flow wrap. For the morsels, or the smaller bits of candies, that's been pouches.

Vertically form fill sealed pouch formats, but regardless, they've been using a plastic film. And plastic films have done a bang up job on doing exactly what they're meant to do, and that's deliver the candy to the consumer in a safe and intact format. But right now we've seen a strong push away from plastic packaging, rightly or wrongly, for various reasons. Some is just the perception around ocean plastics, and some is with brands attempting to make good on their commitments, whether to Ellen MacArthur or otherwise, for certain incremental sustainability goals, 2025, 2030, whatever it is, to reduce use of virgin plastic.

We've seen a couple of brands, in this case, Nestlé and Mars Wrigley. Both start to move their way into paper packaging for their candy. So why make the switch? I mean, a certain amount of plastic material certainly is recyclable. A lot of it is, but when it comes to these multiple layer structures, multilayer structures with oxygen and moisture barriers, those aren't easily, or oftentimes it's impossible to recycle those, and they still have those negative connotations around plastics in general to contend with.

And then for a brand like Nestle, it gets even more complicated. Not just in the recyclability of the output or the end-life of the material, but in their post-consumer nature of the input material. The company's pledged to reduce their use of virgin fossil fuel-based plastic by a third by 2025. So there just isn't enough PCR, or post-consumer recycled material, to be able to keep feeding the beast.

But then in 2019, they jumped into their Smarties brand. Now Smarties is no small brand. It consists of 419 SKUs, 280 million packs per year, 250 million of which are plastics, and 400 total different formats in terms of shape or pack type. But it made a lot of sense to use Smarties because Smarties is a very children-focused brand, and the folks at Nestle saw this as an opportunity to use the packaging itself to teach good lessons on good recycling behavior and using on-pack messaging to do just that.

Their ambitious goal was to convert all SKUs, all 419 SKUs of Smarties to paper packaging, to have all the paper packs run on existing packaging equipment, and still do its job, keep the product protected to the consumer. So they went with paper, and the result, eventually after two years of testing, was a fiber structure that uses a proprietary water-based coating that gives the material its flexibility. Details get a little bit thinner and more hard to come by when it comes to moisture barrier and oxygen barrier properties, but the bottom line is that Smarties and Nestle are getting the full functionality that they need from the pack.

The Smarties paper packaging rollout was definitely the first and biggest that we've seen, but it's not the only. Elsewhere in the world, we see other brands that are tinkering with different versions of confectionary products being packaged in paper, as opposed to plastics. And one major brand owner, Mars Wrigley, is doing so with a pilot test with their brand Balisto. Hopefully I'm pronouncing that correctly.

This is a test that was essentially only in Germany. It's still going on right now. So we don't really have the results yet. But what we do know is this was an interesting project in how closely they worked with their OEM. Their OEM Syntegon, that's formerly Bosch Packaging.

Syntegon had the foresight to anticipate the shift from plastic to paper packaging a year or two ago. So they created what they called their paper-ON-form retrofit-kit. So basically, that's a flow wrap forming unit with all the ceiling tools for a cold seal to retrofit existing horizontal flow wrapping machinery, to be able to accept paper-based materials.

Working closely with this OEM, Mars Wrigley and Balisto, actually their next step was finding the right material to run on these machines. And this was a difficult process because, because it was a biscuit-based product, they had to be especially careful about moisture barrier. Moisture barrier because that could sog out the biscuit and ruin the crispness and the consumer experience. So after quite a bit of testing, they arrived at something that they found would work quite well.

This Mars Wrigley and Syntegon project is something that we'll be keeping a real close eye on and I'm sure we'll be doing some further reporting on the pilot in the future. 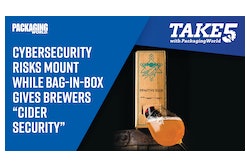 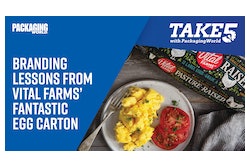 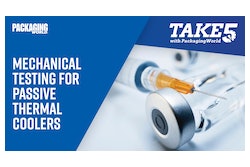