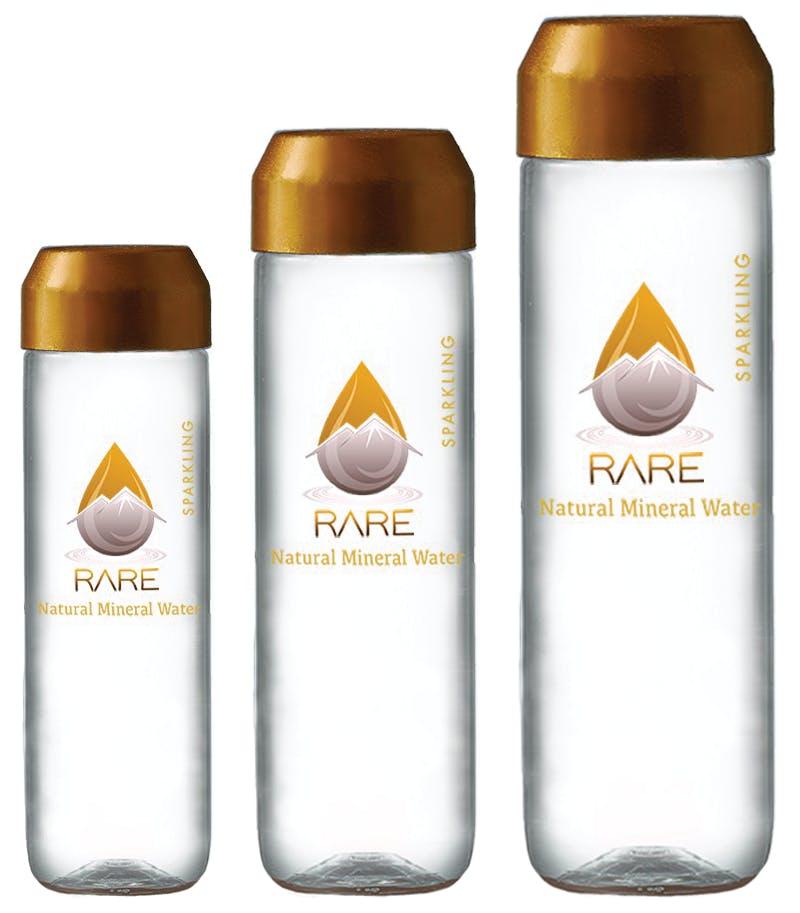 A decorative gold overcap completes the bottles’ elegant look.business. Back in the 1980s he’d managed a family-run operation for bottled drinking water. He thus began developing the ambitious notion of returning to this field of business, this time with a premium product he could market the world over: natural Armenian mineral and spring water from a firm known as A&M Rare.

As far back as 2012 Mussallam contacted the Armenian government, which led him to a number of extremely cooperative individuals in the ministries of the environment and mining. He eventually found what he was looking for in Artavaz in the Kotayk Province in the Pambak Mountains. Here are two springs fed by rare mineral water coming from Anapak Mountain. Following extensive research and analysis, the high quality of this water has been certified by several recognized organizations for a period of five years. These include Geotest in Switzerland, SGS Institut Fresenius in Germany, Zenith Global in Great Britain, and the Armenian National Academy of Sciences. It took Mussallam five years to purchase the full 1,700 hectares of land from the various owners of this sparsely populated stretch of Armenia—but he knew that this was where his bottling plant belonged. 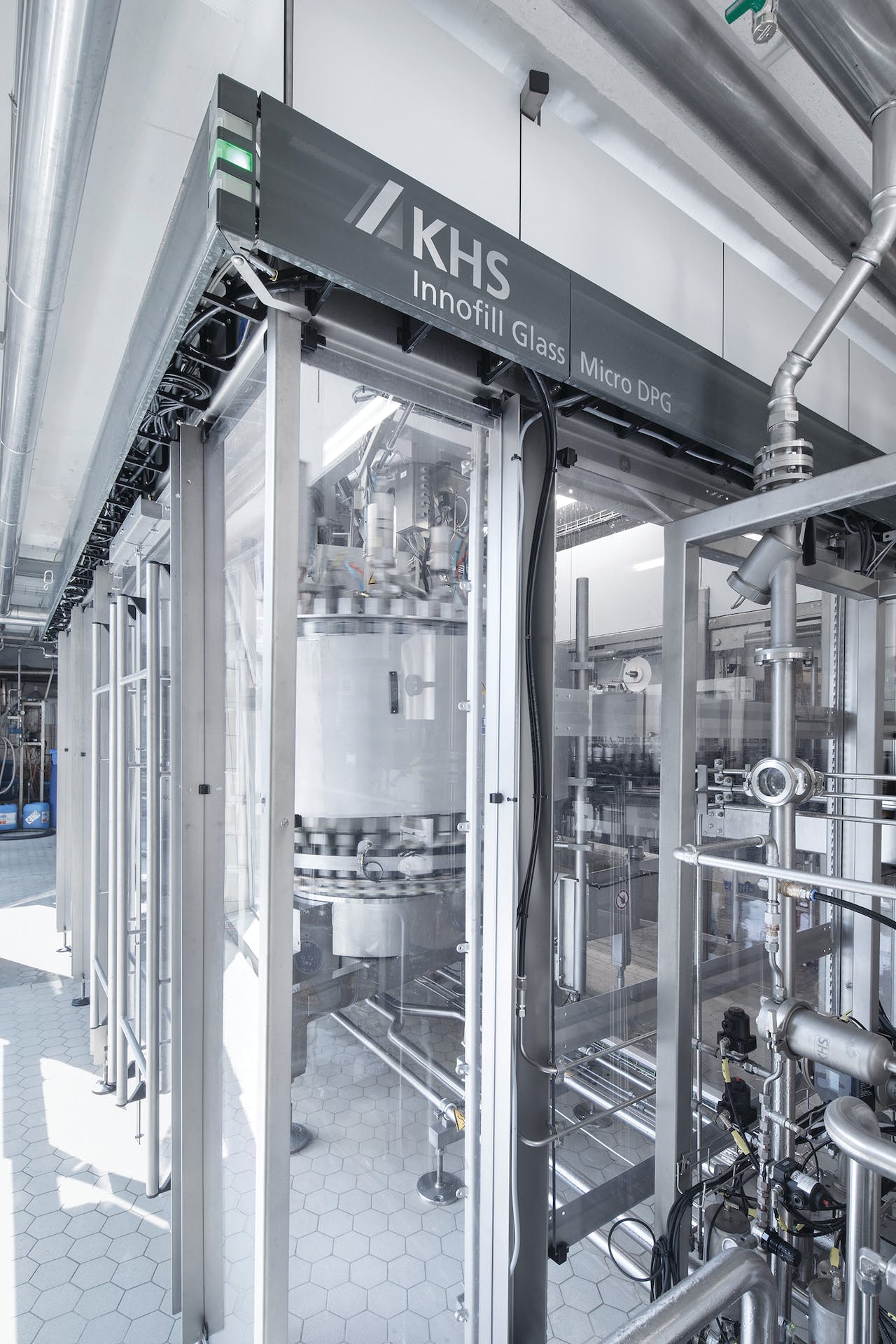 Either carbonated or still water can be filled on the glass line.Mussallam is not a man to compromise. For him the absolute purity and unadulterated quality of his water have top priority. “Our products are completely natural and not treated in any way whatsoever,” he says. “I like to say that the only ‘machinery’ we need to transport the water from the mountain to our plant is gravity.”

He’s particularly enamored of the untainted natural landscape and its special charm at all times of the year. He also loves the culture of the country, whose people he finds especially open, cooperative, and welcoming. This also applies to the political and regulatory conditions for investors.

As his partner for certification, approval, and basic technical concerns, Mussallam chose SGS-TÜV Saar, which advises and supports him on all issues of system, building, machine, and also product safety. It was on recommendation of this company that Mussallam eventually came into contact with the German machinery maker KHS. “It was important to me that we also adhere to the highest possible standards when it comes to production and filling,” he explains. “For me, this includes the provision of high-tech equipment in the form of lines and machines on the one hand and the availability of after-sales service in this rather remote part of the world on the other. What particularly won me over to KHS was that I could procure practically everything from a single source and that we can have a KHS engineer on site at any time within just 48 hours.”

The Saudi businessman also finds it important that the chemistry’s right, which explains why he’s formed quite a friendship with Oliver Schneider, Deputy Head of Sales at KHS. “Even if Mohammed’s relatively new to the business, he knows exactly what he wants and what he’s doing,” says Schneider. “He’s positively bursting with ideas, which we’ve been able to help him realize with great interest and commitment right from the start. He really appreciates this—and this helped us to quickly form a really trusting relationship.” 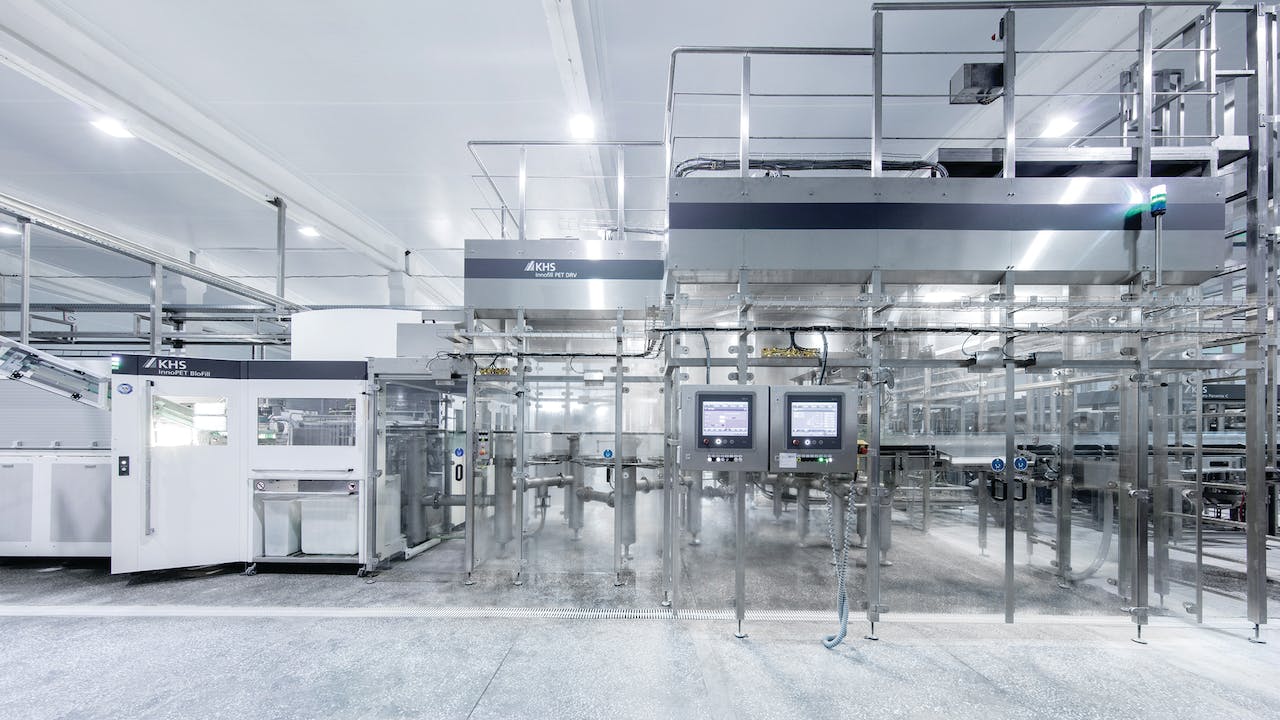 Shown here is the PET bottle blowing and filling equipment. Like the glass line, bottle sizes filled on this blow/fill line include 330-, 500-, and 800-mL.

The experts from KHS have been involved in many parts of the project from the planning of the building and its infrastructure through the technical concept to the design of the bottles, labels, and packaging. KHS has installed two lines, one for PET and one for one-way glass, both with capacities of up to 12,000 bottles/hr. Bottle sizes filled on both lines include 330-, 500-, and 800-mL. While the PET line has a stretch blow molder/filler block, the glass bottling system has a block comprising a rinser and filler.

“In order to meet the high demand for product quality, both blocks and the capper are housed in their own hygienic room,” Schneider explains. “The filling section is separated from the packaging and palletizing section that’s positioned in the warehouse area behind a partition.” Both lines are equipped with a KHS Innoket Neo SK labeler that dresses the bottles with pressure-sensitive, transparent labels in a no-label look.

The packaging area of each line also features an Innopack Kisters WP wrap-around case packer. What’s more, an additional partition inserter has been fitted on the glass line. “This places a corrugated partition in each box to prevent the glass bottles from knocking against one another,” notes Schneider. “In a country like Armenia, logistics is rated differently than in Western Europe, especially if we look at the state of the roads.” Unlike the usual practice in this capacity range, where palletizing is often done by hand, both lines include a fully-automatic KHS Innopal PBL-1 palletizer.

Automation was a key

“Alongside flexibility Mohammed attached enormous value to having a high degree of automation in this section,” says Schneider. “This was undoubtedly one of the criteria that tipped the balance in favor of KHS.” The factory layout is also very efficient: the glass and PET lines are placed opposite one another almost as mirror images in what’s known as a comb arrangement. “It was important to us that we’d be able to operate the lines with as few people as possible,” Mussallam stresses. “As a result, that’s why we also don’t refer to our engineers as operators but as monitors who watch over the line, if you like.” 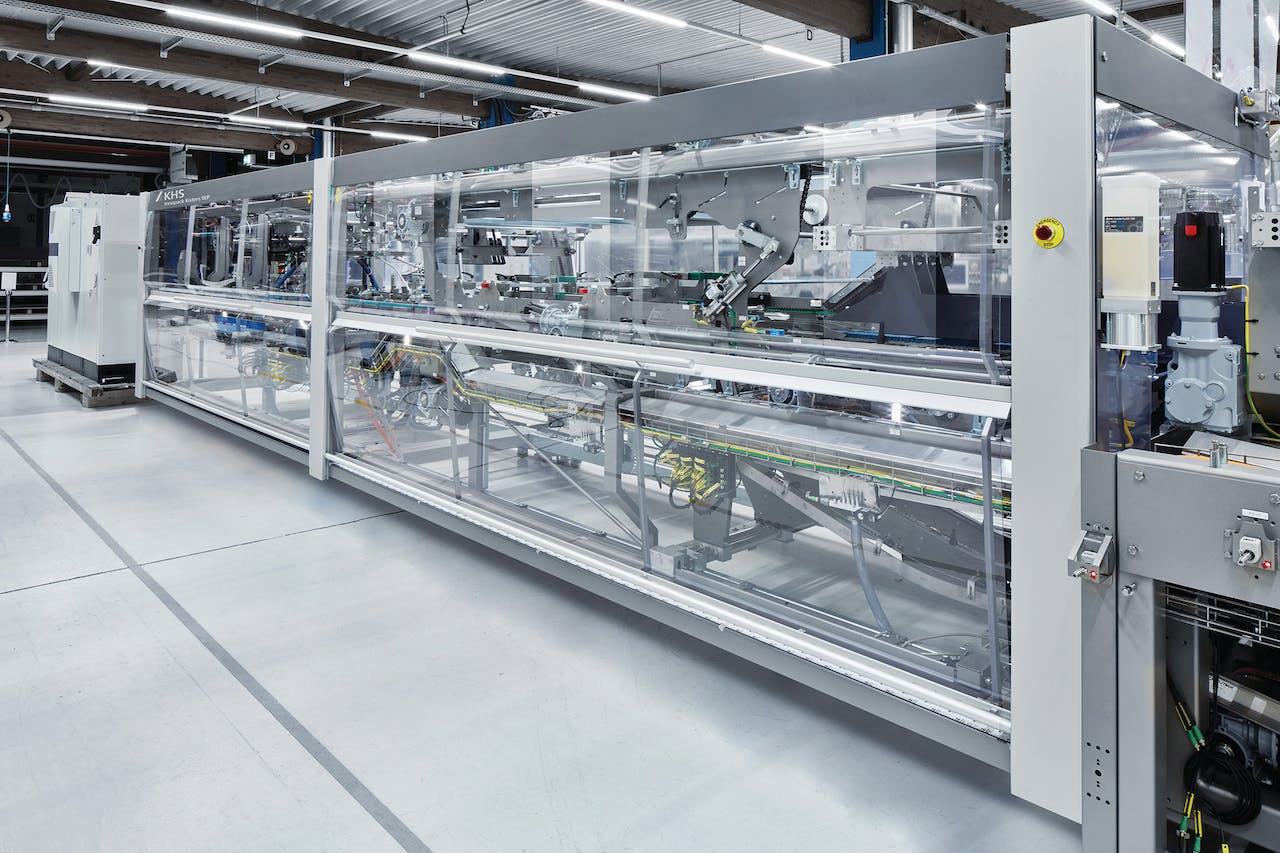 The wraparound case packer includes a fully automated corrugated partition inserter.Mussallam also has very exact ideas and expectations regarding the packaging. He’s opted for a minimalist cylindrical glass bottle shape with a concave bottom that’s sealed with a 28-mm roll-on threaded aluminum cap over which is applied a blue snap-fit decorative cap injection-molded of PET as wide as the bottle. Either carbonated or still water is filled into the glass containers. Currently the PET bottles hold only still water, but carbonated water will come later. The primary closure on the PET bottles is injection-molded of PP, and applied over it is a gold decorative cap like the blue one on the glass bottles. Designing the bottles, says Mussallam, called for a lot of clever engineering—and patience—from KHS. “Each individual detail of both the PET and glass bottle was designed to reflect the brand’s premium positioning and at the same time ensure maximum food safety,” he says.

When it came to secondary packaging of individual bottles, the bottles are not held together with shrink film but packed in groups of twelve in attractively designed wraparound corrugated cases that are then stacked on pallets. This is done on machines also supplied by KHS, the Innopack Kisters WP, with integrated fully automated partition inserters. This excellently prepares them for what’s often a long journey. For with a population of less than three million, a certain amount of competition, and a high percentage of imported water in Armenia, Mussallam reckons on only selling about 10% of his output on the home market. He exports the rest to Russia or Europe, for example. That’s why he’s had his water certified according to EU standards—and to the U.S., the United Arab Emirates, Kuwait—and of course to his native Saudi Arabia.

The investment Mussallam has made in Armenia’s Pambak Mountains represents a total of €22 million ($26.8 million U.S.) with around €6.8 million ($8.29 million U.S.) going into the technology alone. The geographical conditions meant that delivery of the new equipment was a demanding exercise. Transport routes in the mountains are by nature rather restricted. The machines weigh several metric tons, meaning it’s not so easy to move them up to an altitude of over 2,000 meters, especially in wintery conditions. “Communication also required a certain amount of flexibility,” says Massallam. “If you want to assemble people from Saudi Arabia, Armenia, and Germany and an installation team from Ukraine, Kazakhstan, and Russia, you sometimes need two interpreters to move things forward.”

Workers and managers for the new facility were carefully chosen. “We chose the best candidates from the universities,” says Massallam. “We didn’t attach too much importance to experience because we can fully rely on the quality of the training. The pros from KHS teach our colleagues the necessary skills to make them the best in their field.” He can now hardly wait for his two lines to be running at full capacity in the near future so that he can start devoting his time to his next project: Mussallam is already dreaming of a second bottling plant with a big returnable glass line so that he can convince even more consumers of the legendary benefits of water from Armenia.