A six-axis robot positioned in the middle of an automated compounding system's chamber serves as the the primary mover of materials in sterile filling liquids into syringes and bags at Mission Health.

Jim ButschliJim Butschli
A close-up of the RIVA machine that produces bags for three Mission Health products; two in 500-mL sizes and a third in a 100-mL offering.

(Editor's note: Part One of this series described how Asheville, NC-based Mission Health made use of two RIVA™ automated IV compounding systems from ARxIUM that sterile-fill liquids and lyophilized products into IV syringes and bags for administration to Mission Health patients. Part Two takes a detailed look at the syringe and IV bag filling process.)

The RIVA automated system prepares injectable doses in syringes and IV bags for Mission Health, performing all critical processing inside an ISO-Class 5 cleanroom enclosure with managed airflow to reduce the risk of contamination. The overall compounding process is both complex and variable.

Within the machine’s chamber are several automation stations, including a cleanroom version of the Staubli six-axis robot, which is positioned in the middle of the chamber and is the primary system for moving materials throughout the chamber.

Attached to the robot is a gripper with a special multi-tool design that allows it to handle various medication vials, syringes and IV bags. This robot was selected because of its flexibility, accuracy and the non-shedding cleanroom version necessary for aseptic dose processing.

The raw materials needed (medication vials, empty syringes, IV bags and syringe caps) are loaded externally via a flexible inventory carousel system. These materials enter the chamber through successive pass-through systems to minimize any risk of entry of outside air.

[Create a flowchart with the following information]

The carousels are separated from the compounding area via walls and air barriers, and accessed by pass-through doors with air management that is designed to limit outside air from entering the inventory areas. During run-time, the carousels present items as needed to the robot, which loads, stages and supports the processing through all the other stations. This includes interacting with: 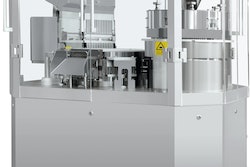 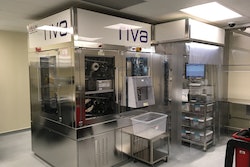 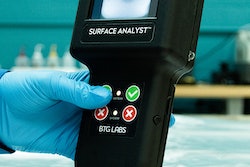