Unit-dose packaging for the garden

Consumers crave convenience, so this lawn and garden products manufacturer serves it up: single-dose pouches of home insecticides.

The rise of single-serve prepared food products on the retail market is a strong indicator that consumers crave convenience. And if that's true for foods, it's safe to assume they want convenience in gardening, too. That was the concept that Gulfstream Home and Garden used in developing GardenTech(TM) Singles(TM), single-dose pouches of lawn and garden chemicals. Four of the Lexington, KY-based company's popular products were introduced nationally this past spring. The package won both the Environmental Achievement award and a Gold Star in the Outdoor/Gardening category in the 1997 AmeriStar Package Awards, sponsored by the Institute of Packaging Professionals. The pouches hold up to 1.5 oz, depending on the product. Directions instruct consumers to open pouches with scissors, pour contents into a watering can or sprayer bottle and mix with water to make one gallon of insecticide. The chemicals are then sprayed on affected areas. Four varieties include Sevin® Insecticide Singles for control of lawn bugs, Diazinon(TM) Insecticide Singles for control of yard bugs, Herbicide Singles for weeds, and Fungicide Singles for plant disease. Says Darren Horst, vp of sales & marketing at Gulfstream, "A lot of food products have been introduced in single-serve sizes. We felt customers have gotten accustomed to purchasing a smaller unit dosage and paying a bit of a premium for the convenience. "We did a lot of research," he continues, "that told us that consumers were (A) confused about purchasing lawn and garden chemicals, and (B) concerned about purchasing larger quantities like pints and quarts of concentrates-which make 30 to 60 gallons of the stuff-because that meant that opened, conventional packages were sitting around their garages for seasons." One of Gulfstream's primary concerns in development of a suitable pouch was child-resistance. Said to be the first time a mainstream chemical product has been put into a pouch, keeping children from coming into contact with the chemicals was a high priority. The company chose Valeron® film from Valéron Strength Films (Houston, TX) for its protocol-tested and child-resistant performance. With the help of Valéron Strength Films and converter Star Packaging (College Park, GA), the company developed film comprising a six-color reverse-printed 48-ga Mylar® film from DuPont (Wilmington, DE), 3-mil Valeron, a high-density polyethylene layer, and 1.5-mil of DuPont Surlyn® as a heat-seal layer on the inside. Other benefits of the pouch, which measures 3" x 5", include reduced materials cost. Compared to a 1-gal rigid HDPE container, packaging costs are reduced 87%. Source reduction is 97%, says Valéron Strength Films, and shipping weights are said to have been reduced 99% compared to a 1-gal container. Another consideration was EPA regulations. The small size of the pouch didn't allow sufficient space for all the mandatory product infor-mation. Gulfstream's answer to this dilemma came in the form of a booklet label from CCL Label (Itasca, IL). But unforseen problems came when contract packager BPS, Inc. (Helena, AR) wanted to affix the labels in-line, at the time of production. CCL Labeling Equipment (Monrovia, CA) custom-built a labeler that applies the labels right on the company's horizontal form/fill/seal machine. The labeler, says CCL, is one of the first of its kind. With those initial bugs worked out, BPS was ready to roll into production. Using rollstock from Star Packaging, BPS produces the pouches at speeds of 60/min. Compared to 1-gal jugs, this translates into a 445% increase in speeds. After pouches are sealed, they're sent in bulk to Samples Partnership (Berlin, NJ) for secondary packaging into folding cartons consisting of 20-pt SBS. These are placed into corrugated shippers consisting of 200#-test, E-flute kraft paper that double as a point-of-purchase display. Both are from Rock-Tenn (Norcross, GA). Holding 160 units, the display measures 14" wide x 32" high x 4" deep, and weighs only 14 lb. This allows easy positioning in high traffic areas of stores, while reducing warehouse space. Suggested retail price ranges from $2.49 to $2.99 per pack. Competitive full-strength products retail for about $12 per gallon, says Gulfstream. GardenTech Singles are available in Kmart, Lowe's, True Value Hardware, and in Home Depots in the Southeast. The product has been successful enough to warrant introduction of a fifth product to fight fire ants. 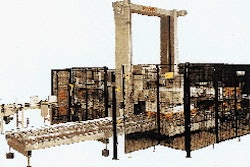 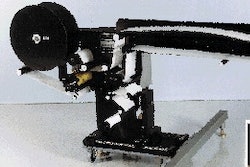