The voluntary label from GreenBlue has been designed to help reduce consumer confusion over recycling and to provide a consistent, accurate labeling system. 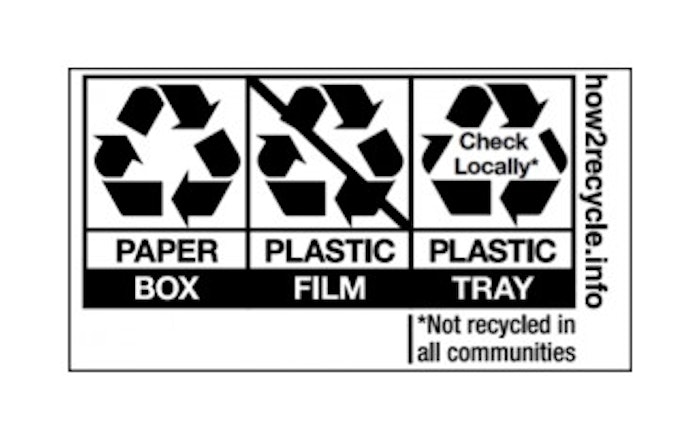 Sustainability nonprofit GreenBlue has released a new report, “Labeling for Package Recovery,” and has announced details for a 2012 national pilot of the new Packaging Recovery Label System, a voluntary label developed by the organization’s Sustainable Packaging Coalition (SPC) to communicate to consumers how to recycle a package after its use.

Among the companies that have agreed to implement the label on select packaging nationwide starting in 2012 are ConAgra Foods, Costco Wholesale, Microsoft, REI, and Seventh Generation.

The goals of the labeling system are to reduce confusion for consumers with clear instructions on how to recycle a package after its use, and to develop a consistent, accurate labeling system for companies that adheres to the Federal Trade Commission (FTC) “Green Guides” and uses nationally accurate recyclability data.

“Consumers are faced with a confusing landscape of recycling messages and instructions that are often inconsistent or misleading,” says GreenBlue project manager Anne Bedarf, who has led development of the labeling system for the SPC. “We believe this label will create a harmonized system that will help consumers and companies contribute to more effective resource recovery.”

Given that recycling systems vary significantly by municipality across the country, each package component is labeled as “widely recycled,” “not yet recycled,” or “limited recycling,” with instructions for consumers on how to check locally. The system was based on the successful OPRL system in the U.K.  and developed through three years of research, including extensive consumer testing and a national effort to collect updated recyclability data.

GreenBlue has launched a Web site for consumers as part of the labeling system, which provides information on how to check locally, as well as information for local governments and companies interested in getting involved. Following the conclusion of the pilot phase, the label will be available to any interested companies to use.

The report presents requirements for an effective labeling scheme, where the label should:
• Match its stated objective
• Be actively administered and enforced nationwide
• Be easily recognized by consumers
• Have the ability to drive positive action
• Be easily adaptable to new packaging material types, formats, and recovery systems

The SPC developed its Packaging Recovery Label System specifically to meet these requirements for the U.S.