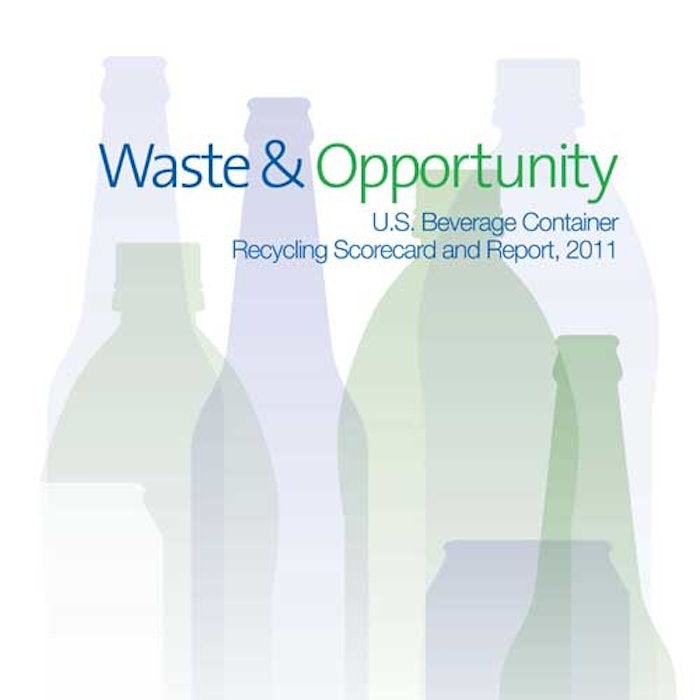 Several major U.S. beverage brands would support new laws making producers financially responsible for collection and recycling of post‐consumer beverage packaging, according to a new report assessing corporate progress on recycling released by shareholder advocacy group As You Sow.
The new report, “Waste & Opportunity: U.S. Beverage Container Recycling Scorecard and Report,” is As You Sow’s third review of the beverage industry since 2006. Nestlé Waters North America received the highest ranking, followed closely by PepsiCo, The Coca‐Cola Company, and Red Bull. All four received a letter grade of B‐.
The report discusses new efforts by several companies to promote Extended Producer Responsibility (EPR) mandates to reverse lagging U.S. bottle and can recycling rates. “The major development since our last survey has been the willingness of leading beverage companies to consider new legislative mandates requiring them to take responsibility for their post‐consumer packaging,” says Conrad MacKerron, senior director of As You Sow’s Corporate Social Responsibility Program. “Many beverage and consumer packaged goods companies pay fees in other countries to finance recovery of their packaging. It’s significant that companies are finally acknowledging the need to take responsibility in the U.S. as well.”
Of the 224 billion beverage containers sold annually in the U.S. only 29% by weight are recycled, says As You Sow; the rest are landfilled or incinerated. In Europe and Canada, where EPR laws are in place, far higher levels of containers are recovered.
“This report reflects the importance As You Sow is placing on an improved recycling model in the U.S.,” says Michael Washburn, director of sustainability for Nestlé Waters North America. “We have learned a lot in the process and appreciate the recognition of our leadership in this space. We hope this dialogue spurs even greater commitment by our industry to recycling.”
The report is based on original research and scores companies on key performance areas in packaging. Grades were based on information submitted by companies that responded to the survey. Those that did not respond were scored based on publicly available information.
“Several leading beverage companies continue to make steady incremental progress on source reduction but have not demonstrated strong commitments to using recycled content—a significant driver in reducing the environmental impact of packaging,” says Amy Galland, Ph.D., As You Sow’s research director and author of the study.
Only PepsiCo maintains a consistent level of 10% recycled PET in all product lines sold in the U.S. since 2005. Nestlé Waters received the highest score on container recovery for having better recovery goals and stated tactical strategies for attaining them than its peers and it, along with PepsiCo and Red Bull, has stated industry-wide recovery goals.
Brewing companies were notably absent from the survey participants; Anheuser Busch refused to participate, suggesting its transparency policies are getting worse. The company received the second highest score in the 2008 edition of this report.
Key findings
Several survey respondents said that in developing a recycling program, they are most likely to support programs that set recycling fees paid by producers or importers that are included in the price of the product and administered by industry.
The Coca‐Cola Company, historically opposed to container deposit systems, indicated it is now “neutral” on a voluntary deposit system administered by associated industries, an apparent softening of its position.
Since As You Sow’s 2008 “Waste & Opportunity” report, there have not been significant increases in recycled content:
• PepsiCo continues to have the highest use of rPET, 10% across all product lines, with a commitment to maintain  and increase this percentage.
• Coca‐Cola was unable to meet a commitment to use 10% rPET across its product lines in 2010.
• New Belgium Brewing Company currently uses 50% recycled glass, the highest reported, in its 22-oz bottles.
• Nestlé Waters uses 50% recycled PET in its re‐source™ brand bottles, but lacks a company‐wide commitment for  reprocessed PET or rPET.
Key recommendations from As You Sow • The beverage industry needs to greatly increase engagement and integration with stakeholders and other industries such as consumer packaged goods and grocery retailers that produce private labels in order to have strong buy‐in for producer responsibility packaging legislation and to reach agreement on related policies to increase beverage container recycling rates.
• Anheuser Busch and MillerCoors need to participate in future surveys and set aggressive recycling goals, increase disclosure, and work with other brands on ways to jointly boost container recovery.
• Companies should put more resources into designing packaging for recycling that includes full consideration of the end‐of‐life aspect of packaging and, where possible, promotes closed‐loop systems.
• Companies should use life-cycle assessment data to make decisions to reduce the environmental impact of packaging.  As You Sow has engaged with leading beverage companies to improve the environmental attributes of their packaging and to take responsibility for recovery of bottles and cans. It has received commitments to recycle a majority of post‐consumer containers from Coca‐Cola, Nestlé Waters, and PepsiCo.