Less waste, accelerated speed to market, and anticounterfeiting advantages are some of the benefits gained through on-demand digital printing of folding cartons. 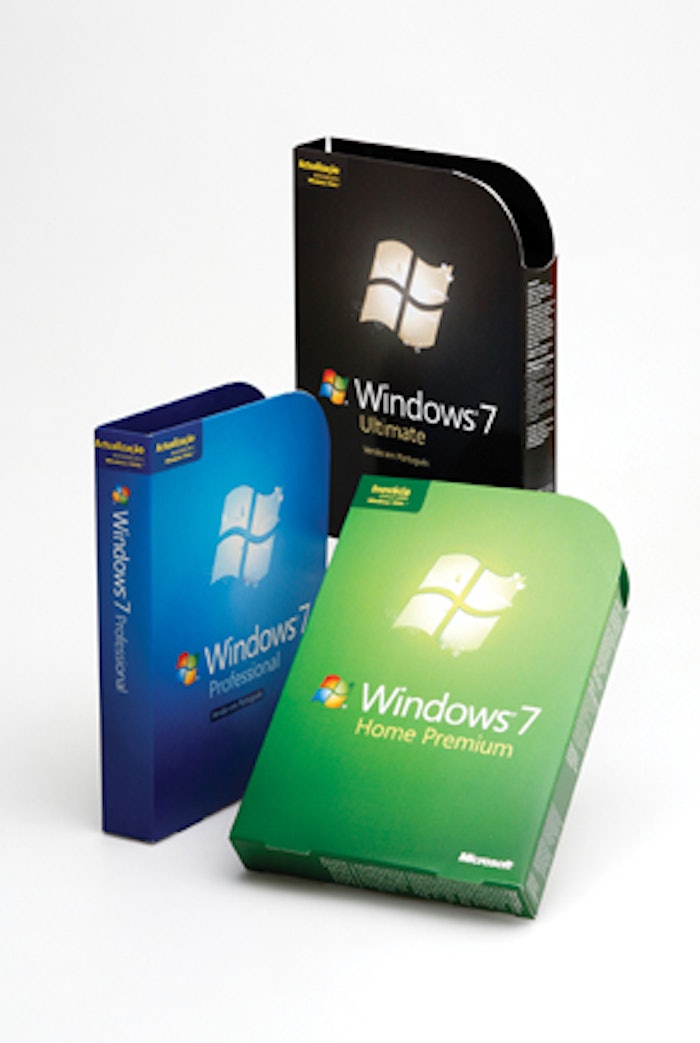 The timelines behind this successful application are impressive, to say the least. Once Mediaware got the nod from Microsoft, it had just six weeks to ramp up. Microsoft, after all, was not going to change its software launch date, so Mediaware and technology partners Xerox and Stora Enso had to meet the October deadline. In a six-week time frame, the team built out the 8,000-sq-ft facility in a secure, climate-controlled environment, tested the IT infrastructure, appropriately staffed the organization, and met Microsoft’s delivery expectations.

Microsoft wanted a solution that would speed its supply chain, handle short runs for many countries, and reduce the overall cost of packaging in multiple languages. Mediaware chairman Simon Healy and the team at Mediaware recognized the benefits of digital technology. Working closely with Xerox, Mediaware successfully introduced a new digital workflow approach that helped them capture the Windows 7 folding carton converting assignment.

Because the workflow is built around a digital printer, it enables lower minimum orders, less waste, less storage, and quicker time to market. An added benefit gained is more secure printing because Mediaware prints a unique code on each carton, allowing item-level tracking worldwide. The total solution prints a precise number of cartons per job, cutting the risk of counterfeiters gaining access to legitimate packaging.

“Early on, we also saw it as a more sustainable process,” says Healy. The environmental advantages of digital printing for folding carton packages include reduced ink and substrate waste from make-ready and die-cut scraps. “We’ve found,” adds Healy, “that digital technology eliminates surplus inventory and overruns as well as plate production, saving the environment, budget dollars, and physical space.”

Today, Mediaware delivers two sizes of folding cartons for Microsoft. The material used for them is Stora Enso’s 330 gsm Ensocoat board, which has been newly improved to provide a superior visual appearance. Microsoft’s specifications were demanding, requiring printing a stream of short runs of glossy, full-color, folding cartons in dozens of languages. Production had to begin in time for the launch of Windows 7 in October 2009, and it needed to satisfy Microsoft in terms of price, quality, environmental footprint, security, and integration with Microsoft’s workflow. The first step in the carton-production process is printing, which is done on the sheet-fed Xerox iGen4 digital printing press. The material is coated inline with a water-based but high-gloss formulation. This addresses Microsoft’s requirements for “green” chemistry and a sleek appearance.

Run lengths at Mediaware vary greatly, from just 5 cartons to around 2,500. Total volume, which now is also attributable to other customers besides Microsoft, varies but is currently between 10,000 and 15,000 cartons per day.

Mediaware also needed to integrate with the client’s workflow and supply chain to deliver what was needed, when it was needed, and in the exact quantity required. Mediaware and Xerox developed a software solution that provided close coordination between production and consumption as well as the ability to operate with “lean” supply chain manufacturing principles. Utilizing Xerox’s PrintCise software, Mediaware’s own proprietary ArcLink program, and the Xerox Automated Packaging solution, Mediaware created a system that could accept orders via the Internet, print in multiple languages, quickly switch from one language to the next, and produce small batches with relevant consumer information. This digital packaging solution significantly reduced minimum order quantities. The inline finishing meant that Mediaware could produce customized packaging cost effectively, without having to stop production and manage offline equipment.

Workflow of the future

The competing bids for the Microsoft contract offered solutions bound by the old rules of conventional analog offset print technology. Competitors relied on the old business model, printing short runs in analog for the best unit price they could offer and storing excess prints for possible use with later orders.

Mediaware, on the other hand, put together a workflow of the future. It’s integrated with Microsoft’s order entry, manufacturing, and delivery operations, and it was critical to meeting and exceeding expectations and requirements. Here is the basic sequence for each of the hundreds of folding carton print jobs Mediaware has delivered to Microsoft since October 2009:

• Initially, Mediaware takes a forecast from Microsoft and downloads the artwork from Microsoft’s global repository into Mediaware’s document library within the Xerox PrintCise program.

• ModusLink, Microsoft’s tier 1 kitting partner in Waltham, MA, places an order to Mediaware in the form of a .CSV that automatically generates a component of the overall bill of materials.

• The .CSV file is dropped into Mediaware’s MIS system. Mediaware’s proprietary ArcLink program automatically generates a work order and places it into PrintCise. • PrintCise automatically retrieves the artwork from the library, adds variable information (country of origin, printer ID, and bar code verification), and drops the job on the iGen4 digital printer complete with a job ticket.

• The iGen4 feeds via Internet Printing Protocol (IPP) back to PrintCise the status of the job in real time.

• After printing, coating, die-cutting, and gluing, weight verification acts as a final quality control to confirm that the appropriate number of folding cartons was produced. PrintCise outputs a value to a weighing machine. If the value meets the actual weight, a delivery label is released. If not, the job goes into quarantine for evaluation.

The Mediaware workflow is so automated that human hands normally do not touch the carton until it is ready for insertion into the folder/gluer. The jobs are segregated into two queues, one for each carton size, limiting the need to change the settings on the folder/gluer.

There is no hard copy order. As with other Web-driven print applications, this means that there is no need for intervention from customer service representatives when jobs are released from Microsoft. According to Healy, “We can complete a job from the initial email order to the completion of die cutting in less than 45 seconds.” With its internal IT group, PrintCise, and the Xerox Automated Packaging Solution, Mediaware has basically developed an automated Web-to-print folding carton business. Plus it comes with sustainable packaging benefits.

“Our system cuts the waste associated with conventional folding carton converting, including overruns and inventory obsolescence,” says Healy. “While we can’t quote exact dollar amounts, we have clearly delivered substantial cost savings to Microsoft.” Healy also emphasizes that while this is a business solution that has met Microsoft’s expectations, it has tremendous viability for a broad range of folding carton applications from retail to pharmaceutical. “Pharmaceutical companies, in particular, have some of the same business needs that top software companies have,” says Healy. “They have a regular use of small-format cartons, they sell internationally, and they have a high need for secure print.”

“Digital, print on-demand packaging meets the current cost cutting and lean manufacturing initiatives but it also creates opportunities for increasing customization and targeted marketing, such as the packaging for retail chains or for seasonal products,” says Pekka Tommola, director of Stora Enso Digital Solutions. “The ability to coat aqueous formulations for companies needing FDA approval for use with food and drugs opens the way to use the Gallop line for example in the production of chocolate boxes or pharmaceuticals packaging.”

As for the Microsoft Windows 7 project, it proves once more how critical a role packaging can play in helping brand owners achieve their objectives. Mediaware’s Healy sums it up nicely.

“We listened to the brand owner and knew that we could not compromise on quality or appearance. We needed to prove that our solution would work.”

This story is adapted from a case history report written by InfoTrends, Inc.