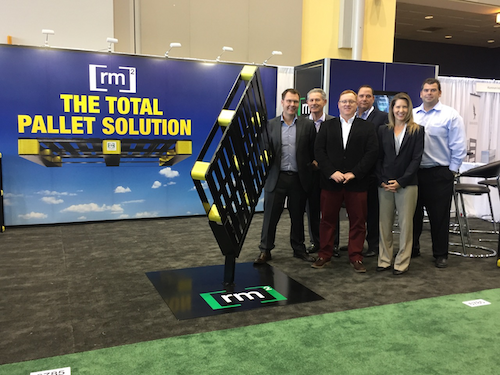 RM2 International, a vertically-integrated pallet development, management, and supply company, announced its participation in AT&T’s LTE-M network pilot that aims to boost connections for the Internet of Things (IoT).

AT&T is working with a variety of technology suppliers, to include RM2, to showcase the LTE-M technology that will bring the IoT to a new generation of devices and markets. AT&T has launched North America’s first LTE-M enabled commercial site in the San Francisco market to support the pilot of AT&T’s LTE-M low-power wide-area network beginning later this month. AT&T plans to make the technology available across its commercial network throughout 2017.

“Our work with RM2 during our LTE-M pilot will show how this new technology can help the packaging and supply chain industries increase their efficiency and sustain the integrity of their products,” says Chris Penrose, president, IoT, AT&T. “This a prime example of how innovations like LTE-M will help bring the IoT to more end points than ever before.”

“Delivering to the market a first of its kind technology solution while being a part of a group that will take this offering to the next level gives RM2 a unique product offering that separates itself from other pallet service providers while guaranteeing its solution remains at the forefront of the technological evolution of the Internet of Things,” says John Walsh, CEO, RM2.

Theft and sabotage in the supply chain is big business

Supply chain theft is estimated at $35-40 billion per year in the US, and today’s threats to the commercial supply chain are different than those of the past. Logistics companies are perfect targets, and those that aren’t aware of the changes are more likely to fall prey.
Kim Overstreet
May 9th, 2019

Innovation in the supply chain

Technology, e-commerce, digitization and customer experience are all driving supply chain innovations. How do we organize and implement innovation, to stay on the forefront of modern change?
Kim Overstreet
May 2nd, 2019

As a supply chain grows from regional to national to international to global, it better reflect the fundamentals of intermodalism and what it implies for packaging.
Sterling Anthony
Apr 18th, 2019

Robotics, augmented reality and digital transformation will be top of mind for the future of supply chain logistics, as well as e-commerce and customer experience.
Kim Overstreet
Apr 12th, 2019

It can outwardly appear to be a zero-sum game of competing goals. But brand owners, machine builders, and controls suppliers pulled the curtain back on they realities they face and the masters they serve in a play to work better together.
Matt Reynolds
Mar 20th, 2019

Food and drug retailer to begin using paper-based containers for its temperature-sensitive shipments in late February, with the goal of diverting up to 75,000 lb of packaging from landfills every year.
Jim Butschli
Jim Butschli
Feb 12th, 2019

Fitting track and trace into a patient-first culture