Having braved its own journey into Amazon’s Ships in Own Container (SIOC) certification demands, KDP packaging engineers explain what’s required to ready products for e-commerce delivery.

It’s a brave new e-commerce world. Having large, well-equipped brands that are willing to share their lessons learned can go a long way to helping smaller companies successfully traverse the new terrain. When it comes to navigating rules for Amazon’s Ships in Own Container (SIOC) certification, one company that thought it might help others alleviate the growing pains it went through itself was Keurig Dr Pepper (KDP).

SIOC certification is now required for certain products in order to ship through Amazon. “How to interact with this program has really come into focus at KDP,” said Luke Magnant, packaging engineering manager for secondary packaging at KDP.

Amazon’s SIOC certification—announced in September 2018 as part of its sustainable packaging programs—was designed to reduce waste, lower supply chain costs, and enhance the consumer experience. Any large packages shipped through Amazon that do not meet the requirements will receive a $1.99 chargeback. They must be “right sized, protective against damage, ready-to-ship without the need for additional packaging, and ideally easy to open, and recyclable,” Amazon informed its vendors.

Magnant, along with Kara Revoir, KDP packaging development engineer, explained the steps the CPG took to better understand where its products fell into SIOC classifications, how eligibility was determined, tests run, and—ultimately—how packages were redesigned to satisfy e-commerce needs.

Back to the drawing board

Getting your package ready to meet Amazon’s demands is not only about appeasing the e-commerce giant. It will ultimately help your products arrive to your customers intact and ready to enjoy.

In a webinar presented by the International Safe Transit Association (ISTA), Magnant and Revoir showed how changes to the packaging for Keurig McCafe coffee pods not only helped to qualify it for Amazon’s SIOC standards but also enabled it to withstand the vibration and shock of typical shipping scenarios.

The club store format of the Keurig McCafe carton was designed for retail shelf impact—loose pods in a litho lamination case. To determine whether that package could also withstand the rigors of e-commerce, it was classified according to its weight as well as shipping and handling methods and then run through a series of tests, including condition, a drop sequence, vibration, and another drop sequence.

“We failed at two points,” Magnant pointed out. The outer liner suffered a significant amount of vibration damage, and the perforated opening feature ruptured during the second drop sequence. “We had to rethink what that package needed to look like.”

When KDP ran the club store format of its Keurig McCafe carton through a series of tests, it failed at two points: The outer liner suffered vibration damage and the perforated opening feature ruptured during the drop sequence.Keurig Dr Pepper

What KDP came up with was a package that looks considerably different than the original. They replaced the outer liner with a basic Kraft liner and removed the perforated opening feature. Then they brought the redesigned case back to testing—it passed, and the SIOC test results were ready to submit and KDP was ready to enroll the product for SIOC certification.

Getting all your pods in a row

Altogether, there were four major phases of preparation for KDP to enter into the SIOC program: impact assessment, eligibility of products in its portfolio to make sure they met certification, test execution, and enrollment into the program.

“When Amazon made the announcement, we all had to figure out how to react,” Magnant said. At KDP, they organized the impact assessment into three zones.

“This would help us understand why certain products are at risk for a chargeback,” Magnant said. “The first thing that really defines the three zones is whether it’s required or eligible—whether it’s sortable or not, whether the package can fit a shipping label. If the package is too small or oddly shaped to fit a shipping label, it isn’t eligible.”

KDP began by focusing just on Zone 1. “Ultimately, what we really care about are products that fall into Zone 1 only,” Magnant said. “That would become your chargeback-eligible list.”

Once you have a handle on which of your items are impacted, then you can begin to understand if they’re actually eligible for SIOC certification, Revoir notes. Similar to how it did for impact assessment, KDP divided all its products into eligibility groups as well:

With these criteria in mind, Keurig Dr Pepper was able to show some clear examples of the sorts of products they found in their portfolio and how they did or didn’t meet the certification demands. In one case involving cartoned Keurig pods, for example, the carton was clearly eligible. While the eligibility of other cartons was in question because of large gaps in the top or handle holes on the sides, another example—bai drinks in a tray shrink format—fell squarely into Group C, Revoir commented. 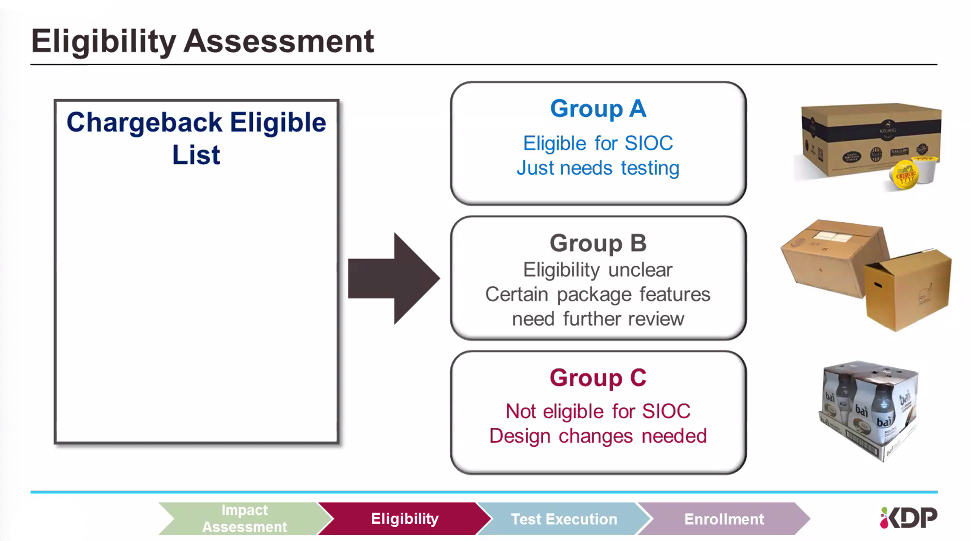 KDP divided all its products into eligibility groups for the SIOC program based on whether they met all criteria for eligibility, if eligibility was unclear, or if products were clearly not eligible.Keurig Dr Pepper

Products move through the next phase in a similar manner. Products that fall into Group A can move into testing. Again, there are three options for testing:

Of course, many manufacturers will not have the kinds of resources that KDP has at its disposal. However, the first two testing options will require having to pay or find the right partner to work with. They will also both require travel or a remote pass/fail. And it will take more design iteration turnaround time.

“When it comes to using an internal certified lab, you have the ownership of the pass/fail evaluation. That comes in handy when you’re trying to have a clean baseline. You get an unlimited number of test attempts and design iterations, and you can collect results over time to build a benchmark database,” Magnant said. “We might be a little biased, but it’s certainly a capability that’s worked really well for us.”

Of course, knowing that not everyone has those resources is certainly a part of what led Magnant and Revoir to share its experience in the first place.

Enrollment in Amazon’s program, done through Amazon’s Vendor Central portal, involves completing two documents from Amazon—a test report and an enrollment template—and then also verifying approval in your case log. But KDP added a few steps to its enrollment cycle to improve the process for themselves internally, Revoir noted.

There are several things that can generate the need for SIOC work at KDP, including new product development, ongoing maintenance of business, acquisitions, and limited-time offers. “That results in a lot to wrangle with,” Revoir said, including one-off request, multiple business leads, lab planning complexities, and repetitive requests for the same parent Amazon Standard Identification Number (ASIN). “We’re figuring out how-to plans for the resulting lab work.”

In addition to Amazon’s steps, KDP has established: 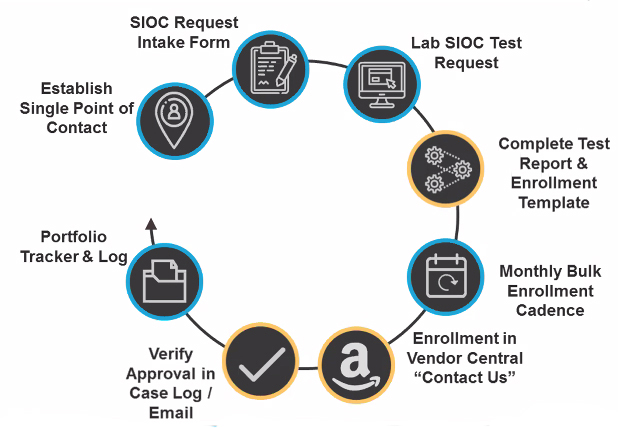 In addition to the steps established by Amazon (in yellow), KDP added several other steps (in blue) to its standard SIOC procedure.Keurig Dr Pepper

Though Revoir espoused the benefits of talking directly with Amazon if you have any questions, she advocated first visiting Amazon’s information portal at aboutamazon.com/sustainability/packaging. “It’s Amazon’s pond to fish from,” she said, complete with templates and examples.

Magnant echoed the benefits of beginning with the website, where there is a lot of information. “That said, we did run into several instances along the way where we did run into a gray area. Their guidance would be to start with the website and look at tutorials. But then talk with lab technicians about areas that might be more gray,” he said. “Without everybody jumping on Amazon to pepper them with questions, first go to the website to self-help, but then Amazon is willing to partner and have conversations.”

Oftentimes, a material supplier will be an APASS member and might be able to offer you guidance as well, Revoir added. “It’s worth asking your suppliers if they have a direct contact, and it’s more than likely that one of them will,” she said.

How are brands coping with changes in the market, distribution and consumer behavior?
Keren Sookne
Feb 4th, 2021