The most recent business intelligence report drafted by PMMI about investment in packaging operations in Mexico confirms growth during the second quarter and projects significant increments for the following months.

The data regarding investment performance of the 5 main industries that use packaging machinery in Mexico –included in PMMI´s Purchasing Index Mexico - 2nd Quarter 2021 report—, confirms the forecasted growth figures, and underlines the intention or manufacturers of beverages, foods and food preparations, personal care products, pharmaceutical and medical supplies, and other goods (durable/industrial/hardware, chemical, paper and printing goods) to continue consolidating their production capacity this year. 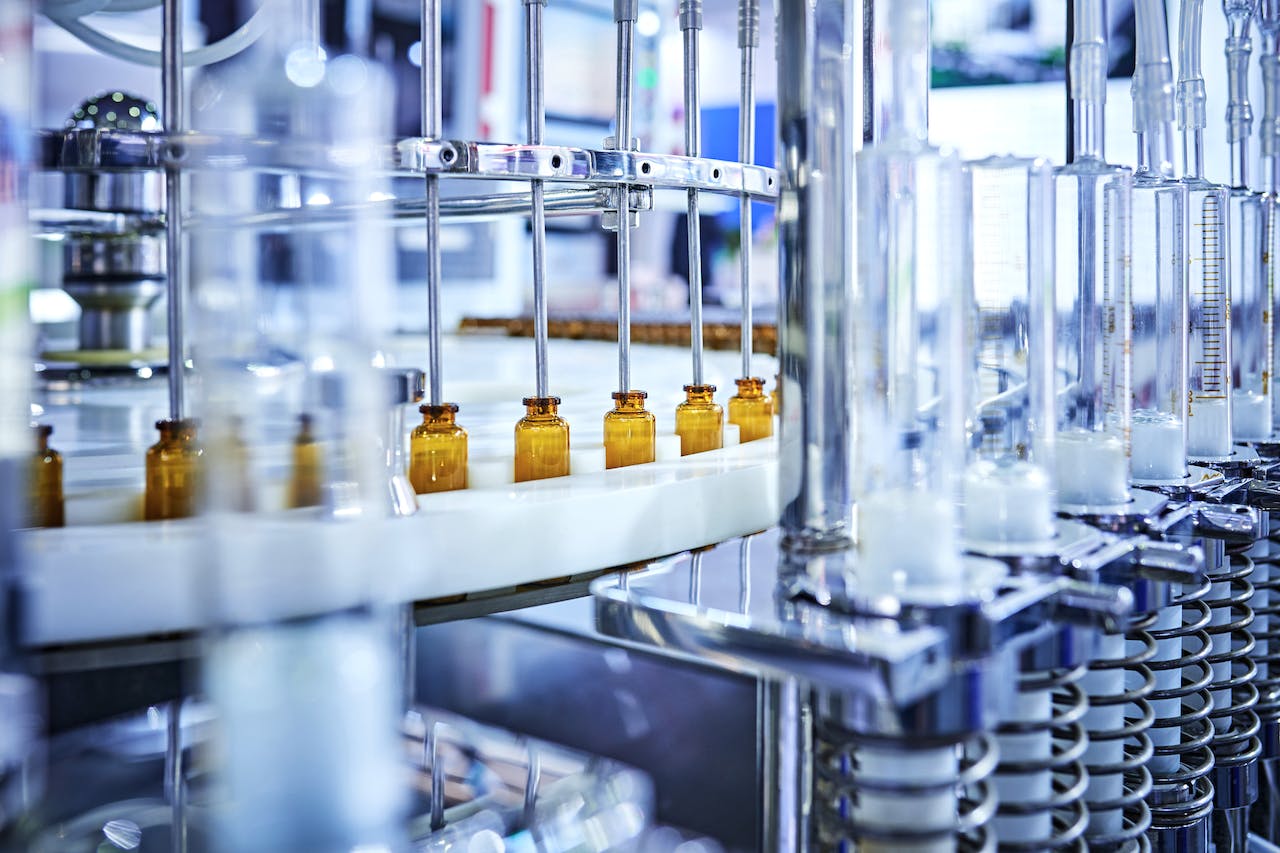 The continued pace of investments during this year seems like a positive indicator of the climate of confidence that is strengthening after the first year of the pandemic, as much as a sign of the intention of Mexican CPGs to maintain a leading role in pushing the productive and economic recovery of their country.

Mundo PMMI’s inquiry with directors at Consumer-Packaged Goods companies in Mexico was about investments made during Q2 of 2021, those underway in Q3, and the expectations for prescheduled ongoing projects. Likewise, we asked about SKU (stock keeping units) numbers for the months of April, May, and June, as well as what the expected figure is for Q3, between July and September.

Using the same methodology as the initial report, we recorded the performance of each sector by comparing it with the industry as a whole, setting the index for absence of change the middle point (50), and specifying growth or shrinkage for each variable with values that exceed or are inferior to this reference.

Comparing the data provided by beverage brands in Mexico for the second quarter against that of Q1, we can clearly see a growth trend for all consulted aspects. Investments for this period vastly outgrew those made by the industry in aggregate (See Graph 1), representing a 19.2 points increase over expenditures made during Q1. Investment plans for the third quarter also surpass the industry’s totality figures and grew 10.1 from the previous period. Similarly, the Mexican beverage sector expanded its number of prescheduled ongoing projects.

Even more significant is the raise in manufactured SKU, which went from a 51.7 rate during the first quarter to 73.9 in Q2, increasing at a higher rate than the market’s aggregate. Projections for this second index also indicate a higher number of manufactured units for July through September. 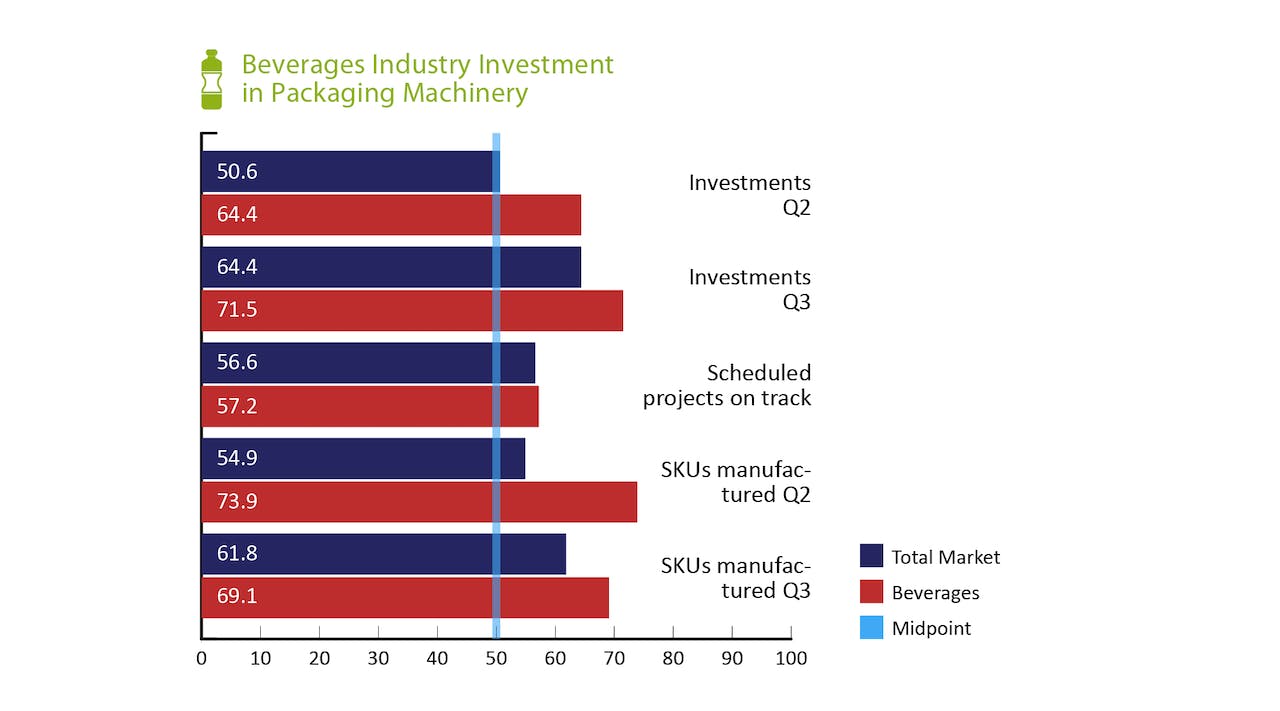 End users in the Beverage industry are reporting increased investment activity over the Total Market in every metric.PMMI Business Intelligence

The food industry, which in the first quarter was below the point of growth for investments in packaging machinery, displayed an increase of 3.9 above that level during the third quarter. At the same time, it outgrew the market’s total. For the third trimester this tendency was exacerbated and is now reaching the 68.8 bar, far exceeding the estimates for Q2 with 59.2, slightly over the market’s sum of 64.4 (See Graph 2).

Ongoing projects grew moderately in comparison to the previous trimester, with a higher index than shown by the whole market. Top executives from this sector also reported an increase in the quantities of manufactured SKU during Q3, with a growth expectancy that would reach 65.4 points, leading over the market’s total projections by 3.6 points. 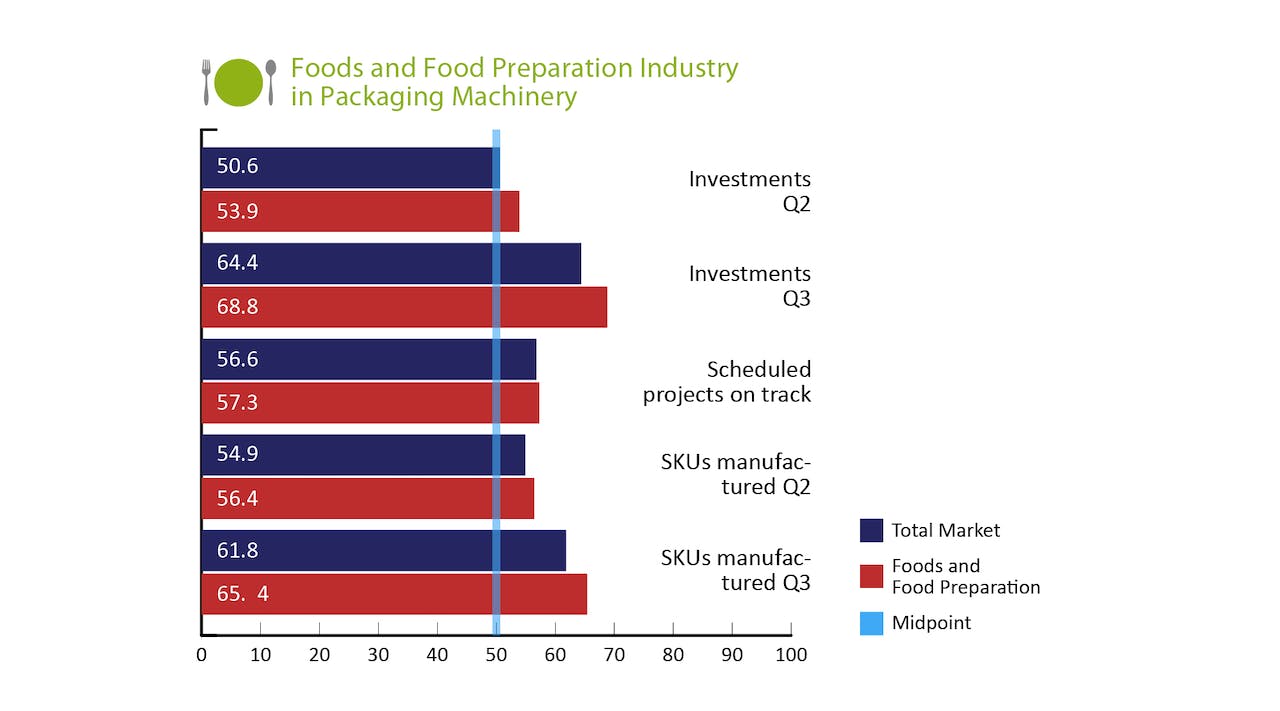 Respondents in the Foods and Food Preparation industry are expected to grow in every metric at a faster pace compared to the Total Market.PMMI Business Intelligence

Moderate growth indexes for the personal care products sector in terms of packaging machinery investments showed companies had projected to growth to 62.8 points for the second quarter of this year, 4.1 points less than what had been estimated, placing them also below the market’s compound figure (See Graph 3). The behavior during the analyzed trimester (April-June) was similar to that of the market as a whole and slightly better than the first quarter’s when the index reached 48.8.

For the third quarter executives in this sector expect moderate growth (58.7), still slower than the aggregate market. This, in a scenario where prescheduled ongoing projects grew 12 points over against Q1 of the same year, which places this sector at the front in this field. The moderate growth for this end user sector is also evident in the manufacturing number for SKU, which by Q2 was at the 50 level of reference, although it is expected that it reaches a 64.4 index during the third quarter, slightly above the industry as a whole by 2.6 points. 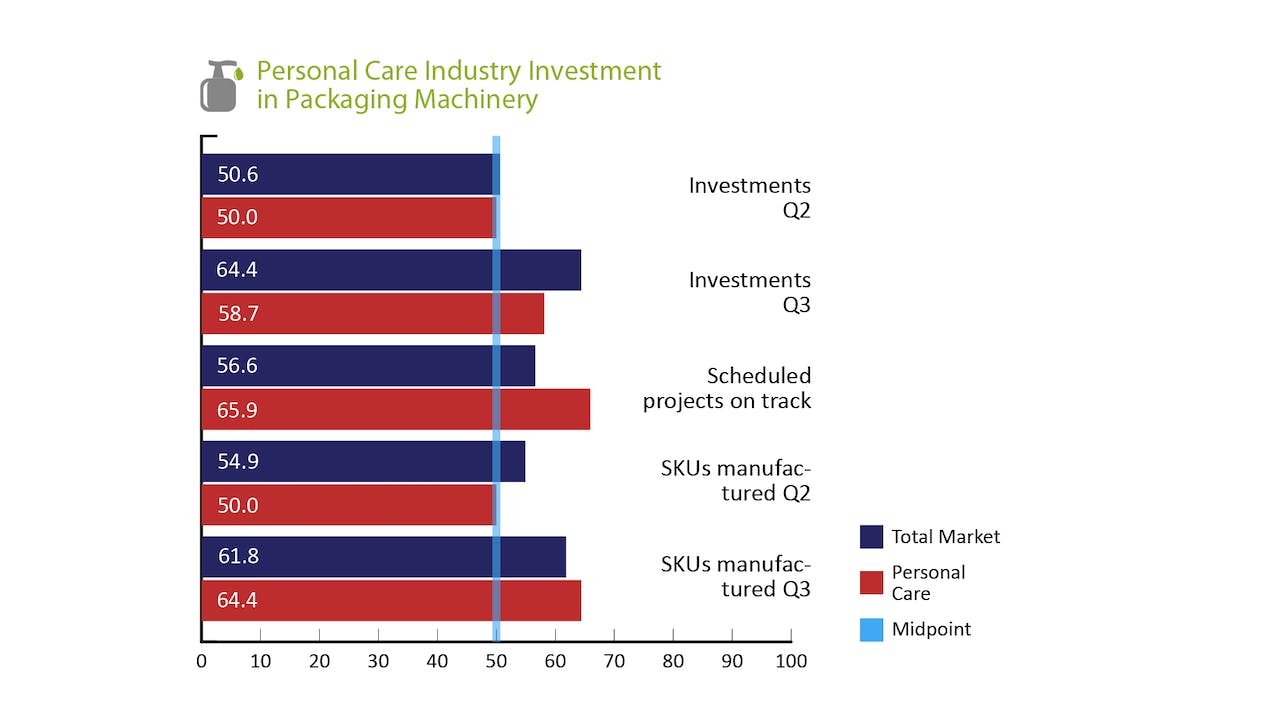 CPGs in the Personal Care industry are reporting no change for investments in Q2.PMMI Business Intelligence

For Mexican pharmaceutical & medical supplies manufacturers, the first half of the year has been a period of contraction in terms packaging machinery investments. With levels of 42.3 for the first trimester and 33.3 for the second quarter, that are way behind the industry’s total. The growth in investments forecasted for Q2 –to reach 63.5 points— was cut short nearly by half and estimates for the third trimester of 2021 are even lower than for the second quarter, scoring 8.8 below the market’s aggregate figure (See Graph 4).

Prescheduled ongoing projects are slightly less than those of the industry as a whole, the same as the number of manufactured SKU which barely surpassed the limit level (50) with 52.8, although remaining below the total of the industry. 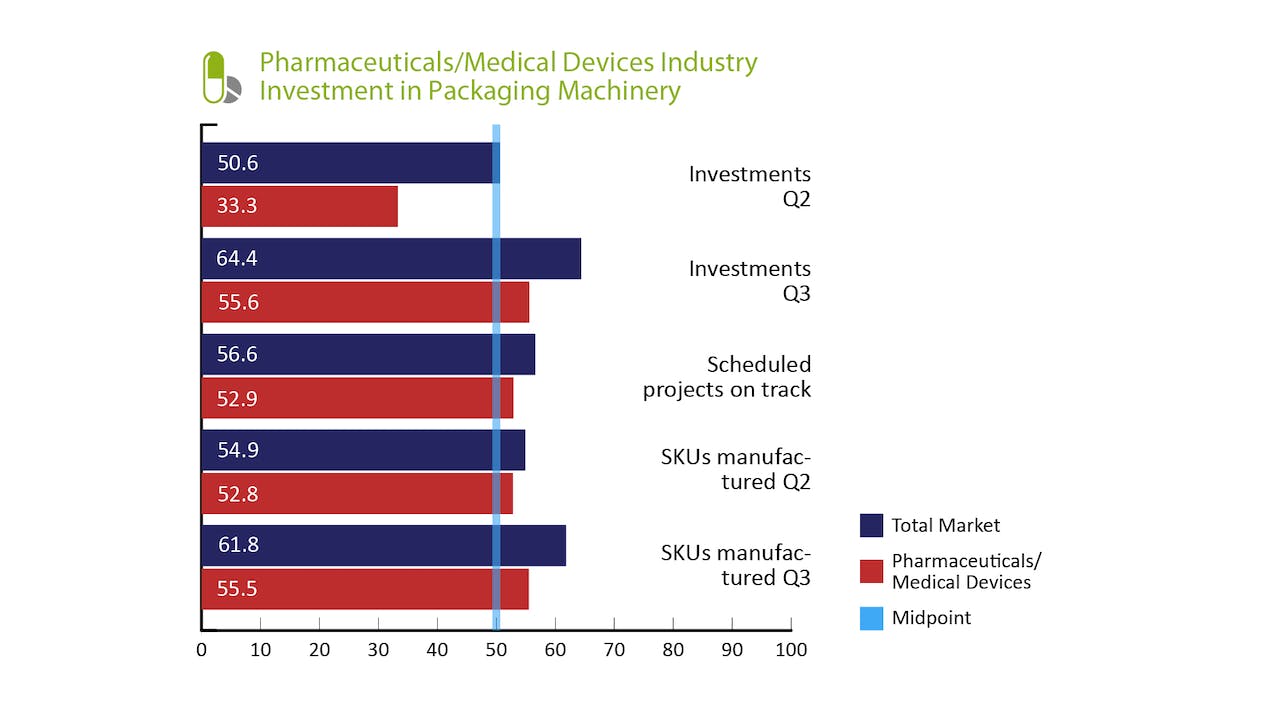 Other industries: At cruise speed

As part of our study targeted at packaging machinery end-users about investments, we also asked manufacturers of durable goods, industrial products, hardware, chemicals, and paper and printing goods; they were grouped under the “other industries” category. These companies displayed a very similar behavior in Q2 as in the first trimester, although there was a slight increase and the same is seen for their third quarter projections.

The 45 points packaging machinery investments index for the first quarter climbed to the 47.6 mark in Q2. Projections for the second trimester (60 points) also grew for Q3, reaching 62.3 points. The case of prescheduled ongoing projects is similar: it grew to 53.3 points vs 52.1 mark of the first trimester (See Graph 5).

In terms of manufactured SKU numbers, these other industries were closely below the level limit of 50 in Q2, although they showed an increase in comparison to first trimester of the year figures. However, Q3 projections were even lower than those included in the previous report and under the market’s total, still slightly smaller than Q1 estimates. 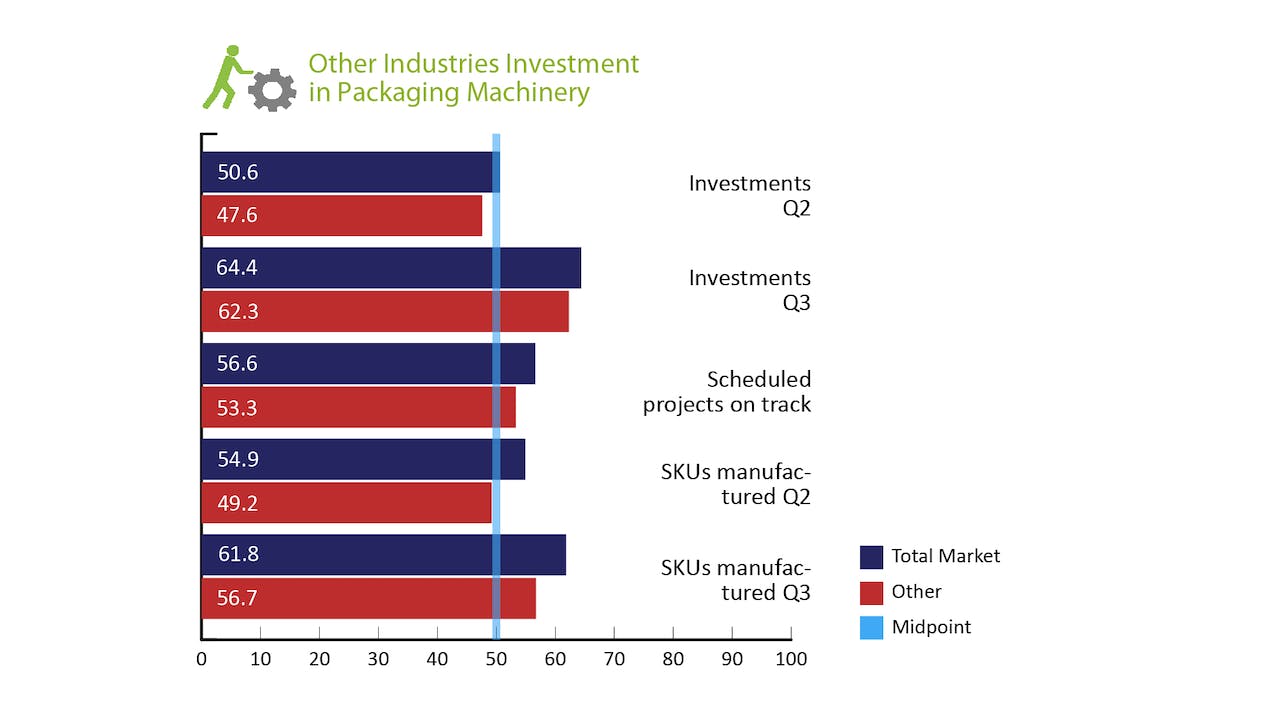 Other Industries are defined as respondents in the Durables/Industrial/Hardware, Chemicals, Paper and Printers industries.PMMI Business Intelligence

Good prospects for the second semester

Based on the analysis of the information gathered through our survey of top executives from the different sector´s packaging machinery end users, a general landscape can be drawn which reveals a climate of optimism for the third quarter of this year regarding prescheduled ongoing projects. This is in line with the advancements we see Mexico making towards going back to normal productive and consumption activities.

In all industrial sectors, the figures for prescheduled ongoing projects grew in Q3, while the spike in this index shown by the personal care products industry is remarkable: from a third place in Q2 (53.9), it climbed to the top of the podium in the third trimester with a 65.9 mark (See Graph 6). 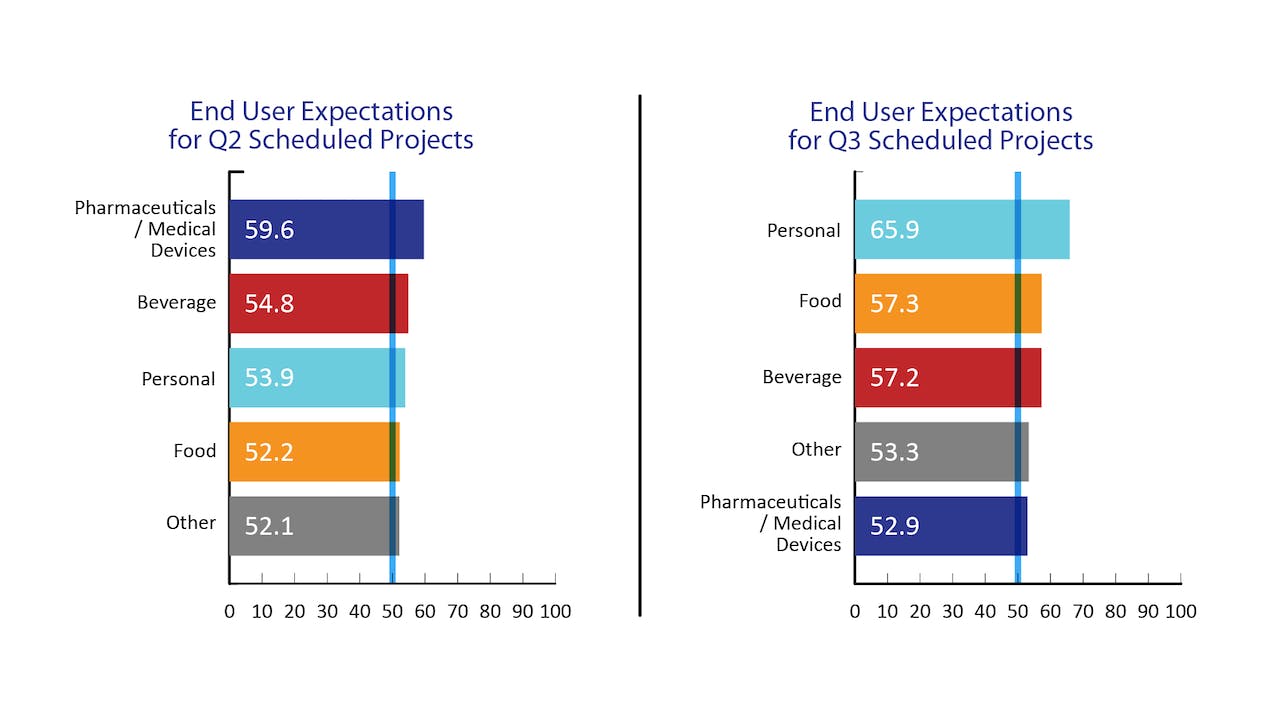 Live from Natural Products Expo West: An international trade expert discusses why you need to know your buyers, what you can ship to a sanctioned country, insurance for sea cargo, and more.
Keren Sookne
Mar 9th, 2022
More in Business intelligence

Looking for a primer on the cannabis market and how to start designing packaging for cannabis? Download this free PDF below.
Feb 11th, 2022