The safety technology for EtherCAT, FSoE, became a recommended National Standard (GB/T) in China on October 1, 2018. 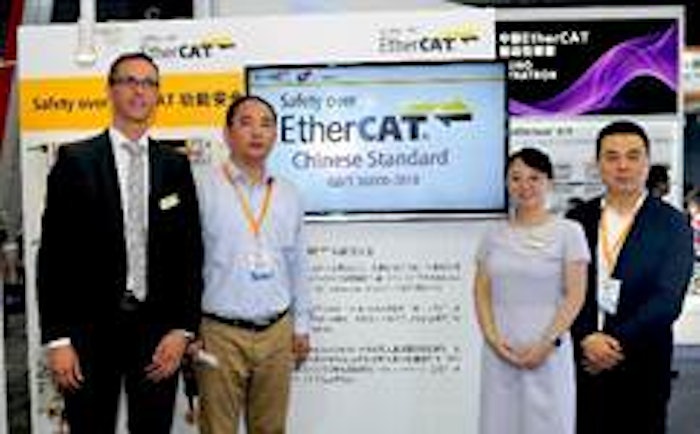 FSoE, which stands for Fail Safe over EtherCAT but is also known as Safety over EtherCAT, provides integrated functional safety for EtherCAT and other communication technologies. The Chinese National Standard will boost the wide acceptance of EtherCAT even further, as manufacturers, vendors and users can rely on this stable and accepted technology.

EtherCAT itself has been a Chinese recommended standard since 2014. With FSoE now also reaching this official status, end users, system integrators and device manufacturers alike have the reassurance that the entire EtherCAT technology ecosystem is fully accepted in China.This development will also further facilitate the implementation and use of Safety over EtherCAT in China and beyond.

“We will continue to educate the market and strengthen awareness about the importance of functional safety for operators, machines and factories,” said Beryl Fan, chief representative of the EtherCAT Technology Group (ETG) in China. “With FSoE technology, we can offer a flexible, user-friendly and cost-effective solution for the market, and the ETG office in China remains ready to provide support in this area.”

Dr. Guido Beckmann, chairman of the ETG Technical Committee, adds: “I am encouraged by the great interest in the important Safety over EtherCAT technology and in Functional Safety in general. These topics are clearly gaining in importance among users and machine builders in China and around the world.”

The FSoE GB/T Standard 36006-2018 was announced during the recent Industrial Automation Show in Shanghai. The standardization process within the Standardization Administration of China (SAC) committee SAC/TC124/SC4 was supported by Instrumentation Technology and Economy Institute (ITEI) and the Chinese ETG team.

ETG has also established an FSoE conformance test center in collaboration with TÜV SÜD China at Beihang University in Beijing to provide additional support for the technology as it continues to be implemented throughout China. ETG also held a Safety over EtherCAT seminar in Shanghai, which provided detailed information about the architecture, technology, implementation and user benefits of FSoE.

Both EtherCAT and FSoE are also international IEC standards, which automatically makes them nationally accepted standards in most countries.