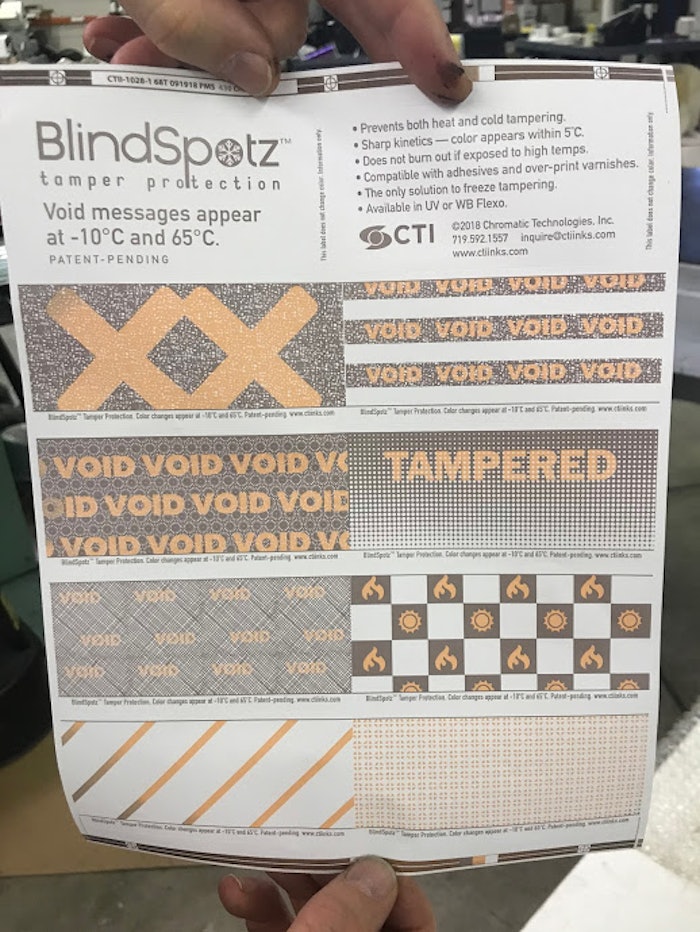 The use of extreme temperatures (especially sub-zero temperatures) to circumvent traditional security measures on packaging has increased substantially among criminals in recent years, with no effective deterrent until now.

To date, most tamper indicators only reveal heat tampering (such as using a heat gun to melt glue on packaging tape). BlindSpotz Tamper Freeze and Tamper Heat inks show color and messaging when thieves use heat OR cold to tamper with packages.

The long-time industry standard has been a “high-heat” tamper indicator that changes color, but now there’s a tool to fight bad actors who use cold spray, freezing or liquid nitrogen to (1) pull apart a money or document bag and (2) remove and replace an expired label or bypass security tape-treated, high-heat irreversible inks.

According to the company, criminals have figured out that the way to get around high-heat tampering indicators is to “go cold” by exposing packaging to very low temperatures. This can delaminate many adhesives without activating a tamper-heat indicator.

The Tamper Heat ink is said to offer the following advantages compared to existing high-heat tamper evident inks: (1) they maintain color if exposed to very high temperatures (greater than 100° C for instance), (2) Tamper Heat/Tamper Freeze technology activates within a 5° C window, (3) can be printed with adhesives and over-print varnishes and (4) will last much longer on the shelf than existing “heat-irreversible” systems, in both wet and printed states.