The packaging industry is moving toward design for recyclability, to continue protecting products while lowering greenhouse gas emissions and ensuring less plastic waste. 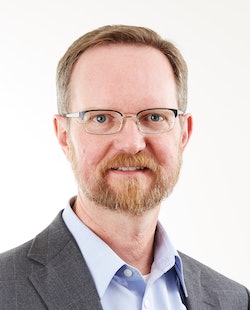 Many CPGs, packaging suppliers, non-profit organizations, and governments are working together to solve environmental issues through package design, operational changes, legislative action, and consumer education, and David Clark, Vice President of Sustainability at Amcor, discussed these issues at the PACK EXPO Las Vegas ‘PACK to the Future’ Stage audience on Tuesday.

Clark broke down the different areas of focus for this movement:

In 2015 it was discovered that most plastic ocean pollution came from countries that didn’t have well-developed waste management systems, where land-based waste was dumped or leaked into the environment. Based on that research, the New Plastics Economy Initiative was created by the Ellen MacArthur Foundation to find ways to move plastic packaging from a linear to a circular model, where it can be reused, recycled, or composted.

In 2018 a small number of companies, including Amcor, launched “The Pledge,” said Clark. In the same year the Ellen MacArthur Foundation launched the New Plastics Economy Global Commitment, and since then there's been a call for a UN treaty on plastic waste.

The Consumer Goods Forum and the Ellen MacArthur Foundation have had a “real change in what's happening with policy around recycling and waste management,” said Clark, based on position papers on extended producer responsibility that they released. The Consumer Goods Forum also launched ‘golden design’ rules, which are helping to mobilize the industry around developing more recyclable packaging.

Reducing Carbon Footprint and the Impact of Greenhouse Gasses

There are three scopes of carbon footprint, or greenhouse gas emissions:

1.    Fuel burned by a company's operations such as natural gas for heating, diesel oil or gasoline that's used in company owned vehicles, or forklifts etc.

2.     Emissions from a company’s purchased electricity that operations may use such as coal, natural gas, or a renewable source.

Clark said that most people focus on these two scopes when talking about reducing greenhouse gas emissions, but scope three is the bigger issue that needs to be considered, as typically 80% or more of the total emissions related to a product fall under this scope:

3.     The footprint of all raw materials that are used, and the footprint of other activities that the business causes to happen, such as the production of the materials itself, waste disposal, or contractor owned vehicles.

“It's important that we don't focus only on fuel use or electricity used by any individual operation, but what happens across the entire value chain, adding up those scope three emissions as well,” stressed Clark.

Clark points out that it is important to remember why we use packaging: To protect products from the point of manufacturer through complex distribution channels to retail, and then once purchased, to be safely stored until the product is used.

If packaging is not designed well, waste may result in any of those stages in the distribution channel because of spoilage or damage, and environmental impact - whether carbon or total waste - could be much higher than the waste that is caused by packaging itself. Over-designed packaging will also create excess packaging waste.

“In many cases,” said Clark, “the lowest carbon footprint and the lowest waste solutions occur at the same points. And over time, we're able to continue to lower that dotted green line and have even less environmental impact because of product innovations and new materials and better waste management technologies.”

There are three reasons more packaging is not being recycled today, said Clark. A need for recycling systems with better economics and quality is one, because the cost of collecting and sorting is often more than the value of the materials. Secondly, laminates or other materials that are not compatible or recyclable need to be redesigned or innovated “so that they don't end up in the waste stream.” And lastly, said Clark, “we need to be looking at reuse as well as recycling.”

To ensure packaging is designed to be recycled, the Consumer Goods Forum worked with recyclers, retailers, and manufacturers to create the ‘golden design’ rules to minimize plastic waste. There is also a European circular economy directive, which will require all packaging to be recyclable, reusable, or compostable by 2030.

“This,” said Clark, “is working to harmonize the product design and packaging design that's taking place in Europe with the recycling infrastructure that's either in place or will be put in place to ensure that high levels of recyclability can be achieved, and actual high levels of collection and recycling are achieved by 2030.”

“Ultimately,” he added, “we can get to a point where packaging is recycled and collected…we won't create the infrastructure, we won't create the markets, until the packaging exists, and people are still hesitant to design the packaging because it won't be collected and recycled today. So, we're trying to take the first step and move toward designing for the future of recycling. It's a bit like designing for the next generation of technology and mobile phones or televisions where the broadcast or the reception may not be available, but the hardware is being placed in the market today.”

“When we look around the world, one of the common elements of any good functioning recycling program is good government policy to support recycling, and also funding,” said Clark. Because the collection and sorting - especially for plastic packaging - typically costs more than the materials are worth in the commodities markets, funding is necessary to ensure that the packaging can be collected and recycled.

Extended Producer Responsibility systems are used globally, and are now starting to be implemented in the U.S.  With EPR, it is the producer's responsibility for a product, and that responsibility is extended to the post-consumer stage, usually through fees that are used to support the collection sorting and recycling of packaging. EPR fees are higher for packaging that is more difficult (or not possible) to recycle and offer incentives for products that are easier to recycle.

Clark said in these systems the cost per capita is typically around $12 to $30 per person, per year, spread over all the products that they're buying. That generates money that helps to fund recycling in those countries, resulting in a higher recovery rate compared to the United States or places that don't have EPR.

EPR legislation in the U.S. has passed in both Maine and Oregon at this time, and, said Clark, “If you're not engaged in this activity, and if your company has a stake in making better products and improving the recycling and collection of the products that you make, then this is something that you may want it to be paying attention to.”