As we progress into the new year, nervousness about the economy abounds. And it’s coming from a lot of fronts, including people in the packaging business. 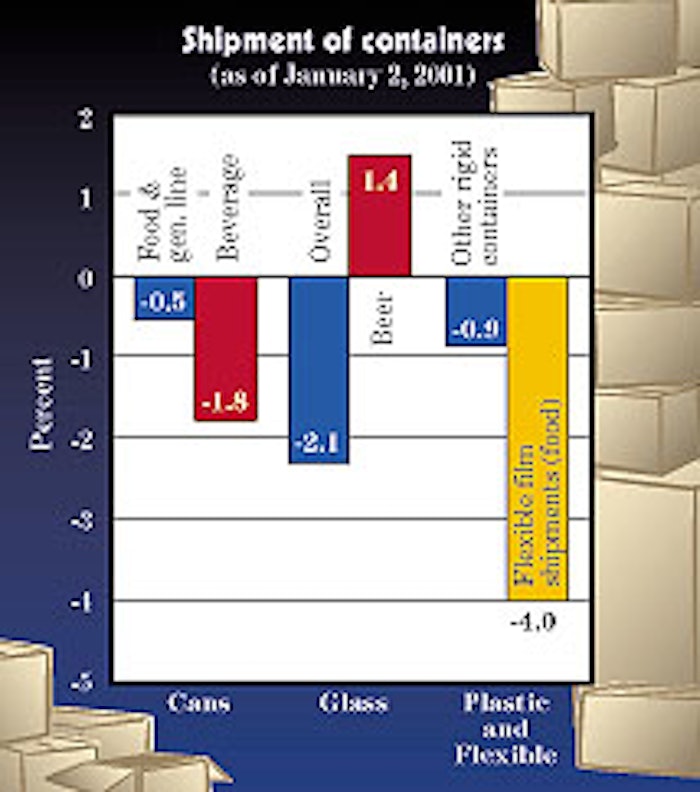 Some are using the “r” word (recession), while others anticipate a “hard landing” from the recent economic boom times. Of course, for many of the dot-commers, it’s a full-blown depression. But even at the most robust of companies, uncertainty can be felt. Alan Greenspan stepped in early in January with a bold monetary move; unfortunately, the markets responded only for a single day. By the end of that week, some were calling for another drop in the interest rates because the first half-point decline had already been factored into market prices. Beyond the pure good or bad economic theory, I sense that a lot of people seem to be trying to create a recession by always undervaluing any positive developments. It simply seems that a lot of people are trying to “talk” their way into an economic slowdown or a recession. And I think early January is the perfect time for it. Because it’s that time of year—and it’s especially true this year—when things get dull. I’d call it the “dog days of winter,” but my bulldog, Delilah, would be offended. Once the Holiday season is over, there’s hardly anything in the near future to lift the spirits. The lack of anticipation seems to make our spirit as cold as January in Chicago. If that’s chilling, what about February? My own concern for the first quarter and for the near-term has been, “How can the United States sustain the productivity increases it’s been enjoying?” Much of the increased productivity that the country has experienced during this economic boom has been attributed to more widespread use of the computer and the increased productivity it’s afforded workers. There’s a similar trend in packaging. Electronic controls, from PCs to PLCs, help plant people cut down on diagnostic time and reduce downtime to troubleshoot equipment. Simulation software allows packaging engineers to test a line for optimal conditions. And how much time and labor is being saved by electronic reordering, warehouse management systems and other programs? To a lesser extent—although for some who have used computers for a long while it’s a greater extent—another contributor has been the extra hours of work we’re getting out of workers, particularly salaried employees. I became worried when the major computer makers began to report sagging sales. Could it be that the business world had become saturated with computers? Could it mean that we were near to reaching the peak in productivity that could be specifically attributed to computerization? If so, perhaps productivity levels would begin to stagnate, adding costs that would drag down the corporate profits that had underpinned the economy in the last few years. I almost succumbed to the January doldrums. Then I came across a release from Northwest Analytical, a Portland, OR, maker of software for Statistical Process Control programs. While the copy discussed how difficult it can be to get all employees on board when converting to an SPC program, it may have hinted at one answer to future productivity gains. For example, most often, management is time-pressured. Thus, they’re not predisposed to use SPC unless the charts are easy to access and provide quick information or intelligence for decision-making, said Northwest Analytical. On the plant floor, NWA says the key is to get workers past any math or computer phobia before it derails the installation. One way is by adopting easy-to-use software. “The software should provide clear, high-quality graphics that allow a user to quickly and easily grasp the process situation, without having to do any programming,” according to NWA’s Jeffrey Cawley. “It should allow SPC managers to easily automate routine tasks. It should allow users to drill down into the data if desired, but should also allow analysis without needing to deal with the data.” The light that I’m seeing at the end of the economy tunnel is that even when our businesses become saturated with computers, we’ve just begun to tap their potential to help us improve productivity. The development of better programs and software (and better and cheaper hardware, too) will allow us to keep improving our productivity for a long time to come. Of course working a couple of extra evenings a week won’t hurt either.