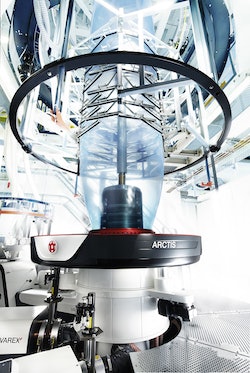 Polymer Packaging, Inc. has launched a new division, Polymer Film & Bag, Inc., which will feature the very latest in 3-layer co-extruded film for converter grade sheeting and custom bag applications. The new facility is expected to be operational in late November with a team of 20 employees.

“We’re so happy to join Polymer Film & Bag on their entry into producing blown films and establishing this new business unit. I’ve known Larry and Bill Lanham for over two decades and that we’re now partnering with them as their machinery supplier is a wonderful development,” says Andrew Wheeler, President of W&H in North America.

“In order to service the diverse needs of our customer base, we decided to install a very wide range of film and construction capabilities allowing future market needs to mandate what the expanded capabilities will be. W&H uniquely offered the best solution to accommodate this need today and into the future,” says Larry L. Lanham, CEO of Polymer Packaging.

Polymer Film & Bag will be located in an existing 100,000 sq ft section of the Polymer Packaging plant in Massillon, OH. This first phase extrusion section was set up and designed for film production to initially house up to six lines with room to expand to 18 lines.

“We’ve invested in our future by expanding with the latest in equipment and material technology to provide engineered film solutions that offer source reduction, increased throughput and improved film performance,” said Lanham.

The multi-layer films to be produced by Polymer Film & Bag will be stronger than conventional film, yet thinner as a result of both resin technology and superior gauge profile, which significantly reduces the consumption of raw materials during production.

Polymer Packaging, Inc., founded in 1986, has evolved into a state-of-the-art manufacturing packaging operation providing flexible packaging solutions for the food, industrial, medical and pharmaceutical packaging markets throughout the U.S. For more information call 800-260-1446 or visit the website.