In the 50 years that Alliance has been providing seafood solutions to the Commercial Fishing industry they’ve become very familiar with the extreme demands placed on those in this profession. The seafood banding machine was created to decrease the pain associated with manual banding, but these machines also increase efficiency and lower overhead costs in oyster and lobster processing.

In 2019, Alliance developed an iteration of the seafood banding machine to accommodate oyster banding. The machine was presented to several clients for testing within their HPP (High Pressure Processing) operations. Those who used the oyster banding machine found that it significantly increased efficiencies (which lowered overhead costs). These clients purchased the Oyster Banding Machines and have adopted them into their daily operations. Since then, Alliance has shipped the Oyster Banding Machine to facilities all over the world, and the reports from those companies are the same.

In 2017, a call to action was published in the study, “Musculoskeletal Disorders in Northeast Lobstermen” where researchers concluded that equipment to assist material handling should be a priority.

It was from that point that Alliance initially decided to focus its efforts on the development of a banding machine. After partnering with mechanical engineers, a machine was developed and tested in the most heavily fished areas of Canadian Lobster Fishing Districts LFA 33, 34, and 35, located around the southwestern shores of Nova Scotia. The machine was then left behind with several boat captains over a 30-day testing period. Martin Collins, Captain of a lobster fishing vessel in LFA 35, tested the bander on his vessel. According to Collins, “I normally rely on two guys to band the catches each season, but this time around they couldn’t make it. I had to hire a green bander at the last minute, who suffered from two torn rotator cuffs. To my surprise, this 55 year-old guy who couldn’t lift the traps, was able to process 15,000 lbs. of lobster on this machine without any issues what so ever. If it weren’t for this machine, I wouldn’t have made it through the season.”

Watch a demo of the Lobster Banding Machine here.

Request More Information
Fill out the form below to request more information about Seafood Banding Machine
Videos from Alliance Rubber Co.View all videos 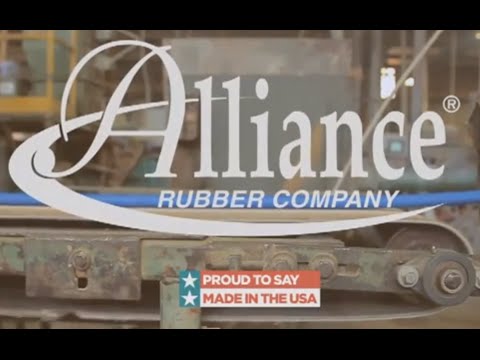 Alliance Rubber Co - Proud to Say Made In The USA

Alliance Rubber Co., a global supplier of rubber bands, office, and packaging supplies, was chosen as The Best Large Company to Work for by The Sentinel-Record’s Readers’ Choice Awards.
Alliance Rubber Co.
May 23rd, 2022

2021 marked a milestone anniversary for the Precision Automation® organization as it celebrated 75 years of business. Fred Rexon Sr. began the business by putting a lathe and a drill press in his garage, making parts for local companies.
Precision Automation® Company, Inc.
May 23rd, 2022

Newtec realizes the purchase of industrial weighing and sorting machinery for food packhouses is a high capital investment that needs to be carefully researched and considered.
Newtec
May 11th, 2022

The company received the award in the International Trade category.
Bradman Lake Inc.
May 11th, 2022