Robotization of the end-of-line packaging systems for Nexium has enabled AstraZeneca to maintain high production rates while accommodating flexible and varied product packaging requirements. AstraZeneca’s packaging facilities for blisters and wallets in Södertälje, Sweden have a total of nine robotized cells, featuring a mix of 16 robots from ABB Robotics and other suppliers. See how it works in this video.

Nexium, AstraZeneca’s blockbuster treatment for dyspepsia, peptic ulcers and various other gastric-acid related disorders, was the third largest selling drug in the world in 2005. It generated $5.7 billion in sales and helps maintain AstraZeneca’s position as one of the worlds leading pharmaceutical companies.

Nexium was developed as a result of the pending patent expiration of Losec, one of the most successful drugs of all time. AstraZeneca understood that to compete once patents expire, they have to compete commercially. This often means removing costs from the manufacturing process to compete on price and quality.

Manufacturing processes are largely governed by the laws of chemistry and hence, present few opportunities for savings achieved from efficiency or efficacy improvements. At the end of the line, however, there remains scope for investment that can yield dividends; not just in economies and cost reductions, but also to introduce commercial differentiators such as pack sizes, types and styles.

Nexium is produced in half a dozen countries worldwide. While the millions of Nexium tablets that are sold daily bring relief to the ailing stomachs of the world, packaging the tablets for the marketplace has caused its fair share of headaches. For a start, the tablets themselves are moisture sensitive, so they must be wrapped in a sealed foil blister pack. However, the blisters themselves are quite large, and would get damaged in a pockets or handbags. To overcome this problem, a special design was produced whereby the pack folds over on itself, with the blisters interlocking, while the outside is protected by a wrap-around card sleeve. The end result is looks just like a wallet and protects the tablets while they are being carried.

The attraction of a computerized, robotized packaging line became apparent by the sheer complexity of the packaging line. The number of tablets per wallet varies according to the market. Some carry as few as three for sampling purposes; others carry up to 14. The wallets themselves must be packed into shipping cases, and these must then be packed onto pallets. Some wallets are destined for re-packaging in other markets, so they are packed into special cartons and then palleted. The end result means there are dozens of combinations of blister packs, wallets and shipping cases. Further complicated by the fact that each one has to be identified with its own unique bar code. Human processing of the complex variety of pack combinations would slow production or necessitate the opening of extra lines. Hence, there is the need for robots.

The AstraZeneca plant at Södertälje, south of Stockholm, features four dedicated Nexium lines supplied with turnkey ABB Robotics pack-handling solutions. The basic pharmaceutical ingredients are mixed elsewhere at the site and then formed into tablets. These are fed into the foiling machine and emerge in series of foiled blister packs. The packs are glued, the paper wallet is wrapped around the blister, and a sealing label is attached. A batch number is printed on each pack and checked by vision cameras. The completed packs are then moved forward into the robot cells, where they are packed into either shipping cases or cartons, depending on their market destination.

Each robot cell consists of two robots: a smaller IRB140 and a larger IRB 4400. The IRB 4400 assembles the cardboard shipping cases, moving them for taping, weighing and printing with a serial number, and then places them on pallets. At around 100 cartons, the pallet is automatically replaced, using an automatic forklift truck.

Each Nexium line can now produce up to 10,000 wallets every hour with minimum human intervention, and the end-packing requirement can be altered rapidly from a central computer.

“Our key requirement for each automated line was to make it as digital as possible,” says Lars Siggelin, senior project manager of AstraZeneca’s Global technical Services. “Before this automated handling, there was a time consuming challenge in switching between the shipping cases. With different numbers of wallets in the cartons, that meant different sizes of shipping cases and having to change the handling parts. This solution makes the changeover quickly and smoothly, with no change parts. You just key in the new data and away it goes.”

Other automated refinements supplied as part of the solution also makes a change to the level of the lines efficiency. Labeling of cartons was once done by hand with preprinted labels. Now an inkjet printer prints directly onto the case. A bar code is part of this information, and a reader checks this. If the information is correct, it is recorded and stored in a central data system for batch information. If there is an irregularity, the robot will remove the relevant case from the line.

“Profitability is a key part of any business, but particularly so in large industries that have demanding investors,” says Siggelin. “Making production systems efficient is therefore a vital part of what we do … and it was while we were looking at the Nexium lines that we realized that the existing end-of-line packaging systems were a mess – too complicated, too many parts, too much setup required. We needed an effective solution – rather like our patients need our products.” 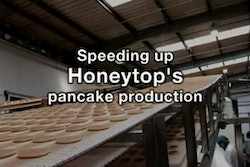 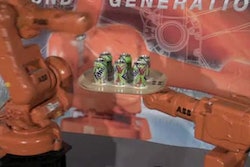