When robots take over: A worker's tale

Bonnie Dean works in the packaging operations at Gray and Co., Hart, MI, makers of Queen Anne chocolate-covered cherries. She was one of 10 employees whose duties changed dramatically in early 2001 when the company installed robotic case packers. 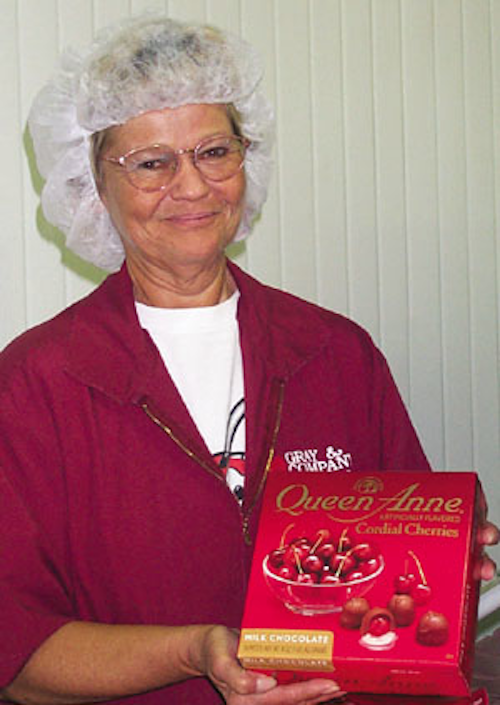 PW: How did you and others feel before the robots were installed?

Dean: We first heard rumors about the robots about a year before they were started up. It was a big rumor for a while. I was really worried as to what was going to happen to me. I liked my job, and was concerned about losing it. Some around here said the robotic improvements would never happen and they would never work.

PW: What were your duties before the upgrades?

Dean: I assembled the cases, loaded them with six cartons of cordials at a time, and added a divider. I was doing this full time for nine years.

PW: How did you feel about those duties?

Dean: Although I rather miss picking up and inspecting the cartons as I had done before, I didn’t really enjoy putting them into the cases. Sometimes my arms got tired—it made for some really long days.

PW: What are your new tasks? And how do you feel about them?

Dean: I take care of the case former, the robotic case loader, the case sealer, and keep the line supplied with cases, dividers, and glue. It’s a bigger, more exciting challenge. Before, I had someone to talk to since there was another lady right across from me. Now, I’m mostly by myself, but at times I enjoy that, too.

PW: How have things worked out?

Dean: I was given the opportunity to learn something that was new for me and for the company. It’s going really well. Every day we learn something new. My coworkers generally have the same feelings, though there’s always those that will grumble. The consensus is that we’ve settled into our new jobs.

PW: What lessons have you learned through this?

Dean: Automation is for the better, and these improvements were needed. I’ve also learned not to be too critical or judgmental. You have to try something before you can judge it. Robots take jobs away, but they also create new jobs. The robots also make it a safer workplace for the employees. We’ve had the robots for more than a year now, yet it’s still exciting to watch them in action. —RL

QC Conveyors introduces the Flextrac Series of modular plastic chain conveyors designed for packaging, automation, and part handling applications. They can handle loads up to 850 lb with speeds up to 160 fpm.
QC Conveyors
Feb 7th, 2020

These configurations increase the scope of products and pack patterns that the CEL5 series can handle.
ESS Technologies
Jan 31st, 2020

Get loads together, then keep them together, with a systematic approach to stretch wrapping.
Sterling Anthony
Jan 31st, 2020

Qimarox introduces the Prorunner mk10 modular pallet lift for pallets up to 2000 kg. It can transport up to 60 pallets/hr.
Qimarox
Jan 28th, 2020

Ranpak announces the North American launch of the FillPak Trident, a packaging solution for medium and high volume shippers such as E-commerce hubs and fulfillment and distribution centers.
Ranpak Corp.
Dec 20th, 2019

To maximize how much product could fit on a truck for shipment, Canadian tomato farm Cecelia Acres wanted to stack its pallets higher than its employees could comfortably handle. A Kawasaki CP180L robot integrated by Caxton Mark did that and more.
Aaron Hand
Dec 19th, 2019

Inconsistently sized blisters of sliced cheese present a challenge when it comes to placing the same number of packs in a carton. New robotic system provides the solution.
Anne Marie Mohan
Nov 2nd, 2019

EndFlex’s Z.ZAG palletizer automatically uses vacuum generators to pick up cases one at a time and place them on a pallet from above. Its suction capacity is capable of lifting 40-lb boxes at speeds up to 360 boxes/hr.
EndFlex LLC
Oct 23rd, 2019

Plant-based Truly Green Film from Polypack is derived 100% from sugar cane, and attendant machines can run it without a hitch. Applications include retail and distribution packs.
Matt Reynolds
Sep 27th, 2019

Streamlining the loading process with easier case loading via a Modular Expandable Magazine increases the capacity of case blanks in the machine.
Matt Reynolds
Sep 24th, 2019

Modularity in machine design is a theme that frequently echoes when PACK EXPO rolls around, and PACK EXPO Las Vegas 2019 was no exception.
Pat Reynolds
Sep 24th, 2019