In England, the Tuxford and Tebbutt brand of the country’s potent white and blue Stilton cheeses has moved from overwraps to a new wedge-shaped thermoform from Anson Packaging (Cambridgeshire, England).

That’s sealed by a Model PA182 heat-sealing system from Packaging Automation (Knutsford, Cheshire, England). The machine, says Simon Proctor, production manager for Glanbia, plc., the owner of the brands, is primarily used for short batch runs. It operates at a maximum speed of 15 cycles/min or 60 packs/min in the four-up mode. The machine incorporates a rotary table that permits loading of four trays while four filled trays are being sealed with lidstock that can be reclosed. Key to the development is the clamshell of polyvinyl chloride, which prevents the cheese odors from leaving the pack. “Use of the machine is increasing as sales of the new packs take off,” says Proctor. “We are now talking to the company about purchasing an in-line automatic sealer.” The Iceland chain of stores is the first to take on the new pack of Stilton, and other store chains are expected to follow. —AO 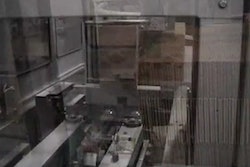 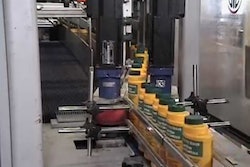 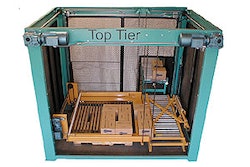