Crashing pixels rather than steel

What if packaging machinery OEMs could design new machines or make modifications to existing machines and actually run those machines virtually before bending any metal?

The transition from mechanically linked cams and shafts to servo-based packaging machinery that has unfolded over the past 20 years or so has brought countless benefits to machine builders and, more important at the end of the day, machine buyers. More than anything else, this shift has brought a level of versatility and flexibility that could never have been achieved back in the days of mechanical linkages.

But the demands that drove this transition—SKU proliferation, multiplying number of retail channels, customization of packaging based on specific demographic characteristics—have continued to intensify, to the point where some packaging machinery builders find themselves in need of a next big thing if they hope to keep pace. At WestRock Co., the next big thing is using model-based systems engineering to decrease time to market in designing and building its packaging machines. The two key solution providers pitching in were Dassault Systèmes and Bosch Rexroth.

WestRock is the Norcross, GA-based firm that emerged from the July 2015 combination of MeadWestvaco and Rock-Tenn. It’s one of the world’s largest paper and packaging companies, having $14 billion in annual revenue and some 39,000 employees in 30 countries. It’s also the only North American company in the paper packaging industry with an in-house machinery manufacturing and service division that designs and manufactures a complete line of secondary packaging equipment, primarily multipacking and case packing equipment. More than 80 standard and customized configurations are offered, some highly automated and others semi-automatic.

“We were as advanced as anyone in the business when it came to capitalizing on what servo drives and motors let you do,” says John Perkins, VP Global Systems at WestRock. “But as package format varieties continued to increase in number, our machine designers reached a point where it became ever more difficult to envision and account for all the formats involved. What we needed was a way of making it okay for our machine designers to make a mistake virtually rather than physically. This led us to start working with Bosch Rexroth and Dassault Systèmes towards the goal of simulating machines running all these various configurations so that we could see where problems would be on a CAD station rather than build the machine and have it crash physically on our plant floor. In addition to wanting to predict the mechanical interferences that might occur we also wanted to go a step deeper and ask how do you size what drives the machine? How do you make sure the servo motors, the drives, the gear boxes, and all the other parts that are being actuated can work within this envelope and run reliably and not fail?”

Model-based systems engineering
What the firm needed was model-based systems engineering—where packaging machinery, among other things, can be designed and built virtually rather than physically thanks to open and nonproprietary simulation software that makes it easy for multiple stakeholders to collaborate in modelling projects. Fortunately for them, Bosch Rexroth and Dassault Systèmes were already in conversations about how this kind of virtual machine design might be accomplished. At the center of their work was a programming language called Modelica, an object-oriented modeling language for component-oriented modeling of complex systems containing mechanical, electrical, electronic, thermal, control, or process-oriented subcomponents. Dassault Systèmes’ Issam Belhaj, World Wide Technical Manager for Industrial Equipment, describes how WestRock, Dassault Systèmes, and Bosch Rexroth became the legs of a three-legged machine-building stool.

“As of 2015 WestRock was a buyer of Bosch Rexroth controls components—servo drives, servo motors, controllers, and so on. Also by that time, quite independently Bosch Rexroth and Dassault Systèmes, a leading supplier of modeling software and CAD solutions, had been exploring how virtual machine design might be done through Modelica simulation programming language. Bosch Rexroth had already developed their own libraries for their range of products, and they were able to connect their controllers to Modelica through an IP address. This dovetailed nicely with our approach, which depends on being able to connect hardware to our software. When we and Bosch Rexroth demonstrated some of our early joint efforts at a Modelica conference, that’s when WestRock picked up on it. So by the end of 2015, the three of us were locked in on a goal of virtual machine design and commissioning.

“Bosch Rexroth was, and probably still is, ahead of the pack when it comes to Modelica, so that made them a good partner for us. They have been able to provide the actual predictive curves of their motors and drives. So when we plug that into a simulation, we’re not just looking at a theoretical. If I need X amount of torque I can actually take the Rexroth motor that’s been selected and the Rexroth drive running that motor and I can put the specific profiles of how those devices work in practical application and put those profiles into the simulation.”

Bosch Rexroth’s Open Core Engineering approach also makes them a good strategic partner for Dassault Systèmes, adds Belhaj. (For more on Open Core Engineering, see pwgo.to/2638) With the Open Core Interface, Rexroth provides a software interface that permits enhanced access to the control core, offers numerous programming languages, and allows the integration of smart devices into automation systems. Open Core Engineering brings together the previously separate worlds of the PLC and IT automation as a broad portfolio of software tools, function toolkits, open standards, and Open Core Interface. It addresses the complete development cycle of a machine, from design to implementation to production.

“It means we can just drag and drop a Rexroth component, a drive for example, inside the Modelica side of the platform and we are automatically connected to the real hardware,” says Belhaj. “Because inside the Open Core Engineering you already have all the IT communications in place.”

Modelica’s key role
Bosch Rexroth’s Scott Hibbard, Vice President of Technology, Industrial Applications, says that both Rexroth and Dassault Systèmes took full advantage of the way that Modelica facilitates collaboration among partners. “Modelica is a sort of programming language, though it would be more correct to call it a ‘modelling language,’ says Hibbard. “It’s specifically designed for the purpose of modelling mechanical and electrical systems. It provides a structure to define all the electromechanical characteristics of a device, like a servo for example, in a language that can be read from or written to by a number of products that support Modelica. Dassault Systèmes 3DS EXPERIENCE Platform has a Modelica front-end so it can read/write Modelica-compatible code. Bosch Rexroth has taken all the performance characteristics of our drives and motors and programmed them in Modelica, which Dassault Systèmes’ 3DS EXPERIENCE Platform can read. But even neater is we took it one step further and made the control itself Modelica-compatible, using our Open Core Interface. This allows the control to switch from ‘real-world’—looking for switch inputs, commanding real servo drives, etc.—and route all of that to a virtual machine that supports Modelica. The virtual machine is the CAD Model written in Dassault Systèmes’ CATIA CAD program. So the ‘real’ program is running in the Bosch Rexroth motion control, but instead of interfacing with the real world, it routes its input and output to a network connection to Dassault Systèmes’ 3DS EXPERIENCE Platform, which—thanks to the close Modelica integration—behaves just as the real machine. This allows not just proving out the dynamics of the motors and drives, but proving out the whole system, including motion program, inputs and outputs, etc.”

So what WestRock is able to do is design an entire machine in the Dassault Systèmes simulation software. But it’s a virtual machine, says WestRock’s Perkins. “We can run the simulations to make sure we aren’t going to crash parts, to make sure components are sized properly,” says Perkins. “And it’s all done electronically, in the simulation, before we ever build the machine. What a difference it makes. Instead of seeing, after the fact, that we have a problem with a machine, we can determine if there is a problem in our virtual machine and correct it before building a real machine.”

Hibbard emphasizes how important it is to recognize that the model being created in Dassault Systèmes’ 3DS and in Bosch Rexroth’s control is the same set of CAD drawings and the same machine program that will be used to build and run the machine. “One of the important aspects of this breakthrough is that the real machine design is being used in the simulation. Many machine modelling attempts have been scuttled because of overwhelming double work, where you design a virtual model, you then see that it works, and you then design a real machine. By using the actual CAD file, the actual control program and all, you eliminate this double work. That’s terribly important to point out.”

What WestRock has done is move from a machine design process that was sequential in nature to one that is a coordinated collaboration. In the past, Mechanical Engineering would build what appeared to be required. They would then pass it off to Electrical Engineering for wiring. Finally, it would go to Software Engineering for programming. This siloed and sequential process was inherently inefficient. Now in its place is a process that is simultaneous and collaborative across multiple dimensions. All three engineering groups work together to harmonize the design of the machine.

“Each of the three engineering groups feeds into the Modelica simulation program the behavior of the components they are responsible for putting into the machine being designed,” says Belhaj. “So as the project proceeds, you see immediately the impact of all three disciplines—mechanical, electrical, software—on the machine being built.”

“It even extends out beyond the packaging machine itself to include the paperboard multipack that runs on the machine,” says Perkins. “Remember, these are high-speed machines. Understanding virtually how that paperboard material is going to behave is critical.”

This ability to encompass the entire WestRock value chain is important, says Dassault Systèmes’ Belhaj. “From the design of the paperboard secondary packaging to the transport of primary packages in that secondary packaging all the way to the shopper experience in the store, we simulate the entire process,” says Belhaj. “We don’t see any competitive approaches that are comprehensive in this way. They tend to be siloed, where one supplier will simulate package design, another machine design, another distribution and transport realities, and so on. We do all of this inside the same platform based on a single data base. It means our customers don’t have to build again and again in different softwares and use interfaces between them.”

Perkins likes the way that it frees up WestRock’s machine designers. “It’s a fantastic tool that lets them ensure the design they’re producing is going to be fit for purpose,” he says.

Bosch Rexroth’s Hibbard sums it up this way. “It’s a lot better to be crashing pixels than crashing metal.” 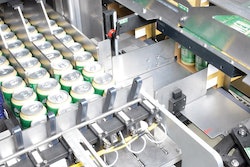 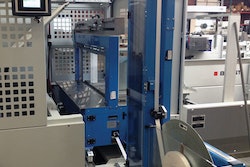