At Weinbergmaier GmbH in Vienna, Sissi and Franz—as their human operators have quaintly named the two Stäubli robots—pack high-quality strudel dough in perfect synchronization within a cycle time of 1.5 sec.

For even the most gifted amateur baker, pulling strudel dough is a challenge. The delicate dough must be thoroughly kneaded and stretched out as thin as possible, preferably so thin that light shines through. Anyone who masters the intricacies of this process earns the reward of tasting the filling in all its glory, because strudel has a far lower dough content than even a puff pastry.

The earliest known strudel recipe dates back to 1696 and originated in Vienna, Austria. Here, in the “pastry capital of the world,” the 22nd district, to be precise, a company has been manufacturing strudel dough on an industrial scale for the past half century. Weinbergmaier GmbH, acquired by the Vivatis/Raiffeisen Group in 2018, produces the Toni Kaiser brand of strudel dough on three production lines to the highest standards and in large volumes.

Shares Factory Manager Peter Baumüller, “We could completely fill a football field with a single-day’s production of our Viennese strudel dough, and our annual production, laid out in a row, would stretch 800 kilometers.” That’s the equivalent to the distance from Vienna to Frankfort, or almost to Florence.

Because the wafer-thin product must not be allowed to tear, the mechanical pulling of the dough places very high demands on the machinery involved. The highly specialized production lines have been in operation for around 50 years and are serviced with great dedication by the maintenance team. “These production lines deliver strudel dough of the best confectionery quality,” says Baumüller. “There is no way we could obtain machines of such a solid design today. That’s why we look after them like they’re ‘the apple of our eye.’”

At Weinbergmaier, however, trust in the tried-and-true doesn’t mean innovation falls by the wayside. On the contrary, the company recently expanded its production line for the wide strudel dough it supplies to the catering industry—brand name Weiner Strudelteig—adding a final packaging station configured around two Stäubli robots from the new TX2 series of six-axis industrial robots.

The process begins when the wrapped pastries emerge from a cooler at a temperature of 43°F and arrive at the carton-packing station, where they are correctly aligned on a conveyor belt and are carried to a point within reach of Sissi. The TX2-60 picks up four film-wrapped units at a time with its shovel-shaped gripper.

Meanwhile, Franz is busy preparing the carton. The TX2-60L, slightly larger than Sissi and with a longer arm, uses a vacuum gripper to remove a carton blank from a stack, swiftly guide it along four adhesive-dispensing nozzles, and press it into a negative mold. The carton is now ready to be filled.

While Franz prepares the carton for Sissi, it is her job to carefully insert the four packs she’s holding into the box. The TX2-60 has to be highly dynamic, but at the same time handle the product with care. Says Stäubli, Sissi has mastered the art with such perfection that any risk of damage to the delicate confectionery is eliminated. Finally, a tamper-evident seal is applied to the carton, and an inkjet print head marks the box with a batch number and production date. The filled and sealed carton is carried on a conveyor belt to the palletizing station.

Sissi and Franz usually work two shifts in the summer, which is peak apple strudel season, and sometimes they even work around the clock. And they do so at a phenomenal pace. Says Ayhan Celik, Head of Workshop Technology at Weinbergmaier, “By optimizing the final packaging line, we have succeeded in significantly shortening the cycle time. We have achieved this first and foremost because Sissi can pick and place all four packs at once. Both robots run at 80% to 90% of their maximum speed and can outpace the upstream production line if needed.”

For Vienna-based automation specialist Christian Piras Ltd., a huge challenge arose at the project planning stage for the system, namely the extremely limited space available. “For a long time, there was a question mark over the feasibility of the packaging line,” says Celik. “At first, it looked as if the proposed footprint would simply not be adequate. It was only by mounting the robots on the ceiling and dispensing with a protective barrier that we were eventually able to realize the system.”

The new Stäubli TX2 robot series coupled with the Stäubli CS9 robot controller helped make the enclosure-free robot cell possible. The robots comply with the strict requirements of The International Electrotechnical Commission’s (IEC) SIL3-PLe safety category, and to ensure maximum safety, every movement of the robots is monitored by sensors.

The six-axis machines are equipped with six digital safety encoders and an integrated safety board. The extensive safety precautions include the Safe Tool and Safe Zone functions, which allow a specific area to be precisely defined and continuously monitored. If an obstacle is detected within the defined safety zone, the robot automatically comes to a full stop. This innovation allows the packaging line to be operated without a safety barrier.

Peter Baumüller points to a second important aspect in project planning and robot selection: “Compared with other makes, Stäubli robots offer a higher standard of hygiene because of their encapsulated housing, streamlined contours, and internal cabling.”

The robot controllers are connected to higher-level Beckhoff controllers via Ethercat, a concept with which Weinbergmaier has already had positive experiences. “The robots are exceptionally fast and reliable, plus their hygienic design makes them a top choice in the food industry,” Baumüller explains. The work the robots do ensures that Weinbergmaier delicacies from Vienna will continue to be available on-demand and in sufficient quantities for gourmets all over the world. 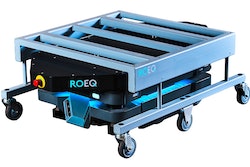 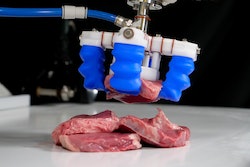