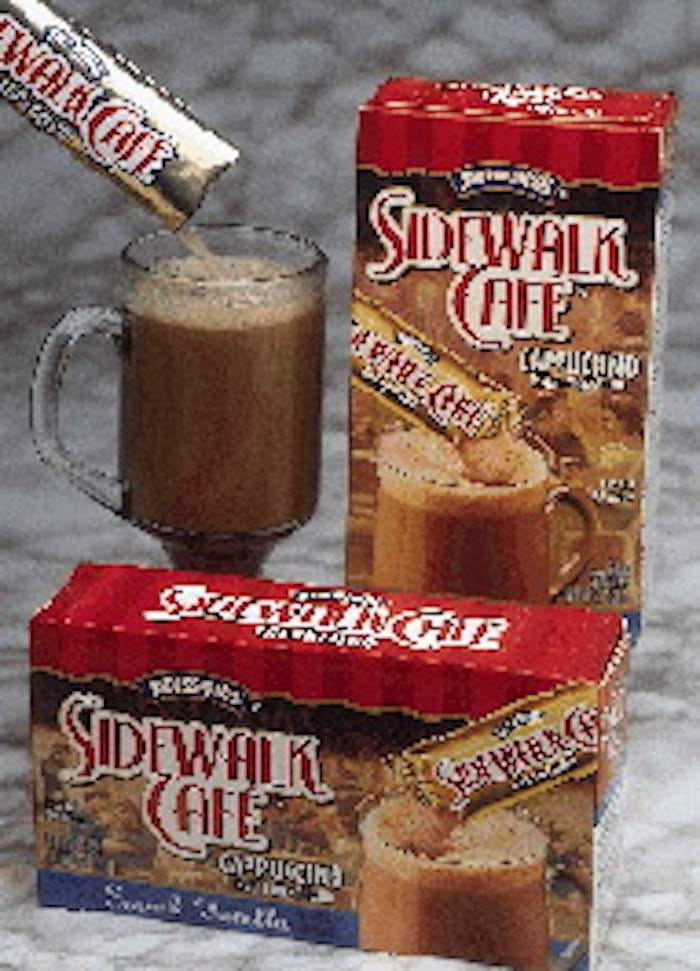 The test is further evidence of growing interest in the Slim Stick, which has been sold at retail recently for powdered products such as coffee, cappuccino and baby formula (see Packaging World, July '98, p. 2 or packworld.com/go/capcoolers).

Hunt-Wesson enlisted The Power Group (St. Charles, IL) to contract package Sidewalk Caf/. The Power Group and T.H.E.M. of New Jersey (Mt. Laurel, NJ) formed an alliance late last year to speed introductions of the Slim Stick to the market. T.H.E.M. is a distributor of the Japanese-based Sanko packaging equipment used by Power to form, fill and seal the Slim Sticks.

Six sticks are manually packed into an attractive paperboard carton supplied by Smurfit-Stone Container Corp. (St. Louis, MO). The 18-pt solid bleached sulfate carton is offset-printed in six colors and is designed with a vertical graphic on one main panel and a horizontal image on the other, offering Target the choice of retailing the carton either on its side or end.

"The Slim Stick is easy and convenient for consumers to use, and it's unique for us," says Carpenter. "We feel that packaging makes a big difference in consumer perception. So far, the response has been very favorable from Target, whom we've conducted test markets with in the past."

The six-pack retails for about $2.69. Carpenter says Hunt-Wesson will evaluate its success later this year to determine if it should be launched on a wider scale.