To increase throughput of its single-head plastic bottle leak-testing machine, ALPS dumped a proprietary, embedded circuit board in favor of commercial, off-the-shelf brick PLC from Omron.

“We ran into an obsolescence issue on the previous control system that we used for what we call our ‘linear machines’: single station leak testers,” says Scott Heins, director of sales and marketing at ALPS. “We had to decide on a new controls platform very quickly. We chose an Omron PLC to control the entire leak test and the machine’s operation. With the prior design, we had used proprietary circuit boards, an embedded system.”

According to Eric Updike, account manager at Omron Industrial Automation, demand for these linear machines had grown in the wake of the recent economic downturn. “With the economy down in 2008 and 2009, a lot of blow molders found the lower price of single station leak testers attractive,” he says. “There was a market for ALPS to redesign this machine and get a low-priced, highly efficient one to market quickly to meet the spike in demand.”

Before the prototype was even finished, ALPS sold over 40 of the redesigned machines. Using a new embedded board design would have slowed their ability to meet this volume.

According to Heins, key selection criteria included that the PLC had to be fast, reasonably priced, and have a brand name that their customers would accept. Omron met all the requirements. “We were expecting developments to be quicker and more efficient with a PLC platform, as far as evolving the control system,” says Heins. “This proved to be the case.”

As part of the new design, ALPS completely revamped the user interface to an icon-based menu structure in the Omron NS5 HMI. The new screens were in color; the old ones were black and white. “These changes were well-received by our customers,” says Heins. “The market saw the new design as a real advance.”

According to Updike, ALPS’ technical personnel were genuinely surprised at what the Omron PLC could do. Extremely fast and demanding analog scanning was necessary for the leak sensor. The machine had to trend the analog input from the transducer over the test every millisecond. No other readily available brick PLC with built-in analog I/O had a fast enough processor and scan time to accomplish 1 millisecond analog update until the Omron CP1H was tested.

The engineers were highly skeptical at first. “They do a lot of embedded, custom PC board development for many of their other leak testing machines, and found it hard to believe that a competitively priced PLC could do what needed to be done,” says Updike.

Personnel from ALPS’ parent company attended early meetings between ALPS and Omron Industrial Automation, and one of their computer programmers made the statement that there was “no way this inexpensive little brick PLC could handle a 1 millisecond hardware interrupt for analog input.” ALPS was delighted that this assertion proved wrong, and that the off-the-shelf Omron solution could meet their technical requirements.

“Very few PLCs in the reasonable cost realm are as fast as the Omron CP1H,” says Heins. “Usually you would have to go to a much more expensive PLC to get this kind of processing power. This is a fairly recent advancement, and it is only this kind of product line that empowered us to use a PLC for this leak testing operation.”

Omron products on the new versions of the RS and SS linear bottle leak testers included:

“This has been a really good platform for us to grow our sales on this type of machine,” says Heins. “There is strong acceptance in the marketplace for using a PLC for this function, and there is also very good acceptance of the Omron brand name.”

According to Heins, ALPS was impressed with how Omron and its distributor (Eden Prairie, Minn.-based Braas Company) quickly understood their needs and provided a solution that made sense—at a price point they found fair and in a timeframe that allowed them to go to market quickly. “So we believe we have established a good rapport with ALPS, one that can be leveraged as they continue to evolve their product line,” says Updike.

Currently plans are underway for a larger PLC-based tester, which will test multiple PET containers simultaneously. 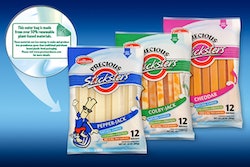 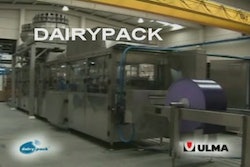 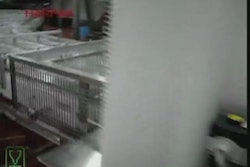 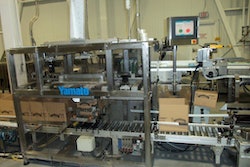