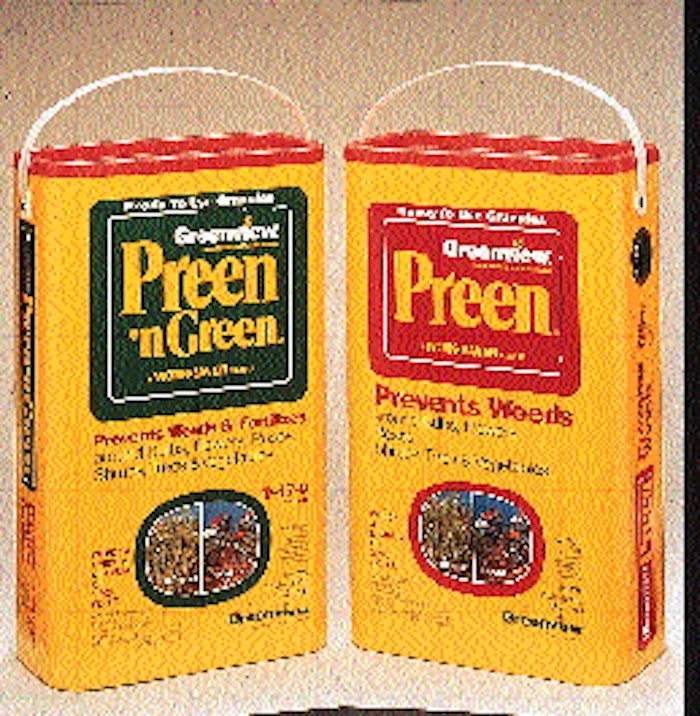 When packagers of all stripes are racing to switch to less expensive packaging, why is Gene Wright moving in the other direction? As the general manager for Preen Products Group, Lebanon Seaboard Corp., Lebanon, PA, Wright found that 15-lb multiwall bags of Preen weed preventer (221/2 lb for the Preen 'n Green variety) was lost in a sea of bags in the fertilizer section. What he needed was an anti-bag, a package that would stand out from the others. In February '96, the company quietly conducted a market test of 15- and 221/2-lb sizes of Preen and Preen 'n Green, respectively, in 4-gal preformed paperboard containers supplied by Dorpak (Cincinnati, OH). During tests, Wright noticed a curious phenomenon: store managers tended to stack the containers in endcap displays or other high-traffic locations. The switch paid off: By the end of the season, Lebanon Seaboard had sold out its entire 250ꯠ-unit test run. The package consists of 45-pt recycled chipboard sheet laminated to a 5-pt structure consisting of kraft/1-mil medium-density polyethylene/kraft, which provides a barrier to moisture and keeps the ingredients from leaching out of the package. The label is printed 4-color offset onto 15-pt clay-coated newsback; it's then glued to the chipboard. The sheet is then die-cut into blanks. Blanks are fed into a forming machine that wraps the board around a mandrel to form the container, which is glued at the joint. The separate paperboard bottom-also cut from the sheet-is glued into place. A white low-density polyethylene carry handle is attached to the package by nickel-plated steel rivets. Though containers for the '96 season had a snap-on reclosable lid, next season Preen will use a custom-designed injection-molded polypropylene lid with a built-in pouring spout and resealable closure. The new lid is sourced through distributor Penn Bottle & Supply (Philadelphia, PA). To accommodate the new package, some modifications were required to the packaging line at the company's Danville, IL, plant. Designed for preformed open-mouth paper and plastic bags, the netweigh filler was adapted to handle the Dorpak containers. One drawback is that the containers must be manually placed under the fill heads, versus automatic bag placement. "And instead of traditional heat sealers or sewers for bag closing, we now manually place the snap-on lids," says Dennis Faith, plant manager. Filling speeds of 15/min remained the same. After filling, containers are manually stacked on a pallet that holds 54 packages. Pallets are then shrink wrapped. Faith says the switch also affected materials inventory. "You could probably get 40ꯠ empty bags on a truck, whereas with these containers you might get less than 4ꯠ. That ratio is one that makes you change the way you do business." Containers will be supplied on a just-in-time basis since Dorpak will be making them on a new forming machine it purchased to handle this business. (The test packages had been imported from Europe.) "The main consideration is that if it's marketable and that's what the customer needs, then we figure out a way to do it," says Faith. And he admits, "The conversion actually turned out to be easier than we anticipated." Clearly the new pack isn't inexpensive. In a world of cost-cutting, Lebanon Seaboard has gone in the other direction. "Obviously there is a marked increase in package costs," admits Wright, "but in terms of getting exposure in stores and having something very dramatic to get consumers' attention, it's worth it." Despite the higher costs, the company doesn't charge a premium to retailers or consumers. "A bag's a bag, and it's hard to get excited about it, I don't care how great the graphics are," says Wright. With this package, "you can't miss it-it's like finding it in a crowd of a thousand. It truly shouts what it is, who it is, and it says it loud and clear."