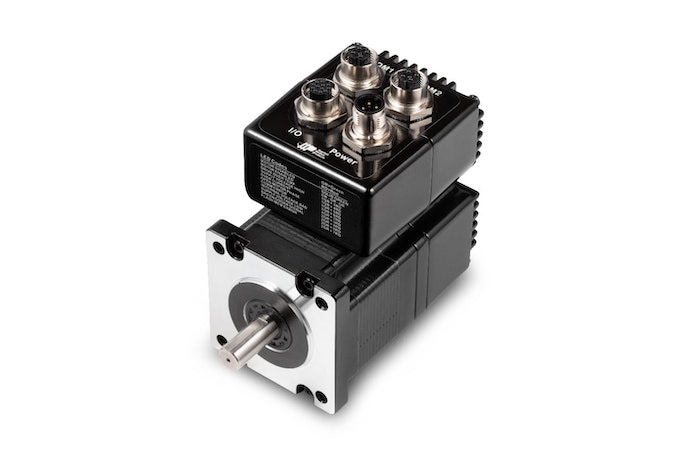 By incorporating two M12 Ethernet connectors instead of just one on each axis, the SWM24IP-3DE integrated stepper motor and TXM24IP-IDG StepSERVO™ integrated motor support more efficient network topologies such as line networks and daisy-chain connections.

EtherNet/IP network communications are the widely used industrial protocol for manufacturing automation applications. With EtherNet/IP, users can control, configure and query a drive using an open, standards-based, industrial Ethernet connection at speeds up to 100 Mbits/sec. All drive and motor features are accessible over the EtherNet/IP network, including more than 100 commands and 130 registers for controlling motion, I/O, configuration, polling, math, register manipulation, and Q programming.

The additional Ethernet communications port on the motors allows for cost savings and design simplification by reducing cables, eliminating bulky cable trays and downsizing network switches. For example, in a star network, every single motor must connect to the central switch on a dedicated cable. In a line network using motors with dual-port communications, only the closest motor connects to the switch with the rest connecting to each other in a daisy-chain configuration. In addition to shortening cable runs between motors, only one port is needed for the entire network, which means a smaller Ethernet switch.

The SWM24IP-3DE and TXM24IP-1DG integrated motors are IP65 rated for use in splash-zone and dirty environments. Each motor features a NEMA 24 (60 mm) mounting flange, which has the same mounting dimensions as a NEMA 23 motor but with a larger shaft to accommodate a higher torque output. Both motors include a built-in encoder for enhanced positioning capabilities. The SWM24IP-3DE can perform stall detection and stall prevention functions for more reliable and accurate performance than an open loop motor, and in a broader range of applications.