Kellogg's to be up front about nutrition

Kellogg adjusts its marketing to children including plans to add front-of-pack nutrition labeling. 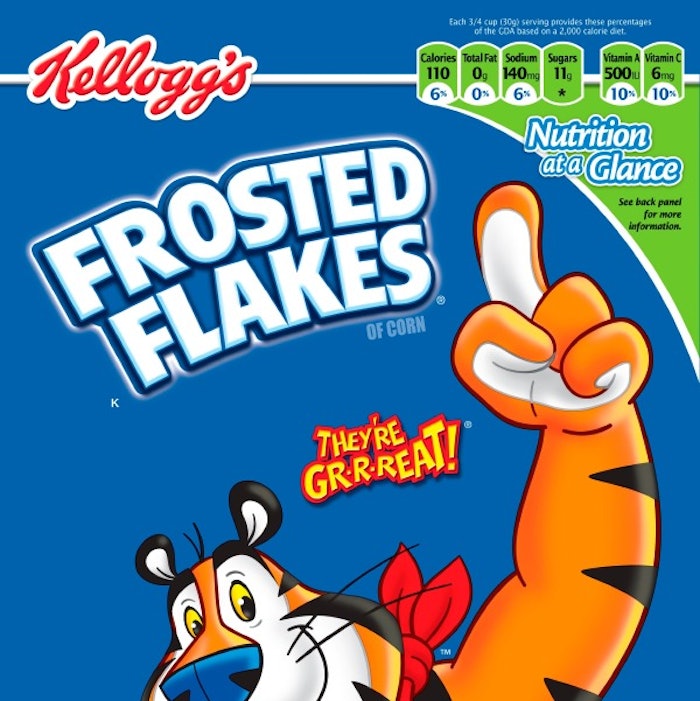 Kellogg Co., Battle Creek, MI, announced June 14 that it is undertaking two major initiatives that further strengthen its commitment to meeting consumers' health and nutrition needs by adjusting what and how the company markets to children and through new front-of-pack nutrition labeling.

One major phase will change the look of its front-panel packaging.

Starting later this year, consumers will see Guideline Daily Amounts (GDAs) on the front of ready-to-eat cereal packages in the United States, Canada, and Mexico. In the U.S., new packaging will feature an easy-to-use labeling system on the top, right-hand corner of cereal boxes, identifying percentages of calories, total fat, sodium and grams of sugar per serving. As such, the front-of-pack labels will also identify the nutrients American consumers need to consume more of including fiber, calcium, potassium, magnesium, vitamin A, vitamin C and vitamin E. The percentages are based on a typical 2,000 calorie daily diet.

The front-of-pack summary gives a quick snapshot of how a food fits into a consumer's daily diet and complements the nutrition label found on the side panel. Kellogg first pioneered the use of GDAs in Europe and Australia, where the labeling approach has been well-received and adopted by the industry. Kellogg is also encouraging other food and beverage companies to join the initiative in the U.S., and is in ongoing dialogue with industry on uniformity in labeling.

Shifting the Mix of Products Marketed to Children Under 12

The Nutrient Criteria set an upper threshold per serving of 200 calories, 2 grams of saturated fat, labeled 0 grams of trans fat, 230 milligrams of sodium and labeled 12 grams of sugar.

Implementation of Kellogg commitments will begin immediately wherever possible. Subject to existing contracts, the company also will not be using licensed characters as food forms, on front of pack or in advertisements unless that food meets the Nutrient Criteria. Full implementation will be completed by the end of 2008.