Salon customers are impressed since Malibu 2000 switched from screen-printed HDPE bottles to a tinted PET with the increasingly popular no-label look.

Sold in professional hair care salons, Malibu 2000's line of shampoos, rinses and other hair care products are all aimed at one thing: rejuvenating the hair. This year the Malibu, CA-based firm decided it was time to rejuvenate its packaging. So it switched from its screen-printed high-density polyethylene bottle and into a film-labeled bottle of polyethylene terephthalate. According to president Tom Porter, the switch has definitely had the desired effect. "If anyone ever wants to know if packaging can make a difference, I'm here to tell you that this has made a huge difference in terms of our presentation," says Porter. "People can't seem to resist picking up the bottle and holding it." Porter knew several years ago that a package redesign was in order, but at first he had a difficult time envisioning containers made from anything other than HDPE. New shapes and the addition of colorants were both pursued at some length, and finally he felt good about a squared-off bottle made of HDPE. However, a representative from container distributor Caliber Packaging (Cerritos, CA) showed him a line of PET bottles injection stretch/blow molded by M&H Plastics (Beccles, Suffolk, England). One look and Porter's search was over. Malibu 2000's products now come in a custom-tinted PET bottle in either the 125- or 250-mL size. "For one thing, it's looking more and more like PET is going to be recognized as the environmentally friendly plastic because it's getting recycled with some consistency," says Porter in explaining why PET appealed to him. "It also has an upscale look and it offers much better product visibility than the old opaque bottle." For graphic impact, Malibu selected a 4-mil clear label of polyvinyl chloride that's screen-printed in up to three colors, depending on product. Converted by Spear (Mason, OH), front and back labels are applied by a Mod 2 tamp-style pressure-sensitive labeler from Quadrel (East Lake, OH) installed in Malibu's Indianapolis, IN, bottling facility. (The label certainly complements the bottle and gives the package a handsome look. But its PVC composition may prove unfortunate from a recycling perspective as that material in the stream of PET recyclate is not the most desirable thing. Then again, neither is the blue tint used in the manufacture of the bottle.) When asked if the idea of getting bottles all the way from England causes any worries, Porter says that if that's the only place where the ideal bottle is made, then the long-distance shipment simply has to be viewed as a necessary step in getting the package he wants. He also says he's had no difficulty getting the bottles thus far. The graphic design of the new label was executed by rothenberg/dean (Torrance, CA). In addition to giving the bottle a more contemporary look than its predecessor, the designer also incorporated a graphic element that suggests reflected light off the water's surface. The watery image is appropriate for a product named "Malibu" and doubly appropriate since purified water is a key ingredient in the products themselves. Disc-style closures are injection-molded polypropylene from Seaquist (Mukwonago, WI). Malibu 2000's line of hair care products debuted in the new package in January. The products sell in a range of $3.99 for a 4.5-oz bottle and up to $6.99 for 8.5 oz. Porter acknowledges that the new package carries a considerable upcharge compared to the old, but a little of that he has passed along to consumers and the rest he says he's happy to absorb when the results have been so good. "For a few extra pennies, we get a great, great look," he says. 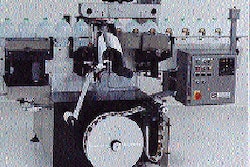 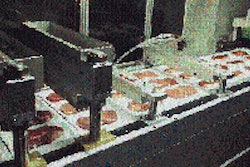 Safeway gets the red in