More details were provided May 15 on the retailer's sustainable scorecard at the Packaging Summit. 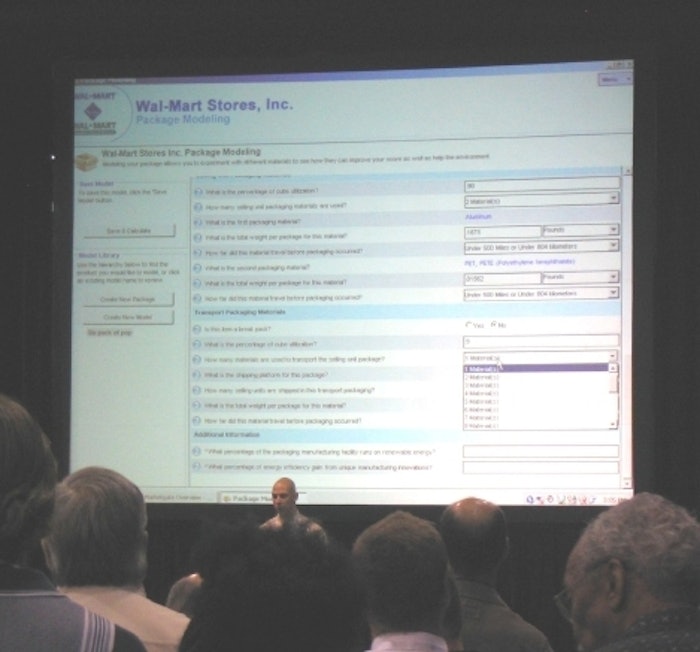 Ted Schneider of Thumbprint demonstrates the Wal-Mart scorecard's modeling software to attendees of the Packaging Summit in May.

Kistler spoke to a packed and attentive luncheon crowd of about 400 wanting to hear more about the Wal-Mart scorecard unveiled last fall on May 15 at the Packaging Summit Expo & Conference (www.pkgsummit.com) in Rosemont, IL, a Chicago suburb. The presentation was followed by a 30-minute question-and-answer session and then live demonstrations of the scorecard online in the show's exhibition hall. Amy Zettlemoyer, director of packaging for Sam's Club, joined in via phone to the Q&A portion of the session to assist Kistler.

Kistler first explained that packaging is one of 14 sustainable networks that the company has formed and all were working on scorecards; packaging is attached to the "zero waste" division that also includes operations. He said that the packaging section now has 300 members, up sharply from about 50 members last fall. He also reminded attendees that the goal of the scorecard was as a key part of an initiative intended to reduce packaging by 5% in the period 2008 to 2013.

Kistler also disclosed two unexpected benefits from the source-reduction of All small & mighty detergent that changed from a ready-to-use to a 3x concentrated form, which he says serves as a poster child of what is possible. There were two surprise benefits in going small with All, he said. "One was that out-of-stocks were reduced by half, and the other was that this represented a $91.4 million reduction in [Wal-Mart] labor dollars." The savings presumably come from having more bottles in the same shelf space as before, thus reducing the occurence and labor associated with restocking.

Some other points that Kistler made:

What weight does the scorecard carry?

Kistler answered that question by paraphrasing comments from Wal-Mart ceo Lee Scott: On Wal-Mart buyer decisions, all things being equal, the better score wins. Even close calls can tip the scales toward the better score.

Our luncheon table included a packaging materials manager from a major consumer packaged goods company, who had this reaction after the presentation: "[the scorecard] is a ticking time bomb." Coincidentally, he and his company were to meet with Wal-Mart about the scorecard the next week.

After the presentation, demonstrations of how to use the scorecard were held in the exhibition hall. Handling the first demo session (which I attended) was Ted Schneider III, distributed software architect, Thumbprint Inc. He demonstrated (see image below) how to input into the scorecard model a canned soda 6-pack unitized with a 6-ring PET plastic carrier. One of the bits of information he input was the weight of each can at 0.1875 lb each. Along with other factors including the ring carrier, the case data, and pallet details and cube efficiency, the scorecard value was 5.55. He then "lightweighted" the can to 0.18 lb each. When this new format was input and calculated, it showed a scorecard value of 4.44. It seems that a smaller scorecard number is better.

Have a scorecard question? You can email Wal-Mart directly at svn@wal-mart.com. Kistler emphasized that the best way to get an answer was to address questions to one topic that is "concisely" noted on the subject line.
For more information, see PW's article, Wal-Mart scorecard early results in, published March 13th, 2007, and visit the Wal-Mart scorecard portal at www.packagemodeling.com

As part of an EIT-funded project, Syntegon, together with partners from industry and research, is implementing the EIT project PACK4SENSE (Paper packaging for SENSitive foods) to develop a sustainable food packaging concept.
Syntegon Packaging Technology, LLC
Dec 17th, 2021