As we realize that the 3Rs approach is failing to achieve our sustainability objectives, plasma gasification stands out as the most promising solution. 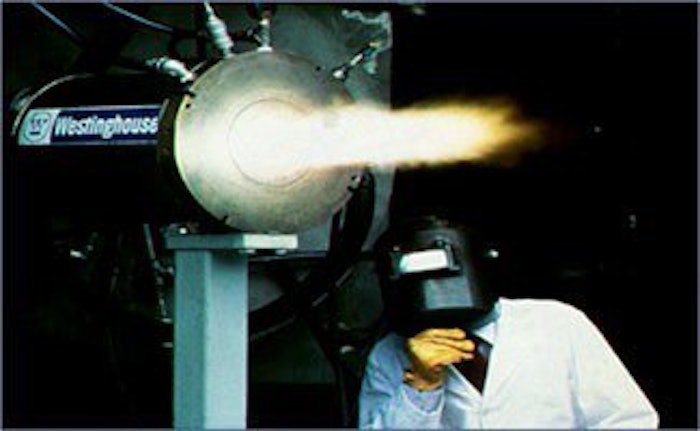 As we realize that the 3Rs approach (Reduce, Reuse. and [selective] Recycle) is failing to achieve our sustainability objectives, plasma gasification stands out as the most promising solution. While gasification is a well-known process that has been used for centuries to produce fuel gas and chemicals, plasma gasification is a unique version of the process for its use of plasma to achieve the high process temperatures required to induce desired thermochemical reactions. Traditional gasification uses partial combustion of a uniform feedstock, such as coal or biomass, to generate process heat. Plasma provides temperatures useful for a robust, mixed-feed gasification, which is necessary for lightly sorted, single-stream municipal solid waste (MSW).

What is plasma gasification?

Plasma for the plasma gasification process is obtained through two primary means, namely electrical arc and plasma torches. Electric arc plasmas are commonly used in metal foundries capable of melting hundreds of tons of iron and steel. Plasma torches create a plasma plume by forcing gas between electrodes. Plasma torches can achieve local arc temperatures in excess of 5,000°C (Figures 1a, 1b).

As a thermochemical conversion process, the goal of plasma gasification is to break down organic materials to their basic elements and then recover them as a useful gas product, melt and recover metals, and to recover everything else within a vitrified rocky matrix. A sketch of a plasma gasification unit is shown in Figure 2.

The desired gaseous product is known as syngas. Syngas is a hydrogen-rich mixture of carbon monoxide and hydrogen that can be used as a chemical feedstock to produce hydrocarbons, biofuels, and/or plastics. Or, syngas can be used directly as a clean burning fuel to produce electricity. Syngas can produce clean and green electricity. The fate of all plastic packaging sent to plasma gasification is conversion to syngas. Plastic packaging materials are comprised mainly of Carbon (C), Hydrogen (H), and Oxygen (O). Regardless of the types of plastics fed into the process, all are converted to syngas along with other organic materials.

Plasma gasification process temperatures are sufficient to melt virtually all earthly materials, including metals and minerals. Metals may be recovered as ingots and minerals as vitrified glassy rock. (Figure 3)

Since bulk metals and glass, such as cans, jars, and bottles, are easily recovered prior to the plasma gasification process, and these materials enjoy successful and sustainable recycling markets, these should continue to be recycled. However, consumer sorting, duplicate collection, and precise materials recovery operations are not necessary since plasma gasification can accept whatever “slips through.” Therefore, simple and inexpensive bulk sorting of single-stream MSW is all that would be required.

Rigid, semi-rigid, and flexible plastic packaging often contain embedded or attached metals such as bands, springs, bearings, foils, and metallization. The primary metals in packaging are steel and aluminum. MSW contains other commodity metals such as copper, brass, and zinc. If electronics waste is included, then there may be precious and rare earth metals. These materials will melt and collect in an agitated molten pool at the bottom of the plasma gasifier. The plasma gasification process benefits from this molten pool from improved heat transfer and thermal capacity. As excess material accumulates, it is poured off to create metal ingots and vitrified rocky slag. Depending on specific content and market conditions, these materials can either be subsequently processed to recover purified components or used directly in a variety of applications.

One of the most promising aspects of plasma gasification is its robustness in terms of being able to accept the full spectrum of packaging materials including different metals, silicones, different plastics, and fiber regardless, of package structure. With plasma gasification, all materials are recoverable in environmentally-safe and useful forms.

Recycling is not enough

While the 3Rs play an important role in terms of material use efficiency and raw materials stewardship, they will never be capable of solving problems with waste. Many packaging materials simply cannot be recycled without suffering degradation. Even if recycling was not stymied by complex and often unsuccessful sorting and collection, recycled and repurposed materials ultimately reach end-of-life. Many important packaging materials, such as multilayer plastic films, metallized films, and laminates containing foils and fiber, are not recyclable using other methods. Even with traditional recycling, we need a way to recover materials that can no longer serve their functions and ultimately become waste.

Currently, the primary outlet for waste is landfill. Other options exist, such as composting and incineration, but of all available options, only plasma gasification can achieve circular economy sustainability. For the case of composting, except for biomass compost, MSW-derived compost is often contaminated and environmentally harmful as a soil amendment. The composting process also releases gaseous emissions, but without energy recovery, which is wasteful. Incineration recovers energy from waste through combustion but requires highly sorted and refined feedstocks, affectionately known as refuse derived fuel (RDF). Incineration produces ash, which is often toxic, as well as complex exhaust that must be treated against ever tightening emissions regulations.

As the packaging industry increasingly sources plastic from renewables such as sugarcane, emissions become increasingly “zero-net-carbon.” Additionally, fossil fuel use is offset by clean energy produced via plasma gasification. The greatest energy efficiencies are achieved when syngas is used to power combined cycle turbines. Combined cycle involves a gas fired turbine, which produces electricity and heat. Heat is then used to produce steam to drive a second turbine to produce even more electricity. Modern power plants make use of combined cycle power. It is estimated that about 15% to 20% of our energy needs can be met using plasma gasification. Ultimately, plasma gasification systems can mine waste from existing landfills, restoring land for better uses.

Ocean litter is mainly a product of relatively poor island nations that import both fuel and packaged goods. Availability of plasma gasification in these nations will reduce their need for expensive fuel imports, simplify waste collection, and convert waste into clean energy instead of ocean litter. Savings in fuel imports provide a means and incentive to improve waste collection in order to maximize clean energy production from MSW using plasma gasification.

Adoption of plasma gasification by municipalities will require education and outreach. The University of Florida is spearheading this effort by organizing an industry consortium around this theme as well as a Center for Research and Outreach. Packaging material suppliers and users are encouraged to join this consortium in order to support development and dissemination of science-based information to the public and community leaders in order to promote adoption of plasma gasification as the best choice for communities to treat MSW.

Bruce Welt, Ph.D., is a professor at the University of Florida/IFAS, Packaging Engineering Program.