For now, marijuana remains a schedule I controlled substance in the U.S. 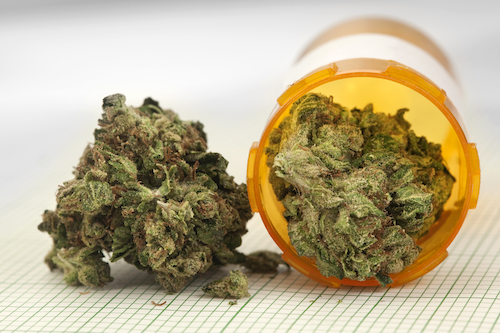 For now, marijuana remains a schedule I controlled substance in the U.S.

Today, the Drug Enforcement Administration (DEA) made several announcements related to marijuana, including the denial of two petitions to have marijuana removed from schedule I of the Controlled Substances Act (CSA). One petition sought rescheduling from schedule I to schedule II, while the other petitioned for rescheduling the substance to “any schedule other than schedule I.” (Note: the DEA states that marijuana can only be placed in schedule I or II in its Preliminary Note Regarding Treaty Considerations in Response 1 and Response 2.)

The DEA requested a scientific and medical evaluation and scheduling recommendation from the Department of Health and Human Services (HHS), which was conducted by the FDA in consultation with the National Institute on Drug Abuse (NIDA). According to the DEA release, “The HHS concluded that marijuana has a high potential for abuse, has no accepted medical use in the United States, and lacks an acceptable level of safety for use even under medical supervision.”

On the FDA’s site, under “FDA and Marijuana: Questions and Answers,” the Administration acknowledges that several states are considering or have already passed laws removing medical marijuana restrictions, and notes there is particular interest in cannabinoid oil for use in treating childhood epilepsy. They further state that they “welcome the opportunity to talk with states who are considering support for medical research of marijuana and its derivatives to provide information on Federal and scientific standards.”

Despite the setback, the DEA also announced a policy change that will increase the number of authorized marijuana manufacturers that supply researchers. As the release notes, “This change illustrates DEA’s commitment to working together with the FDA and NIDA to facilitate research concerning marijuana and its components.”

For more information, see the full release at the DEA's site here.

The DEA’s announcement that it would not reschedule marijuana from schedule I (same classification as heroine and LSD) is a blow to patients, advocates and states who are working to increase medical marijuana access.

Moving marijuana down to schedule II would have been a step in the right direction for kids and adults with all kinds of illnesses (especially certain types of seizures) that may benefit from increased research and resulting medical treatment.

The DEA requested a scientific and medical evaluation from the Department of Health and Human Services (HHS), conducted by the FDA in consultation with the National Institute on Drug Abuse (NIDA).

When the DEA announced on 8/11/16 that it would keep the drug as schedule I, it cited potential for abuse and “no currently accepted medical use."

It’s quite difficult to produce large-scale FDA-approvable research studies when marijuana is a schedule I drug. Until the announcement, only one entity (the University of Mississippi) could legally grow marijuana for studies. This limitation has left people in a catch-22 because it’s hard to obtain marijuana, get approval and perform research as a schedule I drug, but the DEA won’t reclassify until they (and regulatory bodies) see research.

Though it may be correct in the most technical way, the claim of “no currently accepted medical use” is a tough pill to swallow when considering the issue logically.

While states will continue their own legalization efforts, maintaining marijuana as a schedule I drug affects public opinion, medical research and makes banks reluctant to get involved, meaning that dispensaries will have to keep dealing in cash (dangerous for obvious reasons). Also, according to Denver accountant Jordan Cornelius, the federal government’s treatment of marijuana precludes state-legal marijuana businesses from tax deductions afforded to other business, with some noting that their effective tax rate ranges from 60 to 90 percent.

This stance is also keeping people from a potentially life-saving or life-improving treatment by not allowing for the proper research. Desperate parents, like the ones in this story, travel to states like California and cross state lines with CBD in their trunks for their seizure-ridden children. Others have relocated to Colorado to live where they can access the substance.

Of course, it’s important to note that marijuana is not a magical drug that will cure everything, and is not without side effects. More U.S.-based research is needed. In theory, full federal legalization would present a problem for companies that manufacture drugs that natural marijuana would compete with. And as mentioned above, the DEA states that marijuana can only be placed in schedule I or II.

The idea that people may potentially be in worse health because government agencies or companies don’t want to let go of power or profits is disheartening.

It would go along way toward public trust if research efforts were encouraged, and if the U.S. government could one day acknowledge that there are medical uses, especially considering that over half of the country (25 states and the District of Columbia) has approved forms of medical use. The DEA did announce that other entities will be allowed to apply to register and grow marijuana for research, so that is a positive step forward.

The CARERS Act is a bill currently in the U.S. Senate. Co-sponsored by 19 senators (Republicans, Democrats and an Independent), the bill seeks to reschedule marijuana, among other actions that would bolster medical access for patients. According to Michael Collins, deputy director of national affairs for the Drug Policy Alliance, supporters of the bill are urged to reach out to their senators, particularly in red states.