Switching over from manual recordkeeping to digital tracking has provided the producer with a more accurate view of walnut quantities, qualities, and a host of other attributes that were previously difficult to monitor.

Developed in 2003 to vertically integrate the walnut farming business of sister company Barton Ranch, GoldRiver Orchards processes almost 30 million lbs of walnuts a year. In mid-2013, GoldRiver moved to a new 104,000-sq-ft facility in Escalon, Calif., to better serve the approximately 100 growers in its network, most of which are in the Escalon area, east of San Francisco. The HACCP-certified processing plant is designed for maximum efficiency and quality.

The processor sells its walnuts in bulk packaging—in sacks or boxes, typically either in their shells to be cracked by consumers at home or as kernels that have already been cracked and sorted. Producing this number of walnuts does not come without some difficulties, especially with the level of variety in the shelled walnuts.

GoldRiver requires detailed visibility through all stages of sorting and grading, as well as through sales. Managing sales, which are mostly make-to-order, requires knowledge of what the company has in raw materials, work-in-process (WIP), and finished goods at any given time. Until recently, that was all tracked mostly manually, with color-coded WIP cards used to describe the different types of walnuts moving through the plant.

“Particularly on the kernel side, inventory’s very difficult. There are a number of different varieties. Once they’re shelled, they change form,” says Matt Metzner, vice president of GoldRiver Orchards. The walnuts can decrease in weight by as much as 45% without their shells. They’re broken into different-sized pieces, and the processor learns more about the walnuts’ color. “Because of all of those changes that happen naturally, it’s really tough to understand what you have in terms of WIP.”

It was an inefficient and unreliable tracking process and did not provide the real-time visibility needed. Spreadsheet-based reports—often generated four or five times a day—were labor-intensive to update and publish to managers, and were also prone to errors. And the inventory moves so quickly from the yard into various production steps, that as soon as a report was generated, it was out of date. 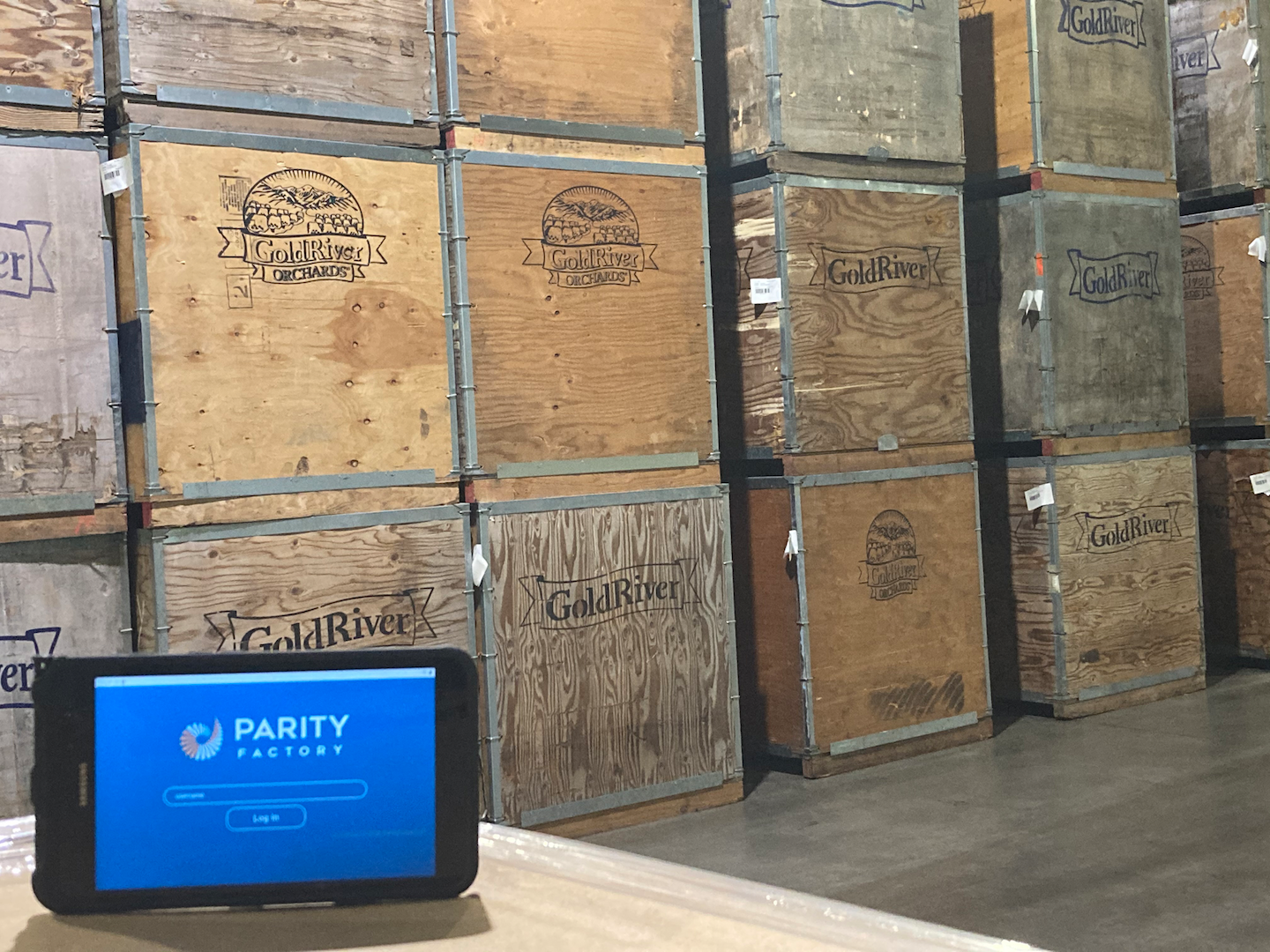 ParityFactory software gives GoldRiver Orchards real-time insights on its walnut inventory, providing a much better idea of what is available to sell.GoldRiver OrchardsParityFactory tracks product movement through all production phases. GoldRiver operates as a batch manufacturing plant, Metzner explains, with different stations rather than one consistent conveyor belt. Plant operators are equipped with mobile scanners and label printers to easily record the flow of materials, increasing accuracy and speed by eliminating pen-and-paper recordkeeping, and also reducing the work involved.

As bins are filled, weights and quality data are recorded on a tablet that’s connected to the ParityFactory web app. Barcode labels are printed along the way and product details are quickly scanned for full visibility of raw materials, WIP, and items shipped. Real-time visibility ensures the team always has a clear view of what is available for finished case packaging.

As each finished pallet of goods is recorded, information is included about the necessary lot, quality, and quantity. Allocations then provide a guided pick plan to the shipping team to guarantee each customer receives the correct lot.

Results in a nutshell

The ability to create custom fields in the mobile app allows GoldRiver to record and accurately track every detail specific to its operation throughout the production process, including kernel and jumbo percentages used for production management. 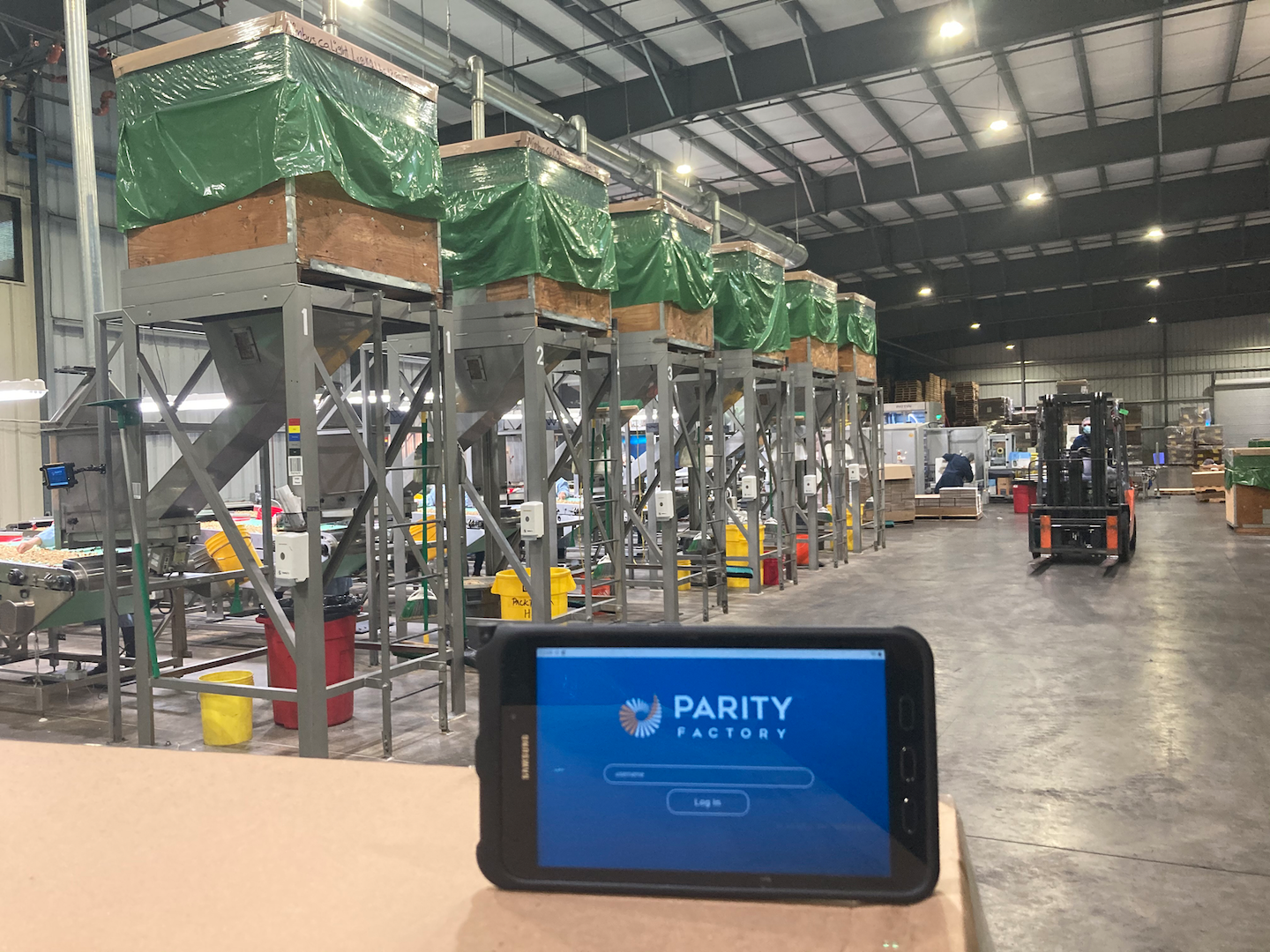 GoldRiver requires detailed visibility through all stages of sorting and grading, through to shipping. ParityFactory software tracks product movement through all production phases.GoldRiver Orchards“The Parity web app’s great,” Metzner says, explaining how easy it was for GoldRiver’s employees to transition from an Android technology that many of them use on their phones to the Android tablets being used in production. “They’ve been able to easily convert from a tool they’re using every day to using a very similar tool in the plant.”

With a bilingual staff, Metzner adds, the app’s ability to crossover between languages has been critical. “We wouldn’t be able to do this if the app was difficult to use.”

As a mostly make-to-order business, GoldRiver has been particularly happy with the visibility that the ParityFactory software provides for sales. “Taking our WIP or raw materials and figuring out what we have available to sell—that’s our huge value-add for ParityFactory,” Metzner says.

Particularly toward the end of the season, Metzner adds, it’s important to track that inventory within a few percentage points to better understand what’s left to sell. Before using ParityFactory, it was not so precise. “We would end up with several containers of product that we wouldn’t be able to sell or at least not at the right time,” he explains.

“Prior to deploying ParityFactory in our plant, we would over or underestimate our final inventory by 120,000 to 240,000 lbs. With ParityFactory, we reduced that figure to 15.6 lbs, or less than one case,” Metzner says. “That degree of precision of inventory makes us a lot more competitive.”

Though Metzner joined the company later, he knows that one of the big reasons that the team at GoldRiver chose ParityFactory was for its service. “They could tell during the initial pitch process that the Parity guys are eager to make their product better and are always looking for ways to improve,” he says.

ParityFactory’s engineers worked with GoldRiver to develop a digital grading system within the app, Metzner notes. “Any time we receive loaded walnuts from a grower, they’re graded by a third party,” he says, explaining the variety of attributes that are typically written down on carbon paper. “Parity helped us develop a tool so that we could grade that digitally.” Beyond inventory accuracy, it has helped GoldRiver produce loads faster because they know exactly what they have on hand, Metzner adds.