New vegan nail polish brand lets consumers ‘try’ the product before purchase through the use of a custom cap fitted with a fingernail-style chip painted with the color of the polish inside. 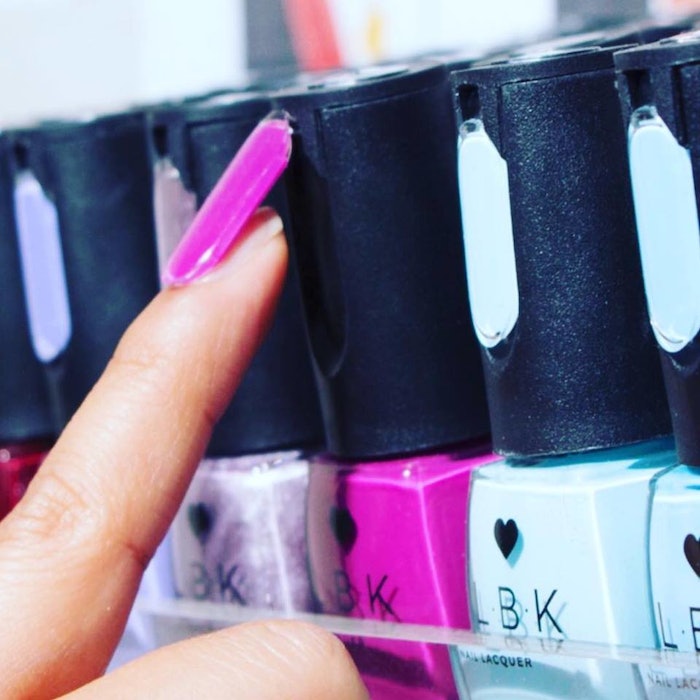 To test the polish, consumers overlay the component on their own fingernail to ‘try’ the color without having to open the bottle.

Nail polish bottles, while ubiquitous, have long been the bane of consumers’ manicure and pedicure experiences, especially with the growing popularity of the gel polish market. While the nail-polish color may appear one way in the bottle, once on the nail, it may look very different and not at all what the consumer expected. Gel polish has exacerbated the problem, as the packaging requires UV protection, resulting in an opaque bottle.

In 2012, Aurel Tony Kemeny Jr., Founder of Kemeny Designs and LBK Nails, set about to create a nail lacquer product that would not only offer one of the most vegan-friendly formulas, but also eliminate the issues associated with color matching at salons and retail. His solution: a multifunctional bottle cap with a hinged design that includes a fingernail-like component painted to match the polish inside the bottle. To test the polish, consumers overlay the component on their own fingernail to “try” the color without having to open the bottle—a practice that is especially vexing for retailers.

Shares Kemeny, it is estimated that stores lose 2% on maintenance due to consumers opening bottles of nail polish at point-of-sale for testing, with some retailers having to put paper on the retail displays to avoid damage. “It’s not good for the bottles to be opened and tested, it does nothing for the life of the polish, and it can cause contamination,” he says. “It just isn’t a very nice thought that your brand-new nail polish has been tested by other shoppers. This is a worldwide problem.

“Taking away the guesswork without having to open the bottle and risk a potential mess for cleaning and maintenance retail staff, the LBK Nails invention is on-point. Bottles and retail displays aren’t damaged, no product testers are needed, and customers have fewer returns.”

According to Kemeny, he spent three years developing prototypes, working with engineers, conducting tests with consumers, and perfecting the painting and manufacturing process for the Innovator Caps and their True Color Match tips. He says that while the invention may seem simple, “the truth is, it’s extremely complex in all the functions it needs to address.” He explains, “For example, the tip must be centered on the front of the bottle when tightened, and it must be strong enough to ensure it can’t be broken off. The ability to paint millions of tips with the actual color while keeping the cost of goods to a minimum is another challenge.”

Kemeny worked with engineer Randy Jordan, now retired, to design and engineer the nail polish cap and tip. The cap is made of talc-filled polypropylene and is engineered to be perfectly weighted in the consumer’s hands for better control when applying the polish. The tip is clear, which allows the consumer’s natural skin tone to come through, and is made of a proprietary plastic. Says Kemeny, “We tested many plastics for durability, clarity, and function before finding the perfect compound.”

The mold maker and cap supplier is VEM Tooling. LBK Nails paints the nail tips in-house at its Anaheim, CA, facility using a proprietary robotic process. “It’s been one of the major challenge we’ve overcome to perfect the mass production process, and for the moment, our robots must remain behind closed doors,” Kemeny says.

The company introduced its LBK (Love by Kemeny) 7 Free Gel Effect Formula in March 2018 in 48 colors. Gift and sample boxes are supplied by Honest PP&D Ltd. The “7 Free” descriptor indicates the polish is free of seven of the most common chemicals found in nail lacquer: toluene, dibutyl phthalate, formaldehyde, formaldehyde resin, camphor, ethyl tosylamide, and xylene. The lacquer is highly pigmented and dries quickly to a gel-like finish without the need for UV lamps. LBK Nails currently sells the nail lacquer product on its website to U.S. and European consumers and is working to grow distribution throughout the world. Kemeny hints the company will be introducing a “totally new type of gift box packaging” for holiday retail.